Thai people believe politics and corruption are the most severe problems facing the country, followed by the lack of democracy and a weak economy, according to the result of an opinion survey by Suan Dusit Rajabhat University, or Suan Dusit Poll.

The poll was conducted on April 16-20 on 2,054 people throughout the country to compile their views on what's good, bad and most loved about Thailand.

Asked what they love and cherish most about the country, 43.07% of the respondents cited the nation, religion and monarchy; 33.68% Thai culture, tradition and identity; 27.88% the family institution; 21.86% the country's natural resources and environment; and 17.06% national treasures such as historical sites and palaces. 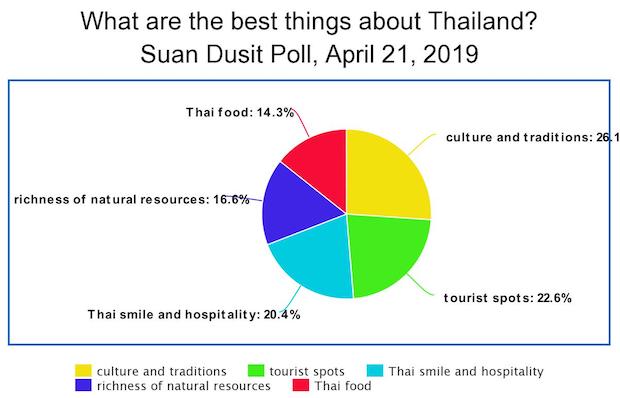 Asked what is worst about Thailand, 52.22% cited politics, the behaviour of politicians and corruption; 25.80% the lack of democracy and freedom; 19.82% the poor economy; 19.18% the lack of unity; and 15.34% air pollution, garbage and traffic conditions.

Inequality of wealth did not appear to have been offered as a possible answer choice in the poll.