Navy personnel begin detaching the couple's living module from the floating base in the sea off Phuket on Monday. (Photo by Achadtaya Chuenniran)

PHUKET: The navy has successfully towed a controversial floating seastead from its location in the Andaman Sea, southeast of Phuket island, to the shore on Monday evening

HTMS Rin, a tugboat, will tow its base and poles to Phuket Deep Sea Port Monday night or Tuesday morning, said RAdm Withanarat Kochaseni, the deputy commander of the 3rd Naval Area who supervised the mission.

The operation engaged naval officers, construction experts, divers and employees of the company which had installed it to ensure the structure, which is treated as evidence, was intact.

Officials were also planning to seek court arrest warrants for the US-Thai couple who had it built and then  anchored 14 nautical miles (about 26km) off the coast.

"The couple announced on social media they were independent of the judiciary or law of any state,  including Thailand, and invited other people also interested in building similar residences to what would apparently become an independent community.

"Their action is seen as undermining the sovereignty of Thailand," he said.

VAdm Sittiporn Maskasem, commander of the 3rd Naval Area, said the original builder of the floating structure had given the navy advice on its removal.

"The structure was at risk of overturning. No one was in control of it. It had no warning light. It was a danger to ships at night. Commercial vessels and oil tankers use this route. If there was a collision oil would leak into the sea and the damage would be uncontrollable," VAdm Sitthiporn said.

Phuket deputy governor Supot Rodrueang na Nongkhai said officials would press charges against the couple next week at the soonest, and they would face arrest warrants. 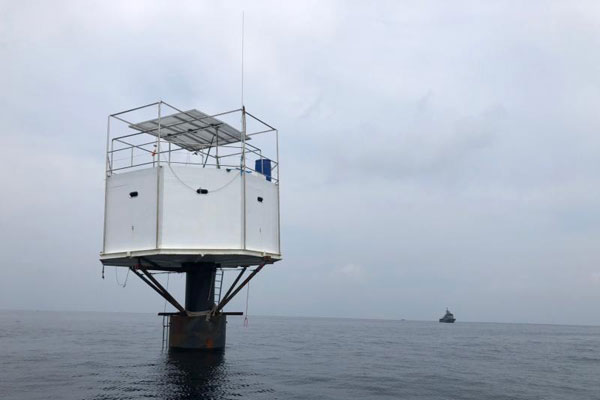 The navy considers this platform, built off the coast of Phuket, to be a threat to Thai sovereignty, and illegal. (Navy photo)

Happier times: Chad Elwartowski and his wife Supranee Thepdet (Nadia) share what it’s like to live on the seastead and their hopes for the future. (YouTube/seasteading)