A seastead cabin is lifted ashore at Phuket port on Wednesday.

PHUKET: The detached floating seastead cabin was lifted from the sea and placed on dry land for police inspection as authorities gather evidence to take legal action against the US-Thai couple. 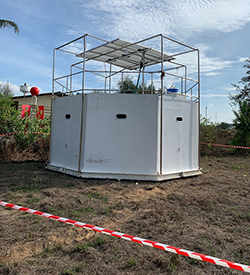 The cabin is seen on the ground at the Phuket port on Wednesday. (Photo by Achadtaya Chuennirun)

Wiwat Chidcherdwong, chief of the Marine Office based in Phuket, said on Wednesday the octagon-shaped cabin was now standing on the ground in the Phuket deep-sea port compound. The area was sealed off.

Police from the Wichit police station and forensic experts have started to examine the floating house as evidence. Authorities plan to charge Chad Elwartowski and his wife Supranee Thepdet with violating Thai sovereignty, the official added.

The couple is still on the run and authorities said on Tuesday that they were last traced to Tarutao island off Satun.

The floating cabin and its attachments were towed from a location 14 nautical miles (about 26 kilometres) off the coast on Monday, and they reached the shore on Tuesday.