This small hailstone fell in the Phahon Yothin area of Bangkok during a storm on Thursday. (Photo from luk khaoneo via @fm91trafficpro Twitter account)

Some areas in northern Bangkok were pounded by a summer storm, strong winds and sometimes small hailstones on Thursday.

Residents took to Twitter to show small hailstones in Phahon Yothin area during the rain.

Hailstones are rare in Bangkok but more common in the northern and northeastern regions, including Mae Rim district in Chiang Mai on Thursday.

The Bangkok storm delayed 18 flights carrying a total of 3,000 passengers scheduled to land at Don Mueang airport, the Immigration Bureau said. One flight was diverted to Suvarnabhumi airport and another to U-Tapao in Rayong. 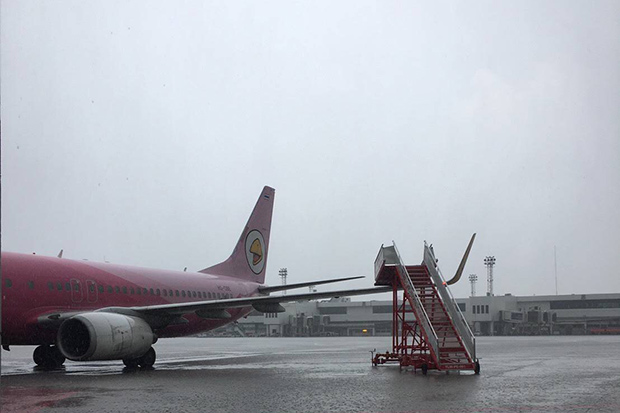 Passenger boarding steps blown along by the wind damaged the wing of this Nok Air plane at Don Mueang airport on Thursday.

The strong wind moved the boarding ladder of a Thai Lion Air plane on the ground at Don Mueang. The steps hit the wing of a nearby Boeing 737-800 of Nok Air flight DD7810, due to depart for Nakhon Si Thammarat at 2.05pm. The flight was cancelled and the 176 passengers had to return to the airport terminal. They later boarded another aircraft that left at 3.30pm.

The Meteorological Department has forecast summer and electrical storms in the northern, northeastern, eastern and central regions, including Bangkok, on Friday and Saturday.