Private hospitals have filed a lawsuit with the Central Administrative Court against the Commerce Ministry's proposal to put medical and healthcare expenses on the state price control list.

They said the proposal and ensuing attempts to control the prices of such products and services have damaged their business.

Commerce permanent secretary Boonyarit Kalayanamit said the Commerce Ministry recently received a letter from the Central Administrative Court informing it that the Private Hospital Association had filed the lawsuit in the middle of this month against the Central Committee on Prices of Goods and Services, which on Jan 9 approved putting medical supplies and service charges on the state price control list as part of efforts to stem price-gouging.

The cabinet approved the ministry's proposal on Jan 22. 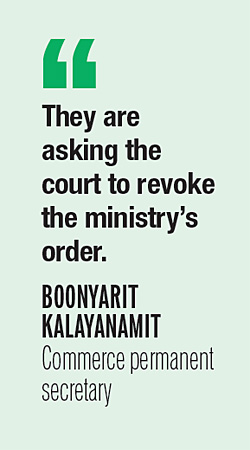 "They are asking the court to revoke the ministry's order and remove medical supplies and service charges from the state price control list," Mr Boonyarit said. "They claim their business has been hard-hit by the ministry's proposal."

He said the defendants include the commerce minister, the permanent secretary and the Internal Trade Department's director-general.

"The ministry does not foresee any problems defending this in court, as we are confident that we work with the principles of honesty and benefit to the public," Mr Boonyarit said.

Whichai Phochanakij, director-general of the Internal Trade Department, who chaired a meeting of the working group tasked with studying the production costs of medicines and medical services, said the department has worked under the law after periodic complaints from patients about overcharging by private hospitals.

Mr Whichai said the ministry's legal team will submit the documents and information to the Central Administrative Court within 15 days.

The Foundation for Consumers last year gathered over 50,000 signatures on a petition calling for the state to impose regulations on the price of procedures at private hospitals. The proposal has been raised by the Public Health Ministry's Health Services Support Department as part of a joint effort to regulate prices at private hospitals.