A visitor looks at paintings of His Majesty the King at an exhibition dedicated to the monarch. The event, which features more than 150 works by more than 100 renowned artists, will run until May 26 at Seacon Square Srinakarin in the capital. (Photo by Somchai Poomlard)

City Hall is bracing for an influx of more than 150,000 people, expected to flock to Sanam Luang for His Majesty the King's coronation ceremonies this weekend.

Visitors are expected to pack the grounds and surrounding roads near the Grand Palace to pay their respects to the King, who will perform the liap phranakhon ritual on Sunday, during which His Majesty will make a short trip to several parts of the capital, City Hall officials said.

A 21-gun salute will also be fired at the start of the trip, which is scheduled to begin at 4.30pm.

"About 200 medical teams will be on standby to take care of attendees every 100 metres along the route," Phonthep Sae-Heng, chief of the city's Erawan medical emergency centre, said on Monday.

The permanent secretary for the Prime Minister's Office, Phatcharaphon Insiyong, also said on Monday that people have already begun responding to the government's invitation to take part in the coronation celebrations, and a large crowd is expected to gather to catch a glimpse of His Majesty the King on the balcony of Sutthaisawan Prasat Throne Hall, in the Grand Palace on Monday.

The event will also be broadcast live on TV, she said.

Ms Phatcharaphon said His Majesty wants everyone to be treated as his guests.

"The government will set up temporary cooking facilities to cater to those who turn up for the historic event, which will run from Saturday through to Monday," she said.

About 80,000 boxed meals will be prepared for attendees, Ms Phatcharaphon said. 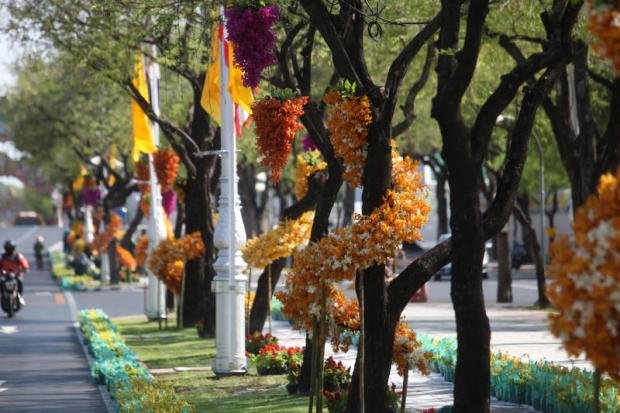 Trees along Ratchadamnoen Avenue are decorated with flowers as final preparations get under way for His Majesty the King's coronation ceremonies, which are taking place from Saturday through to Monday. Decorative lights have also been installed along the avenue. Wichan Charoenkiatpakul

That said, the permanent secretary added, those who wish to attend the events are advised to bring enough water, as well as umbrellas and hats as high temperatures are expected throughout the weekend.

Prime Minister Prayut Chan-o-cha, in his capacity as the chairman of the coronation committee, will convey best wishes on behalf of all Thais to the King, who is expected to make a speech afterwards, she said.

Those interested in seeing the King's procession are advised to arrive as early as 3pm at the designated meeting point on Sanam Chai Road, said Ms Phatcharaphon.

"When His Majesty leaves the palace grounds at about 7pm, people will have the opportunity to see the King along the route of the royal motorcade," she said.

At about 7pm, a light and sound show will begin in lieu of traditional fireworks -- during which drones will be used to spell out the King's coronation message, she said.

As more than a hundred thousand people are expected to converge on the venue for the celebrations, security will be beefed up and first aid services, drinking water, food as well as portable toilets will be provided, she said.

Bangkok Mass Transit System Plc (BTS), the operator of Bangkok's skytrain service will offer free rides on the skytrain's main section between Mo Chit and On Nut stations on Sunday from 6am until midnight.

On Saturday and Monday, free rides will be offered throughout the entire skytrain network, said the company.