Thirteen illegal migrant workers are found inside a mail truck in Rattaphum district, Songkhla, in the early hours of Tuesday. The driver of Thailand Post mail truck and another man were arrested. (Photo by Assawin Pakkawan)

SONGKHLA: A driver of Thailand Post and an accomplice have been arrested in Rattaphum district for allegedly transporting 13 illegal Myanmar workers on a mail truck heading for Malaysia.

A combined team of police, immigration officers and soldiers followed the suspected mail truck with Bangkok licence plates travelling on Asia 41 Road and managed to stop it at Khuha intersection in Rattaphum district at around 12.30am.

Officers found 13 Hindu men from Myanmar and their belongings in the back of the mail truck. None of them carried official documents, said a member of the team, led by Pol Col Nttthaphakhin Khwanchaiyaphuek, deputy commander of the immigration police division 6, and Pol Col Yotsawan Krachangwong, superintendent at Provincial Police Region 9.

According to police, the migrant workers had entered the country along the Thai-Myanmar border in Kanchanaburi province and took shelter in Samut Songkhram province. They were then taken to Songkhla before being transported to Malaysia via natural pass in Sadao district of this southern border province.

The suspects confessed to having transported illegal migrants on several occasions and were paid 1,500 baht per person.

The arrest of the migrant workers followed confessions by a human trafficker that it was more convenient to use mail trucks to transport illegal migrants than using pickup trucks or passenger buses since they were less noticeable, said officers.

The 13 illegal migrants were charged with illegal entry and would be detained at Rattaphum police station. The driver of the mail truck and his accomplice were held in police custody for further questioning.

Authorites would extend the investigation to find more people involved in the human trafficking.

Meanwhile, state-owned Thailand Post launched a fact-finding probe into the use of the mail truck to transport the illegal migrants and sacked the driver.

In a statement, Thailand Post said the agency had launched the probe promptly. Mr Thanachai, the mail truck driver, was found to have committed serious legal and disciplinary violations. The agency resolved to fire him and would give full cooperation to police. 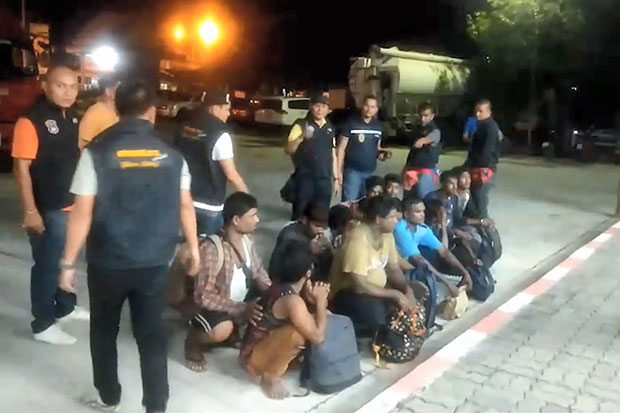 Illegal Myanmar migrant workers are taken from a mail truck of Thailand Post in Songkhla in the early hours of Tuesday. (Photo by Assawin Pakkawan)