Two held in slaying of policeman during drug sting

Two drug trafficking suspects who surrendered on Friday, a day after the killing of a police officer in Surat Thani, are interrogated along with another suspect by police in Phrasaeng district. (Photo by Supapong Chaolan)

SURAT THANI: Two men accused of killing a policeman by driving over him during a drug sting that went wrong on Thursday night have surrendered to police in Phrasaeng district of Surat Thani province.

The development came as the body of the slain officer — whose policeman father also died on duty before he was born — was taken to his home province of Nakhon Si Thammarat for bathing rites on Saturday.

Surachate Wanluea, 24, escorted by his relatives, turned himself in to Pol Col Dussadee Hiranrat, chief of the Phrasaeng district police station, on Friday after police intensified the hunt for him and another suspect.

Officers said Mr Surachate denied firing shots at police who tried to arrest him, but admitted he drove a car over one of the officers as he tried to escape. However, he lost control of the vehicle, which plunged into a roadside ditch.

The incident occurred on an uphill road in Ban Pak Suad village of tambon Phrasaeng in Ban Ta Khun district about 9pm, when a team of undercover police were taking delivery of drugs from one of two suspected traffickers who had arrived in a silver Honda City sedan.

As police moved in to arrest them, the driver in the car fired gunshots at the officers. Pol Sen Sgt Maj Poonkrit Buakaeo, a 46-year-old native of Nakhon Si Thammarat province, was hit and fell to the ground.

The gunman, alleged to be Mr Surachate, then drove the car over the fallen policeman before fleeing the scene with his accomplice, officers said.

Former village head Charoen Muenintor contacted Pol Maj Gen Apichart Boonsriroj, the Surat Thani police chief, to arrange the surrender of Mr Wanchai, who was his nephew. The suspect had fled to take refuge at a temple, about 5 kilometres from the scene of the attack. 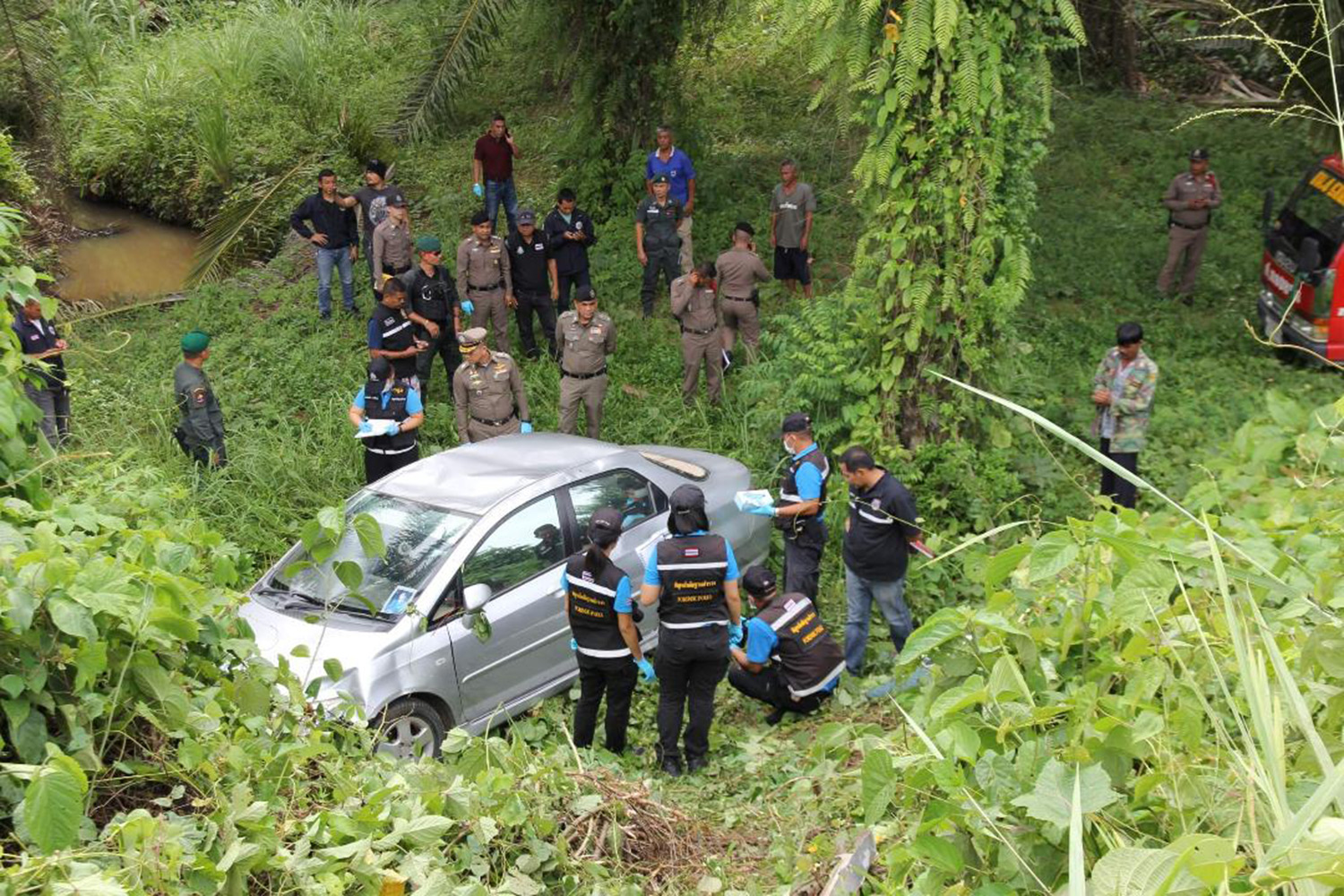 Police and forensic officers on Friday examine the scene of the failed drug sting where a policeman was kiled in Ban Ta Khun district of Surat Thani on Thursday night. (Photo by Supapong Chaolan)

The Surat Thani provincial court on Friday issued warrants for the arrest of Mr Surachate and Mr Wanchai for colluding in the murder of a police officer on duty, obstructing officers, possessing illicit drugs with intent to sell, illegal possession of firearms and carrying them in a public place.

The officer and his wife On-anong Buakaeo had two sons. Ronkarit is a first-year law student and Krittaporn is in Mathayom Suksa 5.

The RTPO is preparing to give another 2.5 million baht to the officer’s family, and to posthumously promote Pol Sen Sgt Maj Poonkrit to the rank of police major and recruit one of his children to the force.

A royally sponsored cremation ceremony for the officer will be held at Wat Srimaram in Phibun district.

Sopha Buakaeo, 75, the mother of the dead officer, said she was deeply saddened by the loss of her son. However, she said she was also proud that he died on duty. His father, a former police officer, also died on duty before Poonkrit and his twin brother were born, she said. 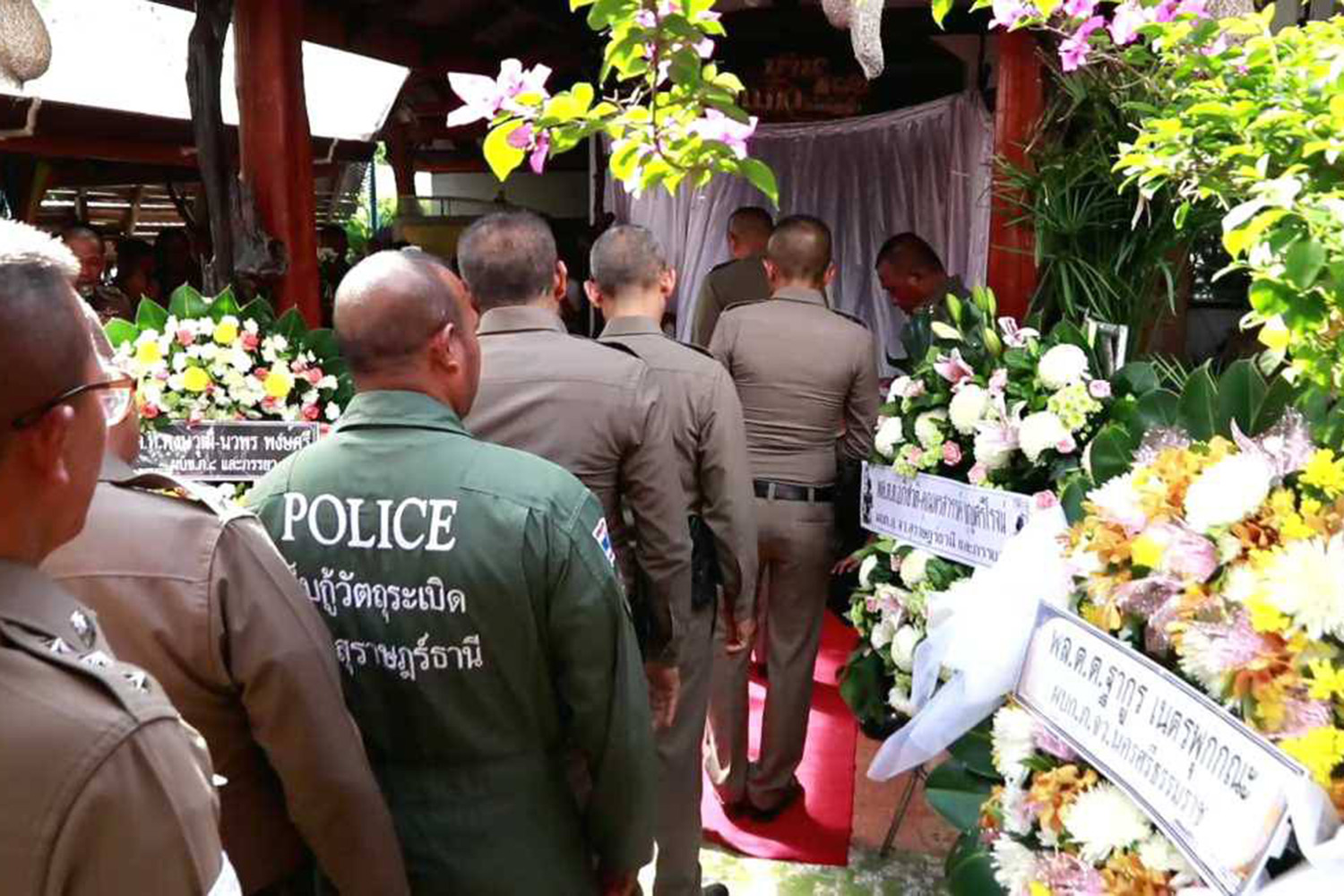 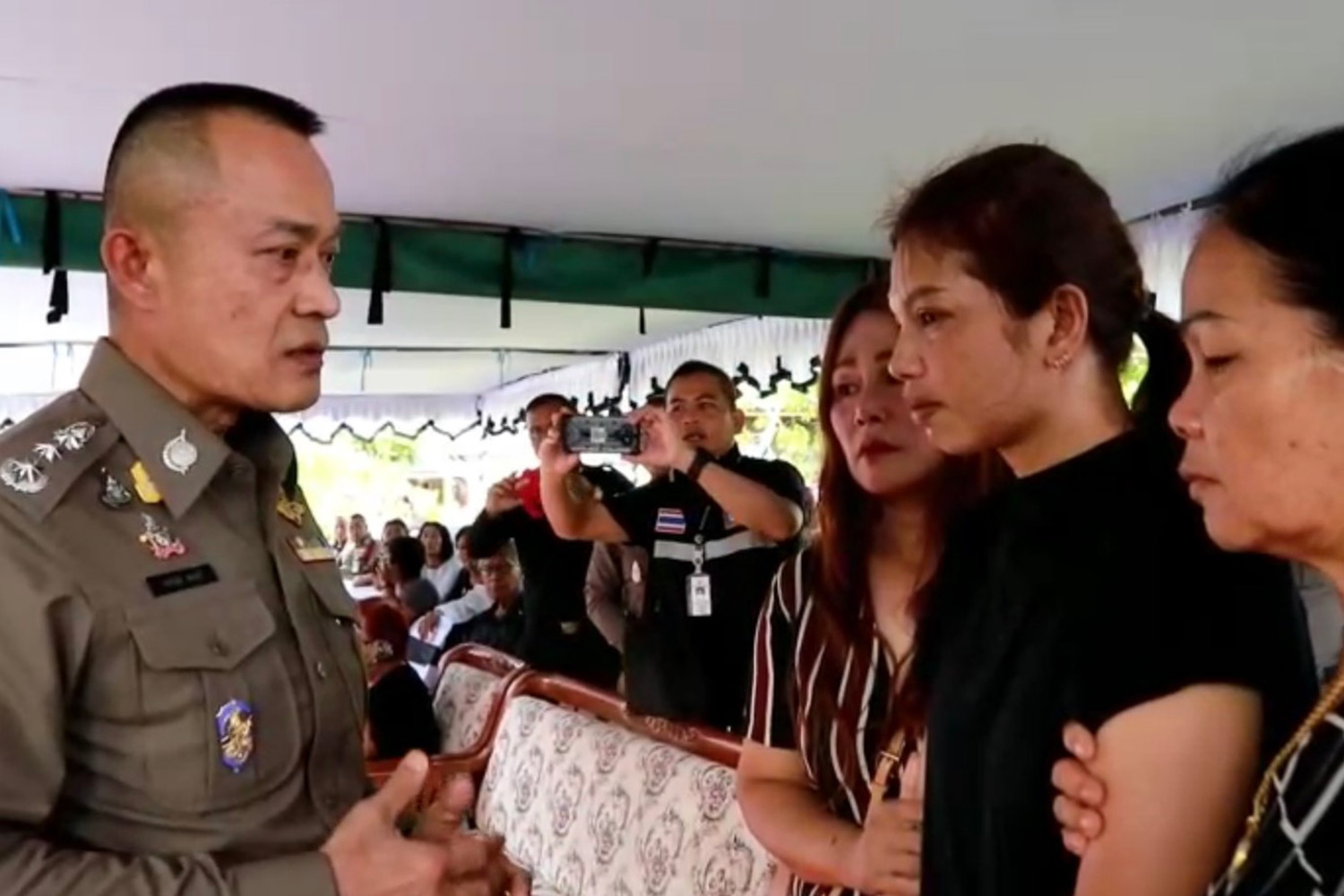 Pol Lt Gen Pongwut Pongsri, chief of Provincial Police Region 8, offers his condolences to the family of the officer who died on duty. (Photo by Nujaree Raekrun)

Dine-in restaurants will be allowed to remain open until 11pm and alcohol can be served in all provinces except Samut Sakhon.