St Joseph's Church in Ayutthaya marks the 350th anniversary of the arrival of the religion in the country, writes Nauvarat Suksamran

Devotees pay their respects at St Joseph's Church in Ayutthaya, the 'home' where the Catholic faith was first formed in the Kingdom. Visitors can also find books describing the faith missions of the pioneering missionaries in Thailand. (Photos by Phongthai Watthanawanijwuth)

Catholics across the nation have come together at St Joseph's Church in Ayutthaya to reflect on the arrival of Catholicism in Thailand 350 years ago. This church was the religion's first "home" in the kingdom and was subsequently used as a springboard to spread the faith further.

St Joseph's Church -- which marked the 350th anniversary on Thursday -- has kept the Catholic spirit alive until today. This can be seen especially during the festive season when religious rites are performed.

The celebration was also a time to reflect on the work done by early missionaries from various nations who united to work towards the single goal of expanding the religion while assimilating into local culture.

The church, which is built in Gothic-style architecture, has been renovated many times as it previously served as a burial ground for bishops and priests who served as pioneering missionaries. At least 30 missionaries are believed to have been buried at St Joseph's Church. 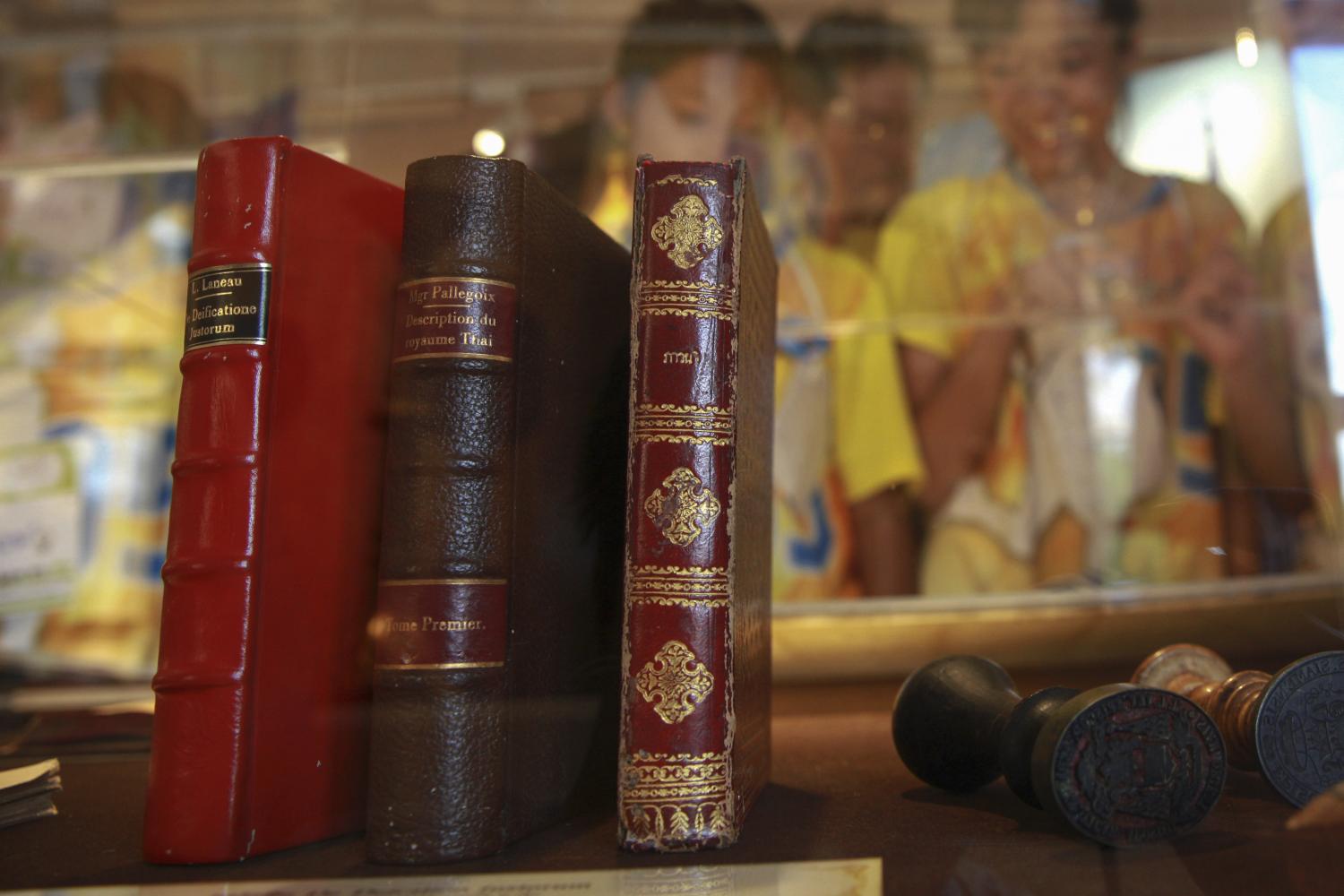 The bishops and missionaries documented the history of Catholicism in Thailand and their records -- which are kept at the Catholic Archives at Assumption Cathedral in Bang Rak district in Bangkok -- have been translated into Thai.

The impact of their work can be seen in the local language. For example, the word mis-sang stems from "mission" -- a reference to the Apostolic Vicars sent to propagate religion across the world.

The first Christian known to have set foot on Siamese soil was Afonso de Albuquerque, the Portuguese governor-general assigned to Asia. Portugal had been occupying Malacca, in modern-day Malaysia, and sent its diplomats to the Ayutthaya Kingdom during the reign of King Ramathibodi II to forge relations.

It is believed the first missionaries came to Siam for religious propagation and to take care of Christian Portuguese residing in Ayutthaya.

During this same time, the Paris Foreign Mission Group (MEP) led by Bishop Lambert de la Motte, also made their way to the kingdom. By then, the number of Portuguese missionaries in Ayutthaya had increased to 10, along with one Spanish priest in addition to the 2,000 local people who had already converted.

Later, the first Synod Assembly of missionary groups was established to settle problems affecting the Christian community, including conflicts among the missionaries, some of whom had dominated the role of Apostolic Vicar. Other Christians also came to Siam to engage in commerce with Asia but some were given specific assignments from the Vatican.

The Synod Assembly issued directives such as a mandate to establish a local priests' council to encourage people to enter the priesthood.

Anyone who violated the rules would be banished from their mission to preserve the sanctity of God.

Some of the directives issued were a total ban on engagement in politics and commerce, a requirement to assimilate and not criticise the actions and practices of local people, and avoiding arguments and holding their tongue on sensitive issues. 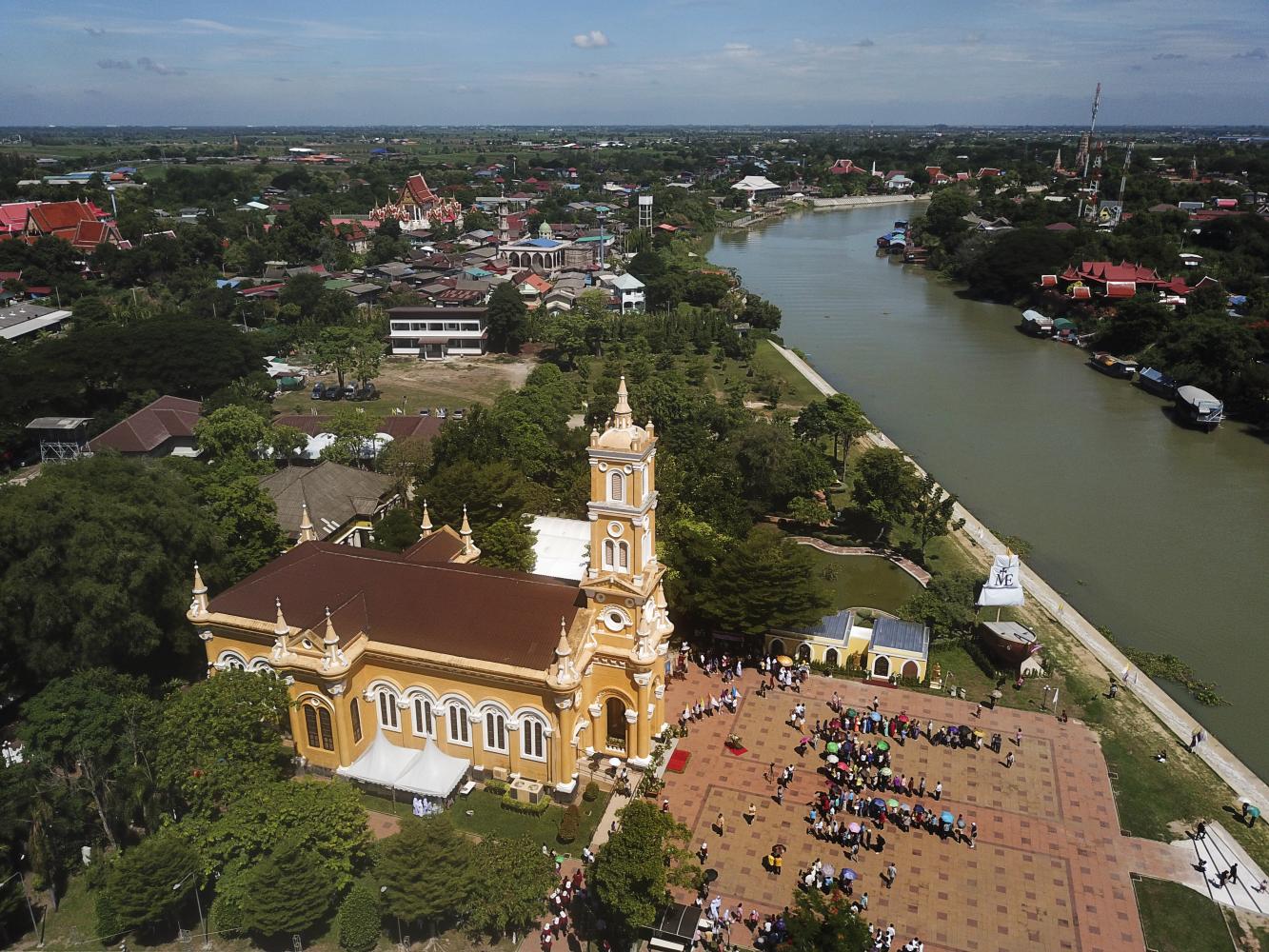 An aerial view is seen of St Joseph's Church.

Moreover, missionaries were also instructed to teach people to uphold self-value and they had to work to translate books about Christianity into local languages.

According to the assembly, missionaries were also to provide free education to locals where they were would actively spread the message of God.

They were also instructed to teach Latin and the Christian doctrine to the Catholic faithful.

Fast forward to Thursday and the St Joseph's Church in Ayutthaya was teeming with the descendants of followers of the pioneering priests and bishops.

Speaking at the celebration service, Father Nicholas le Beau, head of MEP, mentioned the work of the late bishops, including Louis Laneau who was appointed the first bishop of the Siam Mission.

The French bishop had travelled to Siam following his appointment by Pope Clement IX. He worked to help the community through several projects such as running a nursing home.

He was later freed from prison thanks to King Narai the Great's intervention in 1691 and Bishop Laneau would spend the remainder of his life in Ayutthaya until his death on March 16, 1696.

"He had written several notes ranging from how to provide moral support for prisoners and how to take care of patients with leprosy.

"His devotion had impressed the king so much that he granted the bishop early release from prison," said Father Nicholas.

Father Nicholas said Bishop Laneau was well-versed in both Pali and Thai and that he had studied Buddhism for three years, which allowed him to understand Siamese traditions and culture.

Bishop Laneau often wrote about the Catholic community in order to explain Catholic rituals, practices, and principles. He also made visits to local communities and attended to the sick.

Father Nicholas added that being a trailblazer was not easy.

"We needed to plough the land first, even though the rice-sowing season had not come, we needed to stay calm and wait for the ground to settle. 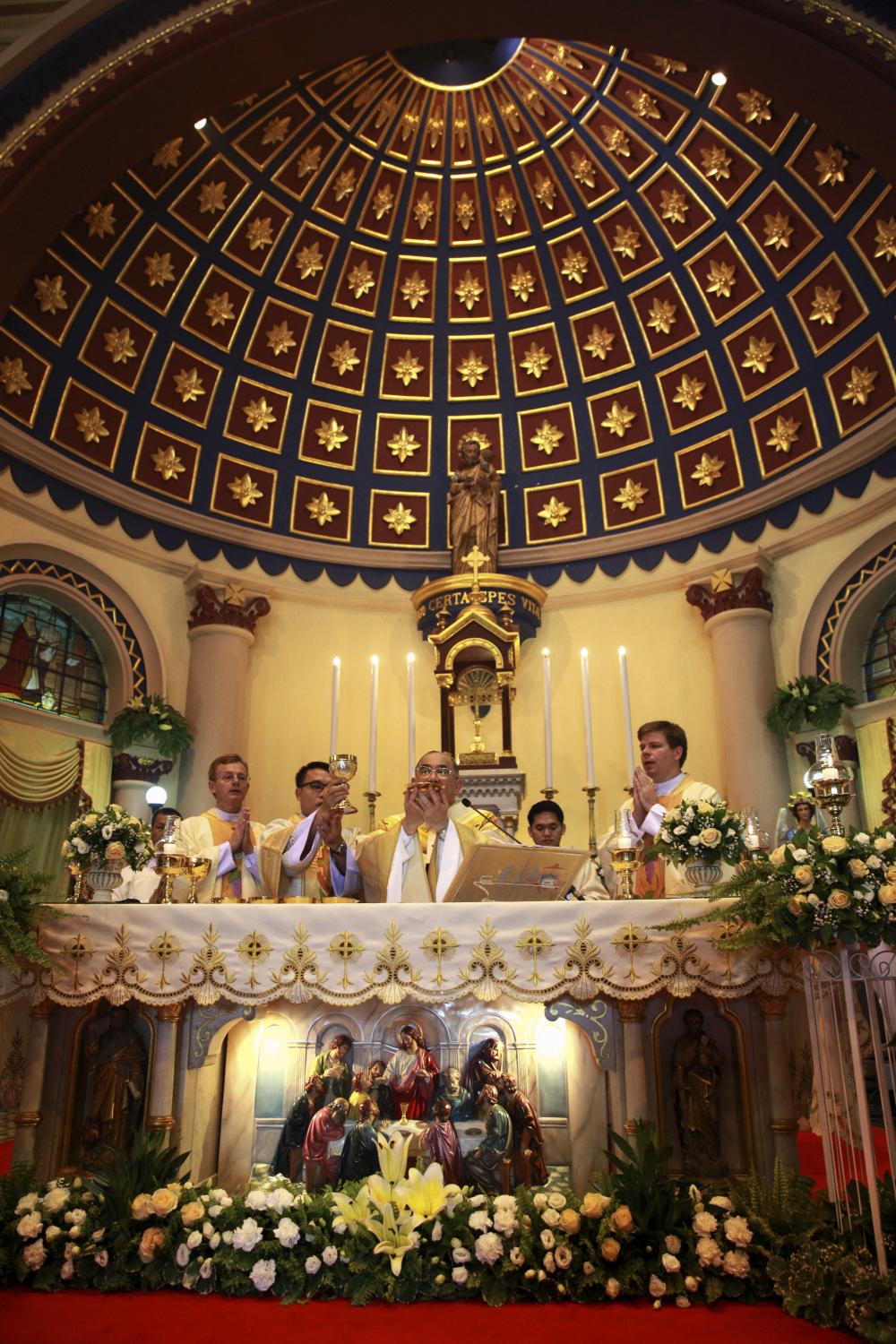 Senior clergymen celebrate Mass during the marking of the 350th anniversary of the arrival of Catholicism in Thailand. photos by Phongthai Watthanawanijwuth

He pointed out that the location and environment of the Ayutthaya Kingdom allowed for religious propagation because Thai people are peaceful and not warmongers.

Moreover, seminaries, or schools that prepare students to be priests, became commonplace in the country during the reign of King Narai and attracted men from Siam, China, Vietnam and other Asian countries wanting to be ordained as clergymen. Later, the place was officially named "the International Seminary".

Father Thirapol Kobvithayakul, a representative of St Joseph's Seminary, said that more priests are needed for the survival of the religion. He noted this was not a priority for Portuguese missionaries in the old days.

Father Thirapol said there are fewer ordinations now due to changes in society as it takes time and a lot of money to train a priest.

As a result, delegates from the MEP have been left to take on the task but they realise it would be hard to spread the Catholic faith without the help of local priests.

"I have to extend my gratitude to Bishop Laneau and Bishop Lambert de la Motte, who laid the foundation for Christianity (in Thailand) and saw to the induction of local priests who followed in the footsteps of God," Father Thirapol said.

Representing the nuns at the Catholic celebration was Sister Sriprai Krathong from the Lovers of the Cross, a nuns' group dating back to the Ayutthaya period.

She said 350 years of missionary work in Siam were instrumental in setting up the order of nuns which compromises more than 8,000 members from Laos, Cambodia and Vietnam, and other nations.

According to Sister Sriprai, the federation of nuns is working to build the Christianity Propagation Home at St Joseph's Church in Ayutthaya. They want to make it a centre for studying Christianity and a home for historical records with the help of religious historians to compile information for the next generation of Christians.

The group also plans to open the so-called "Christianity Propagation Fields" for Christians of different ethnic origins, many of whom live far away from cities.

Putthapong Puttarnsri, a religious scholar, said much work is still left to translate information about Christian settlements in Siam.

More data compilation and translation is needed as there are about 10,000 handwritten records made by the missionaries, with the oldest dating back to the days of King Narai. These records are a valuable source of knowledge as they were written in both French and Latin.

More than 400,000 rai of farmland and residential areas in 8 northeastern provinces along the Chi and Mun river basins are flooded, satellite data shows.