Turan Eveenil, 33, a Russian national, and his wife Khairullina Kamilya, 27, of Kazakhstan, are held for filing false statements about their passports. (Photo by @1155TPB Tourist Police Bureau Facebook page)

SAMUT PRAKAN: A Russian man and his Kazakhstani wife have been arrested at Suvarnabhumi airport for filing false reports that they forgot their passports so they could avoid being caught for overstaying.

Turan Eveenil, 33, a Russian national, and his wife Khairullina Kamilya, 27, of Kazakhstan, were caught on charges of filing false statements and overstaying their visas, said Pol Maj Gen Vorapong Thongpaiboon, chief of the Tourist Police Bureau (TPB)’s division 1, during a media briefing on Thursday.

The charges were brought against them after the couple went to the TPB’s airport office at around 10.30pm on Tuesday and told police that they wanted to board a flight to Phuket but airline staff did not allow them to because they forgot to bring their passports.

The couple said they wanted to file the statements with police so they could use them as identification to board the plane.

Tourist police then took them to Suvarnabhumi airport police station to file the reports but they noticed that the pair acted suspiciously. After the couple filed the reports, the officers took them back to the TPB’s airport office and coordinated with immigration officers and airport police to jointly question them, said Pol Maj Gen Vorapong.

After the questioning, police found that the couple had their passports in their bag. They showed Mr Turan and Ms Khairullina had overstayed their visas for more than seven months.

A police investigation also found that the couple had filed similar reports with police in other places in Thailand. They then used the statements and their driving licences as identification when travelling in the country to avoid being caught for overstaying. Their actions posted a security threat, said Pol Maj Gen Vorapong.

The couple were charged and blacklisted for five years and handed over to police at Suvarnabhumi police station for legal action. 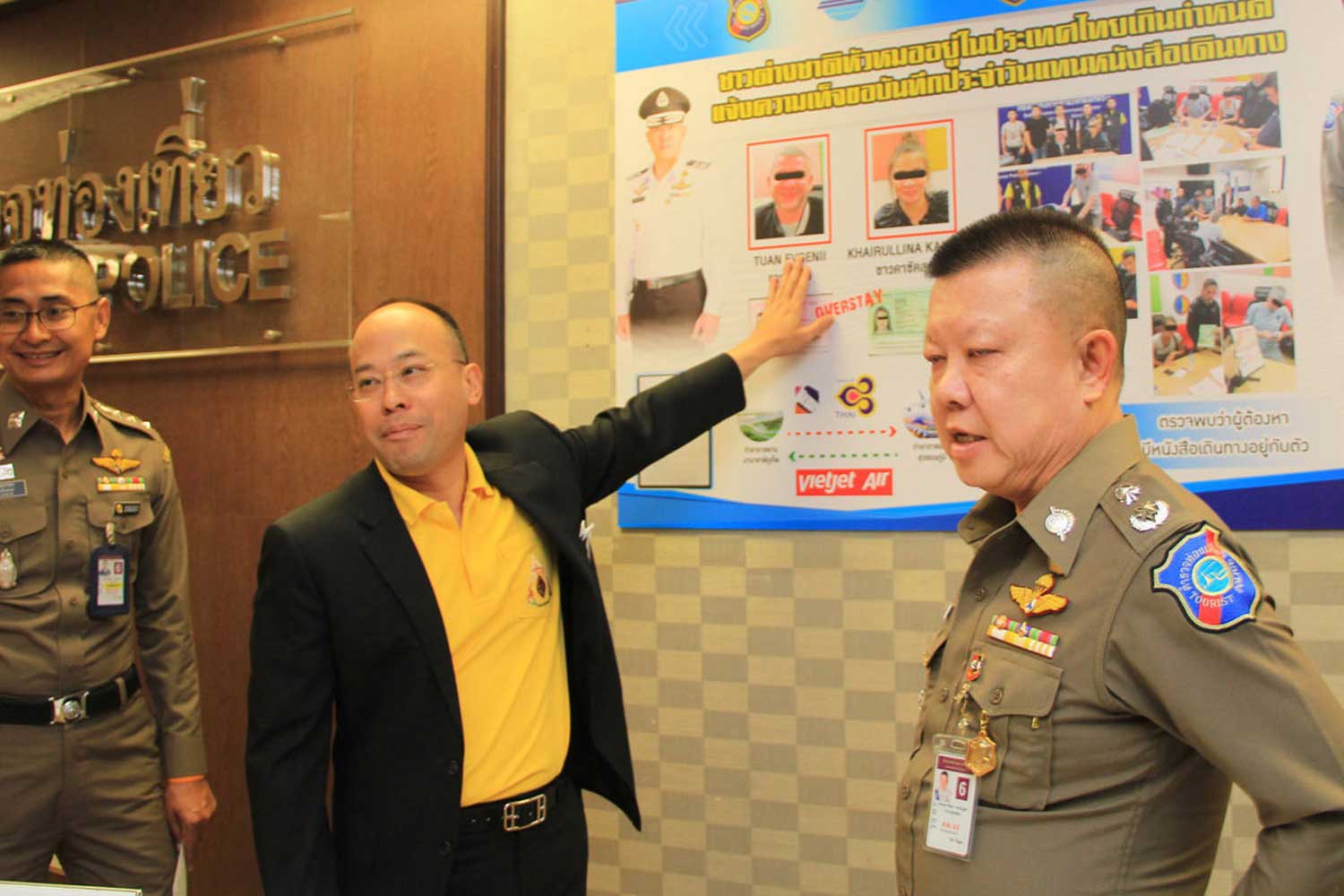 Police hold a media briefing about the arrest of a Russian man and his Kazakhstani wife for filing false statements and overstaying their visas. (Photo by Sutthiwit Chayutworakan)