Demining push off with a bang
Thailand
General

Demining push off with a bang

An officer shows different types of landmines during a press conference about the Defence Ministry's operation to destroy 3,133 landmines in Phakdi-Phandin village in Sa Kaeo. (Photo by Wichan Charoenkiatpakul)

The Ministry of Defence is destroying a total of 3,133 landmines in a bid to get Thailand off the Ottawa Convention's blacklist.

On Tuesday, the Defence Ministry began the push with an event dubbed "Thailand's Anti-Personnel Mines Stockpile Destruction 2019", at Observation Hill 152, in Watthana Nakhon district, in the eastern border province of Sa Kaeo. The area has among the heaviest density of landmines in the country.

The event was chaired by General Chaichana Nakkerd, chief of joint staff, with foreign defence attaches, NGOs and various government representatives attending to witness the destruction of the stockpiled mines.

General Chaichana expressed gratitude to Japan, Norway, the US and various international organisations for supporting Thailand in the cause.

A total of 3,133 anti-personnel mines will be destroyed between Aug 6-10, with only a few dozen kept at a controlled site as educational tools. 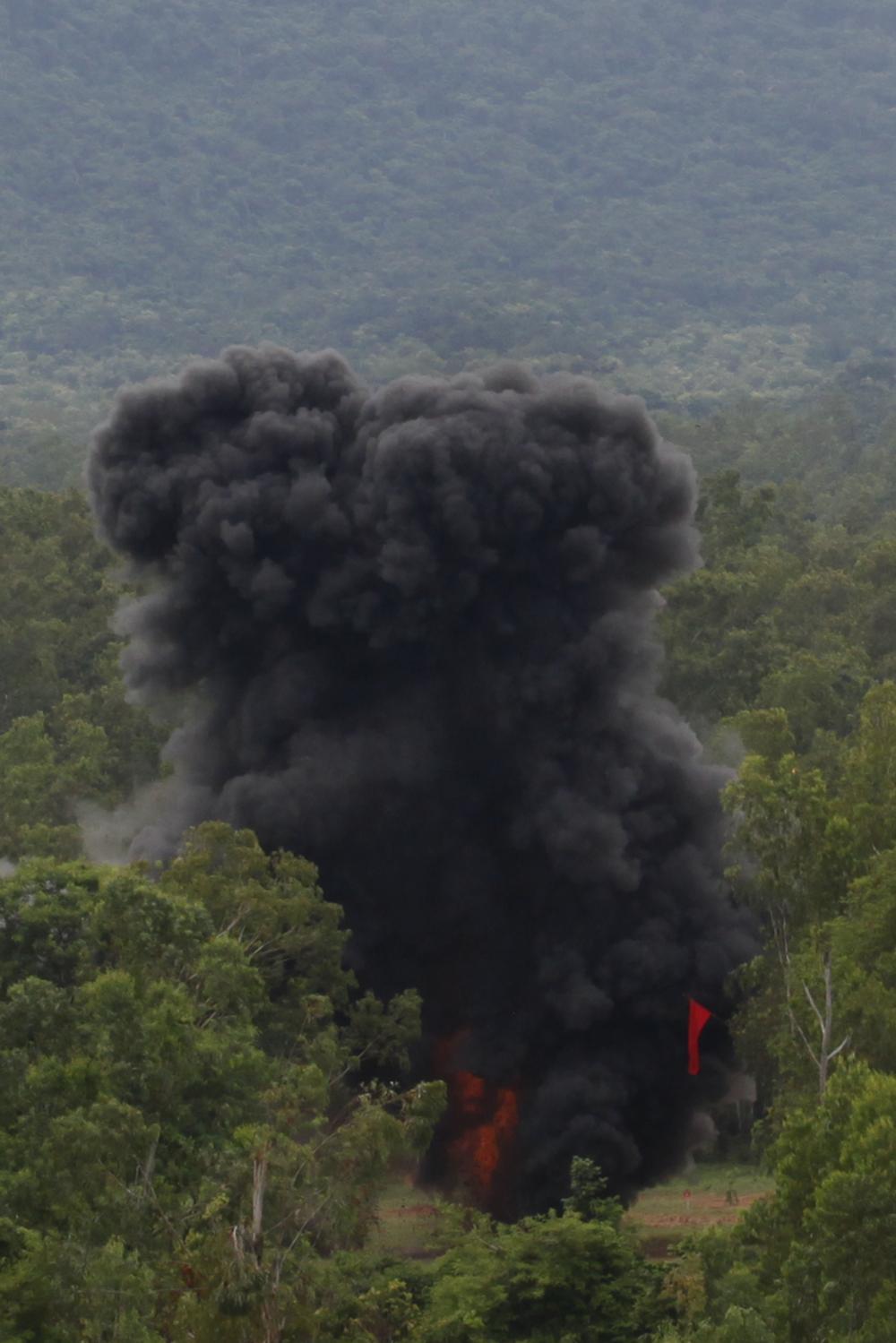 Thick smoke rises during an operation to destroy an anti-personnel landmine stockpile in Sa Kaeo's Watthana Nakhon district. The government is getting rid of 3,133 landmines in a bid to have Thailand removed from the Ottawa Convention's blacklist.

The clearance is part of efforts to rid the whole country of anti-personnel mines. It also displays Thailand's commitment as a 1997 signatory to the Ottawa Convention, as well as raising awareness of dangers from numerous mines along the border, according to the Ministry of Defence.

United Nations guidelines state that any country with more than 1,000 mines in its possession will be blacklisted.

Thailand was the first country in Southeast Asia to ratify the Ottawa Convention. Most landmines in Thailand were planted along Thai-Cambodian border during the 1970s.

After signing the Ottawa Convention, the government established the Thailand Mine Action Centre (TMAC) to oversee the clearance.

According to a 2016 TMAC study, landmines are planted on over 420 square kilometres of Thai territory, mostly on the Thai-Cambodian border.