Former Phra Julien offers a wai for people to forgive him after he left the monkhood on Saturday. (Photo from @phrajuliensfoundation Facebook account)

A Canadian monk popular among locals in Mae Hong Son for helping the needy has resigned from the monkhood following accusations of having sexual relationships with at least one woman.

Phra Julien, 42, posted a Facebook message on Sunday saying he had decided to leave the monkhood to seek forgiveness after violating the Dhamma principles by having sexual relations with women.

The former monk gave no details on the case. He posted a picture of himself wearing a white shirt after returning to layman's status as Julien Desilets alongside a monk believed to be Phra Khru Sujitpanyarat, who disrobed him. Other reports said he left the monkhood in a ceremony at Wat Ban Pae in Chomthong district in Chiang Mai province on Saturday.

His decision came one day after he posted photos showing the donation of fruit trees to villagers, probably in Sop Moei district of Mae Hong Son. Mr Desilets lived at Hua Putha Monastery in Sop Moei when he was a monk.

The Canadian was well known for his dedication to helping people in the district and other areas. The sexual allegations that were raised recently came as a shock for his disciples. 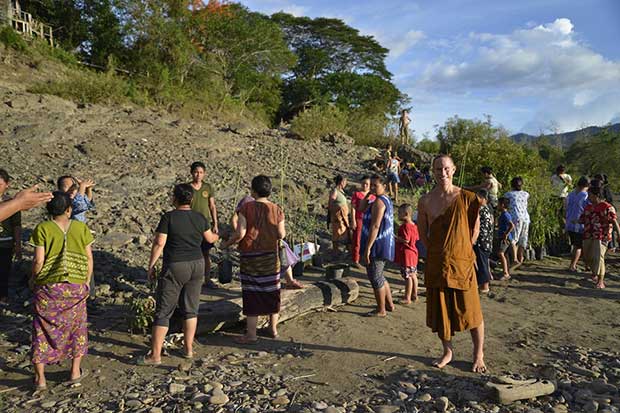 Julien Desilets poses for a photo dated Aug 9, 2019, during a donation of fruit trees to villagers. (Photo from @phrajuliensfoundation Facebook account)

Veterinarian Somchai Sirithepsongklod on Friday claimed on his Facebook page that Phra Julien had behaved improperly by having sex with a female foreigner in Chanthaburi province and another woman on a separate occasion.

Mr Somchai said he had known Phra Julien since volunteering with him to build houses for the poor in the northern region about three or four years ago.

"I am willing to atone for my wrongdoing and please forgive me," wrote the former monk, who promised to wear white and continue his Dhamma practice after leaving the monkhood.

He reportedly will study Dhamma at a temple in Roi Et province before returning to the monastery in Sop Moei.

"I will continue to devote myself to helping the poor in remote areas," he said.

Phra Julien was the subject of an hour-long documentary in 2017 on the BBC Earth series ‘Where the Wild Men Are’. It focuses on people who leave the modern world behind to live simpler lives in remote places. He has also been featured in several videos posted to social media.