KHON KAEN: Several provinces in upper Thailand have been hard hit by heavy rain brought by tropical storm Podul since Friday night, with Khon Kaen among the hardest hit.

Floodwater was reported to be as high as three metres in some parts of the northeastern province. Several areas were submerged, especially Non Sawang and Non Sa-ard communities in tambon Nai Muang of Ban Pai district.

People thronged local roads, waiting for help from authorities after their houses were submerged overnight. Some families were stranded and were waiting on their roofs. Currents were strong and all types of vehicles were submerged.

Suparb Maungsri, 57, of Non Sa-ard, said the floodwater had kept rising since 8pm Friday. As of 10am Saturday, they had received no help.

“My family members and our neighbours have to stay on roofs. We urgent need help," he said. "Boats should be brought to take community people to stay Wat Chanprasit in Ban Pai municipality.

“The hardest hit area are people living in the municipality, as well as Non Swang and Non Sa-ard, totalling 1,000 households.

“This year, the flooded area has expanded, making the deluge the biggest in 40 years."

Ban Pai police later helped people move their belongings from their houses in the municipality and evacuated some of them to dry areas.

In adjacent Kalasin province, heavy downpours caused the Huay Sithon reservoir to overflow, inundating 10 communities in downtown Muang district. About 450 households were affected. The water levels were in a range between 80cm and 1m.

Kalasin governor Kraisorn Kongchalard on Saturday held a meeting with chiefs of all 18 districts and concerned agencies to survey the damage caused by the tropical storm and provide assistance to people.

Mr Kaisorn said most of the affected areas were farmland, houses, bridges and roads. Luckily, the Lampao dam could still hold more water. The dam is now holding 719 million cubic metres of water, or about 41% of its capacity, added the governor.

Jaruwat Boonperm, mayor of Muang municipality, said the water level in municipal areas were about 80cm to one metre high. The municipality has prepared boats to help affected residents evacuate their belongings to dry areas.

The situation was aggravated by run-off, which converged in Lam Nam Yung in tambon Wang Luang, Selephum district.

In Muang district, floodwater was 60-90cm high. Soldiers were sent to help people move their belongings.

A section of a road also collapsed due to torrential currents in Selaphum district and heavy machinery was sent by a military rescue team to alleviate the situation. 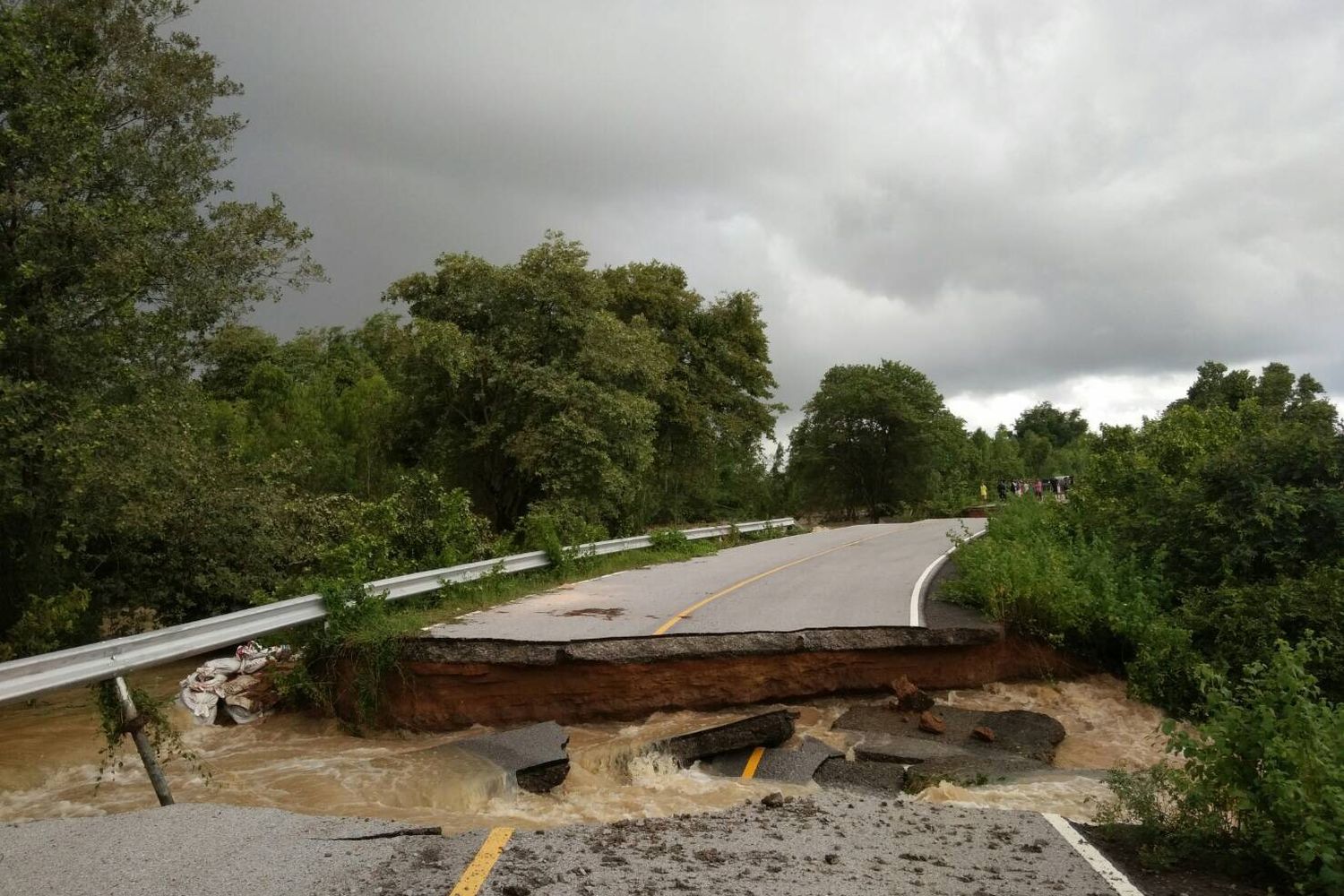 A section of a road in Selaphum district, Roi Et province, collapses on Saturday. (Photo supplued by Wassana Nanuam)

In Phetchabun, heavy downpours caused flooding in 15 villages in Khao Kho district. Soldiers and rescue workers were despatched on Saturday to evacuate residents from more than 10 households in tambon Nong Mae Na as water was more than 1m deep.

Highway No.2325 between Khao Kho and Nong Mae Ha was heavily inundated. The road became impassable to all vehicles. In Wang Pong district of this northern province, flooding has also hit four bee farms with many boxes of bees swept away by strong currents.

Mrs Somnuek Kaewkaemthong, 48, owner of the Somjai bee farm, said flash floods hit her farm and her son-in-law's on Saturday morning. They could not move boxes where bees were raised to high areas in time. About 30 boxes of bees from her farm were swept away by strong currents, causing at least 60,000 baht in damage, she said. 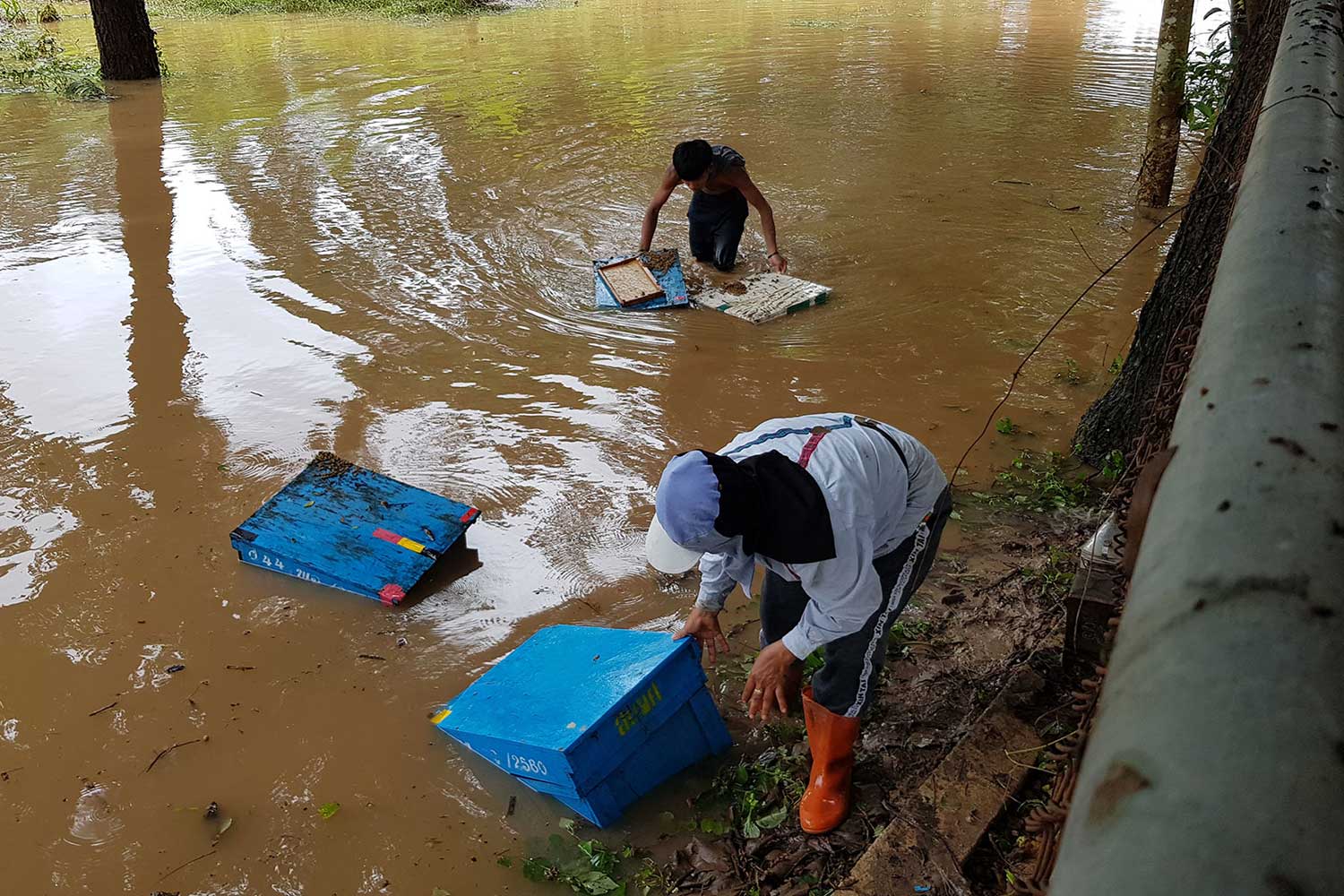 Bees raised in boxes are swept away by strong current in Wang Pong district, Phetchabun. (Photo by Sunthorn Kongwarakom)

In Phrae, hours of heavy downpours triggered runoff that hit many areas in Rong Kwang, Song and Long districts.  Schools, roads, farmland and houses were flooded.

In Phichit, runoff and flooding ravaged three districts, with vast areas of paddy fields and many houses flooded.

The provincial agricultural office reported that more than 10,000 rai of paddy fields in the three districts were inundated. Several thousands of houses were also flooded. Local leaders were surveying damage in their areas.

Many households were cut off from the outside world as roads were impassable to all vehicles. Flat-bottomed boats were sent to evacuate several sick elderly residents .

Pradit Atipattrakul, director of Phichit highway office, said Highway No.11 between kilometre makers 131 and 140 was about 40cm under water. Signs were set up to ban small vehicles using this route.

In Nan, the provincial disaster prevention and mitigation office on Saturday ordered the evacuation of 14 households after landslides hit two houses in Na Noi district. Nobody was hurt.

Twenty-seven provinces in the North, Central Plains, East and South are being warned of heavy rain that may trigger possible flash floods until Sunday.

The department said in its 17th announcement issued on Saturday that Padul, downgraded from a tropical depression to a low-pressure cell, has covered lower North.

Thundershowers are expected much of the whole country and isolated torrential rain is also possible. It told people to brace for the severe conditions that may cause flash floods.

The department said heavy to very heavy rains are expected in 27 provinces until Sunday.

The weather agency said waves of 2-4 metres high are expected in the Andaman Sea and in the upper Gulf of Thailand and more than four metres high in thundershower areas. All ships should proceed with caution. Small boats have been advised to remain ashore during the period. 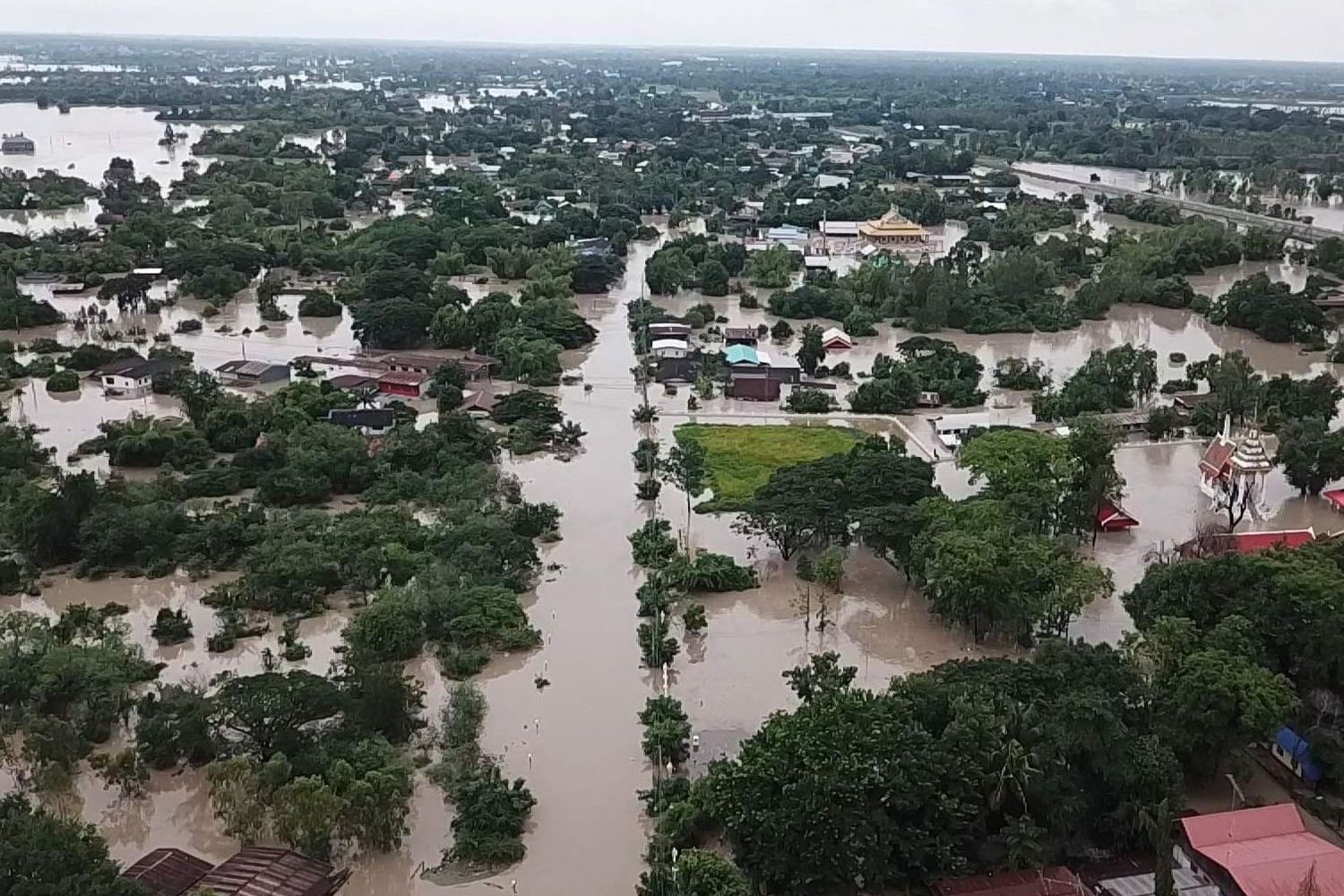 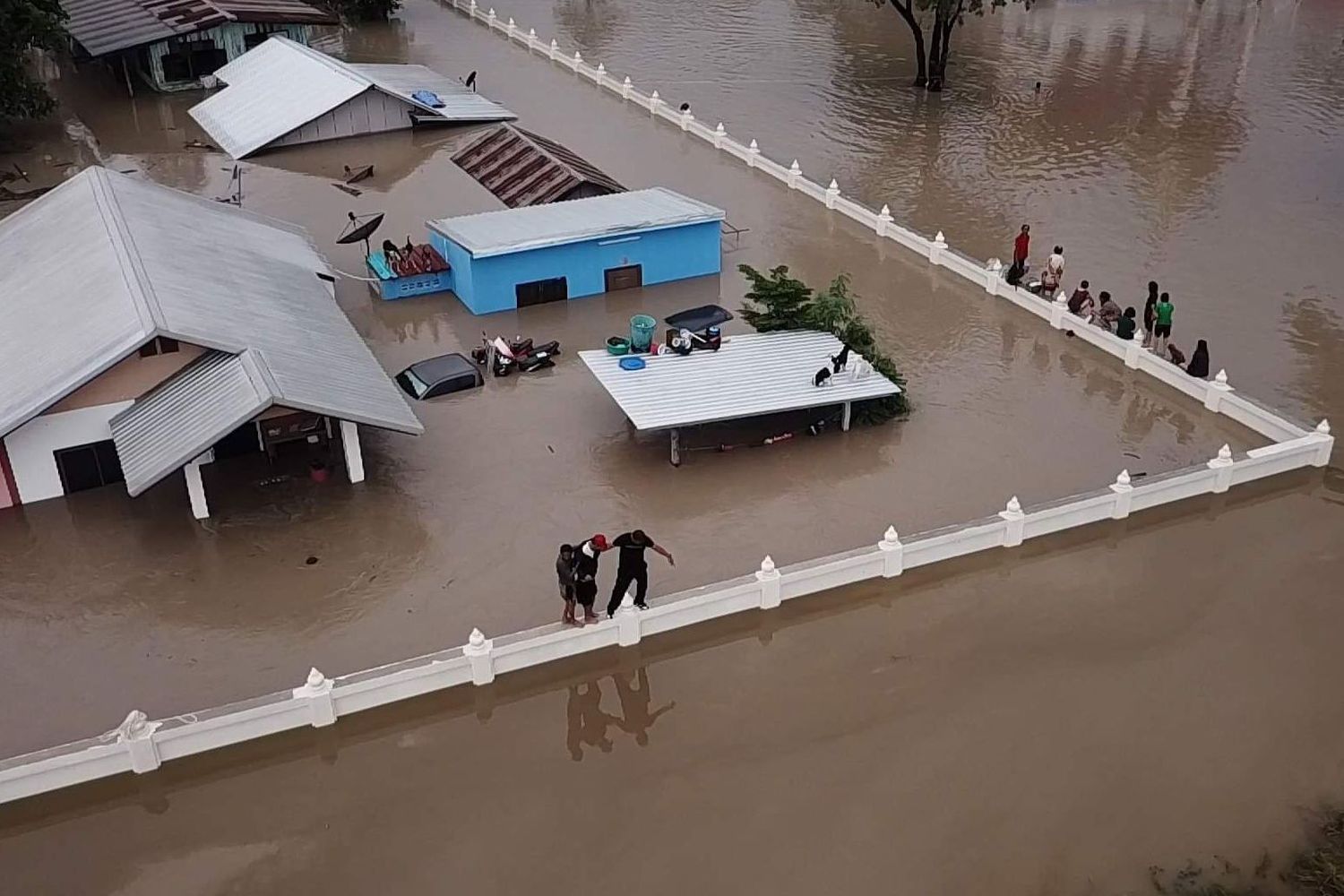 An official helps a man walk on a fence to reach a boat in Non Sa-ard community in Ban Pai district, Khon Kaen province, on Saturday morning. (Photo by Chakrapan Nathanri) 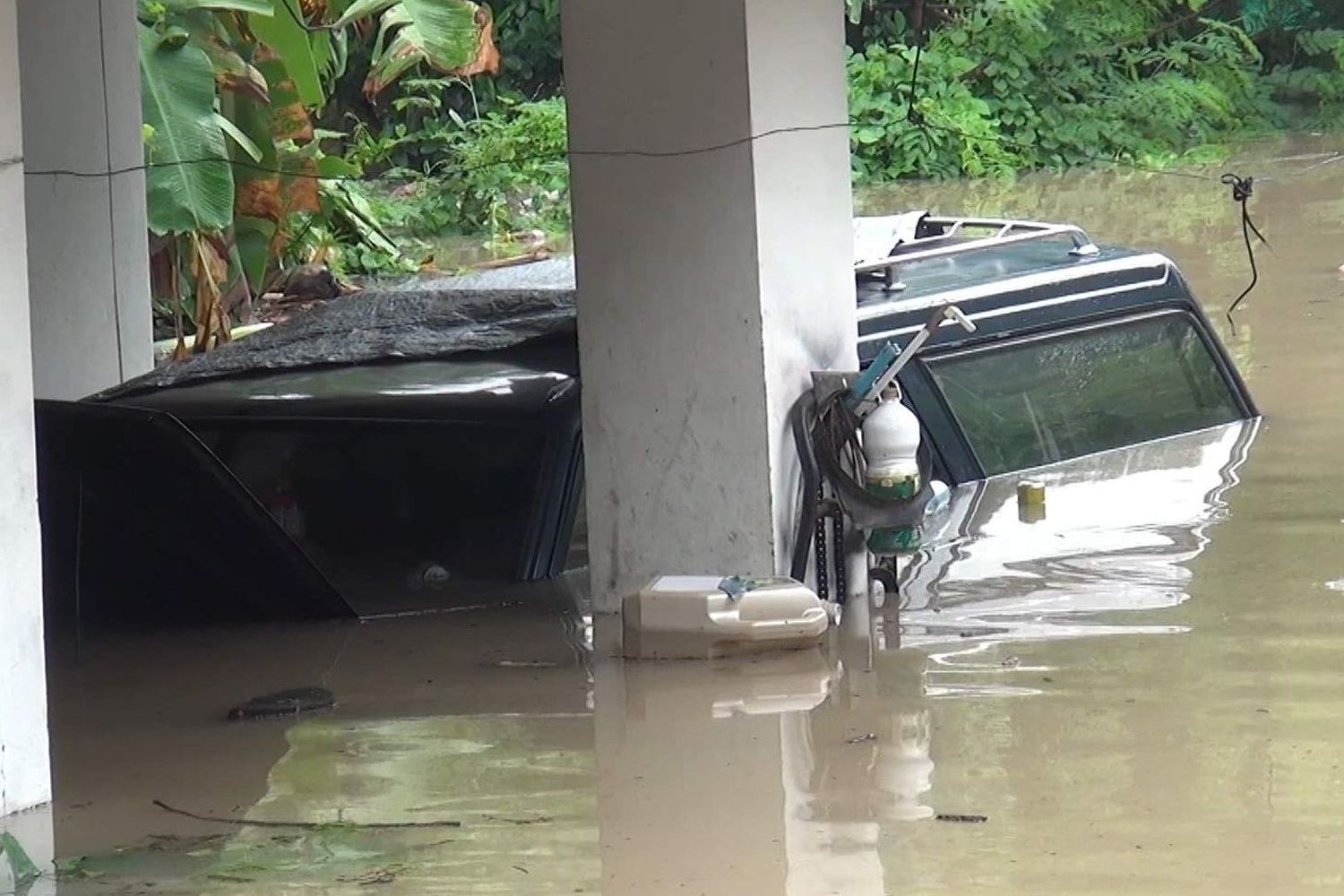