The results of the Central Institute of Forensic Science's analysis of bones found in an oil barrel are shown to the media. photos by Pornprom Satrabhaya

The Department of Special Investigation (DSI) is identifying suspects after concluding that missing Karen rights activist Porlajee "Billy" Rakchongcharoen was murdered, following the discovery of a burnt piece of his skull in the reservoir of Kaeng Krachan dam in Phetchaburi province.

DSI chiefs on Tuesday announced their investigation findings about the disappearance of Porlajee, 30, in April 2014. He had earlier led a fight against the eviction of Karen people from Kaeng Krachan National Park and helped relatives sue officials for the destruction of their homes there.

The department's deputy director-general, Korrawat Panprapakorn, said DSI detectives and officials from other organisations had joined the investigation to find evidence related to the disappearance.

On April 26 and May 22-24, a sonar-equipped underwater drone of King Mongkut's University of Technology North Bangkok was used together with divers from the Border Patrol Police to comb specific locations at the bottom of the reservoir under a rope bridge.

They found an oil barrel, its lid, two steel rods, a burnt piece of wood, and two bone fragments. The Justice Ministry's Central Institute of Forensic Science found that one of the fragment's was a piece of a human skull. It was found to be burned, cracked and shrunk due to exposure to extremely high temperatures of 200-300 degrees Celsius.

The thumb-sized bone piece -- the petrous part of the temporal bone -- found at the bottom of the barrel was a crucial piece of evidence, as it allowed investigators to identify the deceased person. 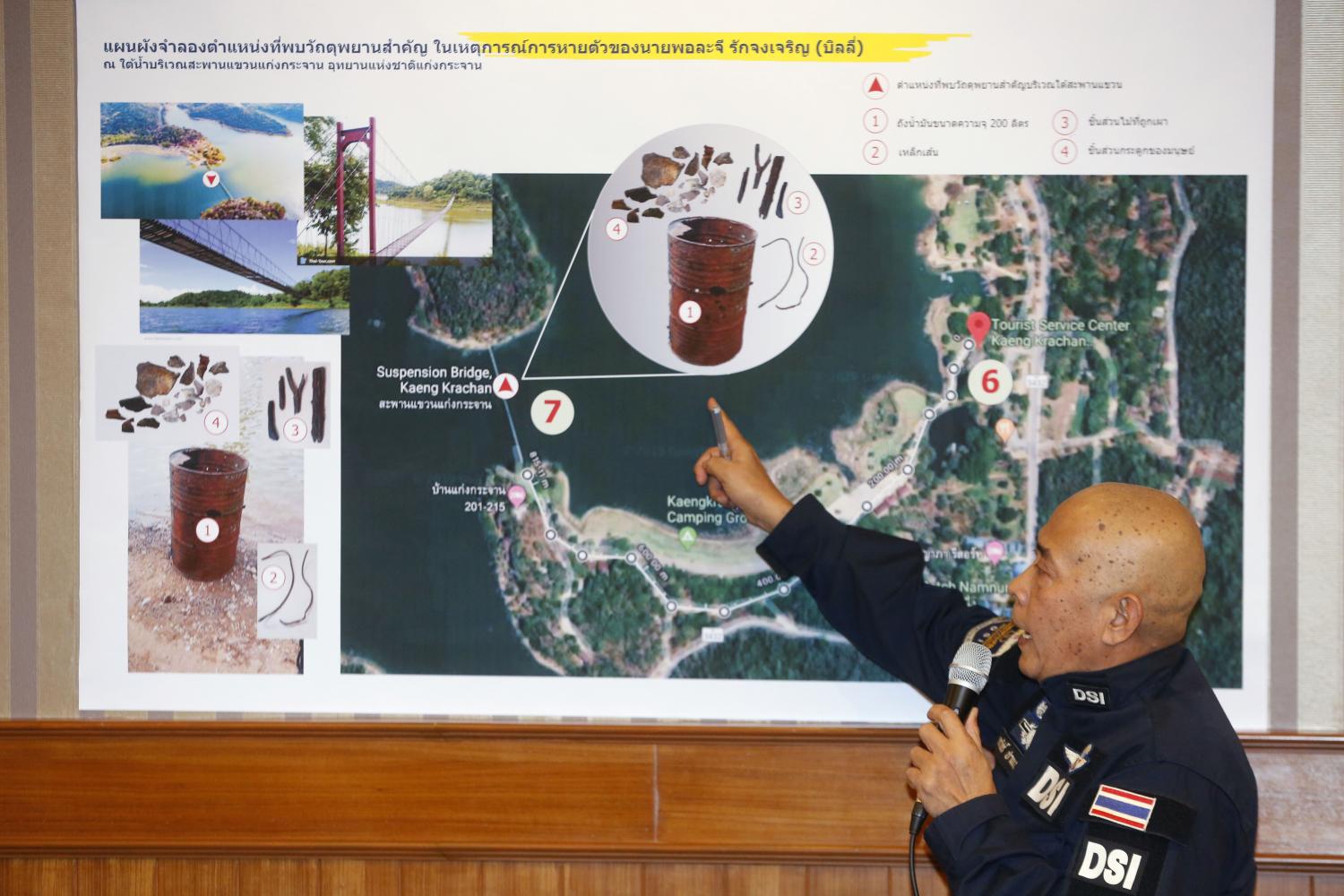 As the genetic traces of the bone matched that of Porlajee's mother, the DSI concluded that it belonged to Porlajee, Pol Lt Col Korrawat said.

"Even though the DSI has concluded that Billy was killed, it did not know how he was killed. The DSI was convinced that the body was burned to conceal the crime," he said.

Divers re-examined the scene on Aug 28-30 and found 20 more bone fragments, eight of which were identified as human. The DSI concluded that the crime was a torture murder, Pol Lt Gen Korrawat said, adding that investigators have some clues about the identity of the suspects.

Porlajee was last seen on April 17, 2014 in the custody of state officials. At the time of his arrest, he was helping his relatives, a group of ethnic Karen, to sue Chaiwat Limlikit-aksorn, the former chief of Kaeng Krachan National Park, for setting fire to their bamboo huts and rice barns during a series of forest evictions.

Mr Chaiwat later claimed Porlajee was arrested for collecting wild honey, but was released after a warning.

Mr Chaiwat and his team faced a murder charge related to Porlajee's disappearance but were eventually acquitted due to a lack of evidence.

On June 28 of last year, the DSI accepted the case for a special probe. However, since some state officials were implicated in the case, the DSI had to send its investigation report to the National Anti-Corruption Commission (NACC) for another probe.

In December last year after finishing its inquiry, the NACC returned the case to the DSI, according to DSI director-general Paisit Wongmuang. 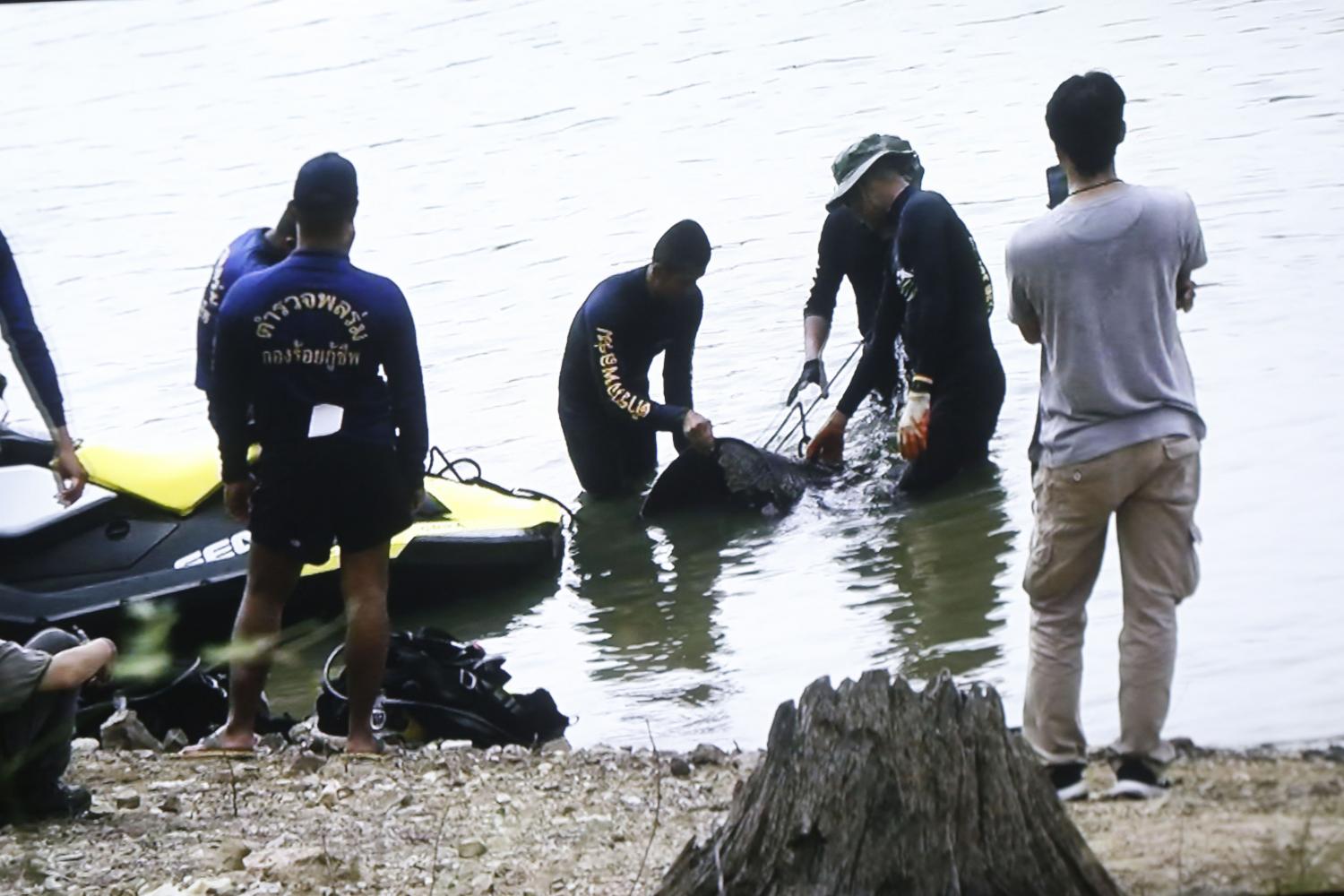 Scuba divers retrieve an oil barrel from Kaeng Krachan dam. One of two bones inside the barrel was found to be a piece of a human skull.

The investigation covers two issues: The first involves Kaeng Krachan National Park officials who are facing a charge of dereliction of duty in failing to hand Porlajee over to police for a probe in connection with the charge of collecting of wild honey. The second involves the disappearance of Porlajee, according to Pol Col Paisit.

The DSI chief also said that Porlajee's wife and mother have now been placed under the witness protection programme and that the case has been changed from a missing persons case to an investigation into a murder and the hiding of a corpse.

Speaking to the media after the DSI briefing, Pinnapa Pruksapan, Porlajee's wife, said "I felt like I had a lump in my throat when I saw the photos of Billy's bones. Why take his life? He never harmed anyone."

She said deep down she had known her husband's fate because he had been missing for so long. Ms Pinnapa said that she, her five children and Porlajee's mother have feared for their safety because after her husband went missing, several people threatened to make them "disappear" too.

"Our family does not want compensation from those who did that to Billy. But we want the Department of National Parks [Wildlife and Plant Conservation] to allow villagers to return and live in the areas that they were forced from," Ms Pinnapa said.

Thanya Netithammakul, director-general of the Department of National Parks, Wildlife and Plant Conservation, said the department, as the supervising entity of Kaeng Krachan National Park, is ready to work closely with the DSI in the investigation. 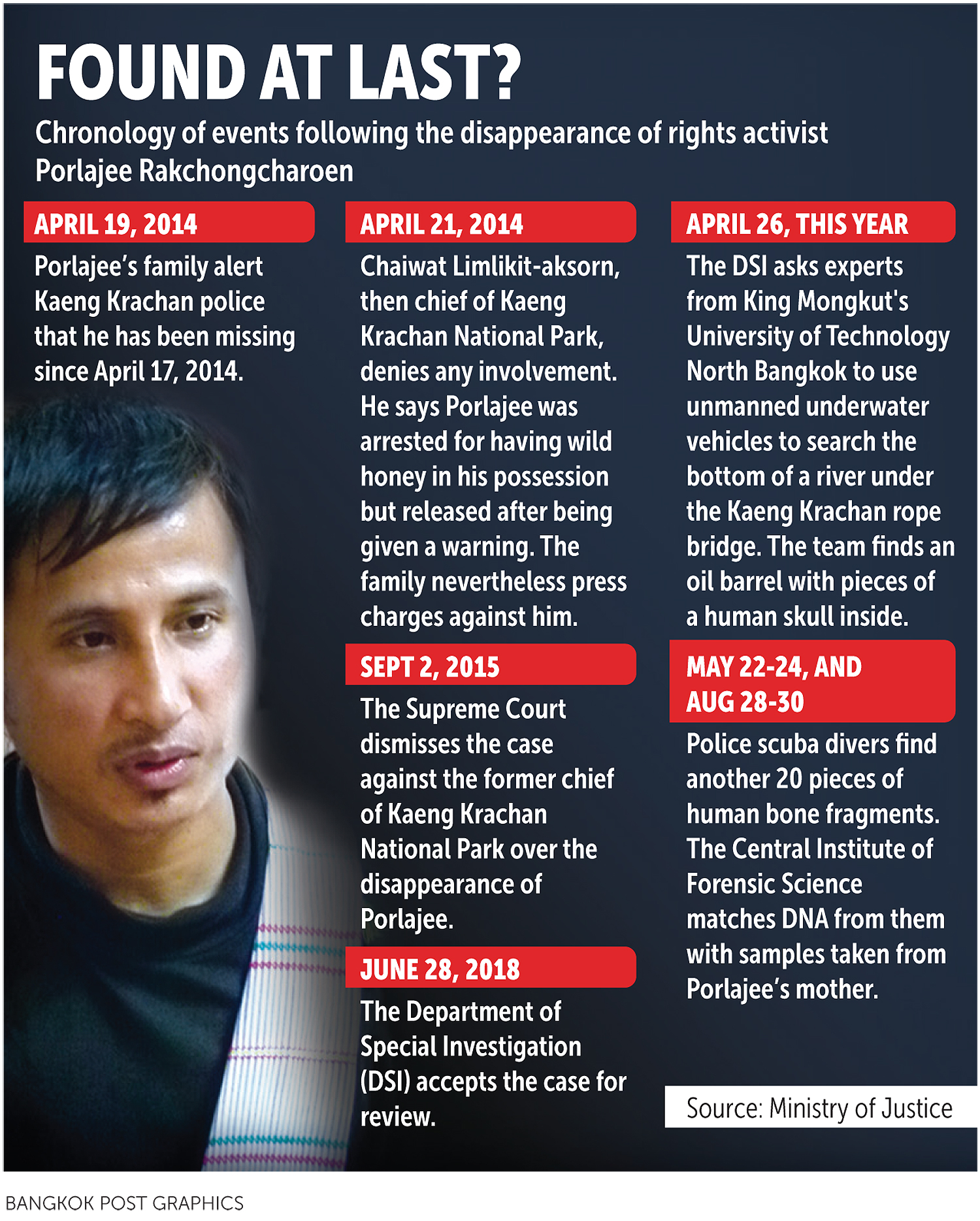