One of four paintings by an art student at Nakhonratchasima Rajabhat University that uses Ultraman to represent Lord Buddha. (Photo supplied by Prasit Tangprasert)

Renowned artist Chalermchai Kositpipat has supported a student under fire for painting Lord Buddha as Ultraman, a famous Japanese superhero protecting the world from evils.

Mr Chalermchai on Sunday said the art pieces painted by the student at Nakhonratchasima Rajabhat University show a courageous creativity that represents the thoughts of the young generation about Lord Buddha.

"What is happening shows a problem in our society. When young generations have creative ideas and use their imagination with a courage that reflects change, they are always criticised so that they do not want to do something new," Manager Online on Sunday quoted him as saying.

"Many kids can paint Lord Buddha as he was perfectly, but how many of them can think out of the box? This student can and she has done nothing wrong," the outspoken artist said. "Ultraman is the best character to represent Lord Buddha as far as her idea is concerned."

Mr Chalermchai is best known for the creation of Wat Rong Khun to show his dedication to the religion. The temple draws worshippers and tourists to his home province of Chiang Rai.

The art student, whose name was withheld, came under attack after two of her four paintings were shown in public at an exhibition at Terminal 21 in Nakhon Ratchasima last Tuesday. The images were later shared on social media.

The organiser later removed them from the show. 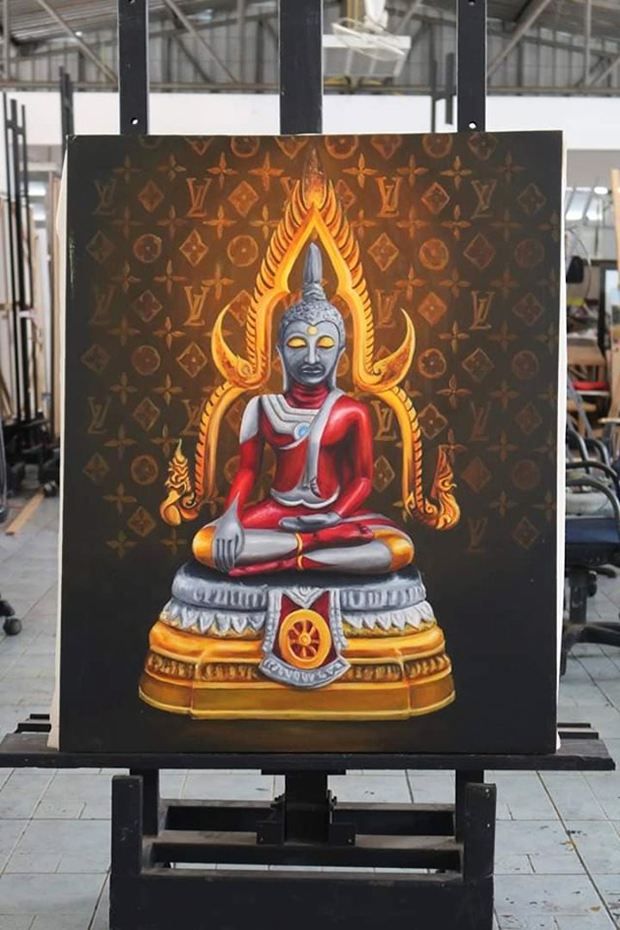 Another painting with the same concept of the student. (Photo supplied by Prasit Tangprasert)

On Saturday, the student was accompanied by provincial governor Wichien Chantharanothai and university vice rector Thawat Trachu and officials of the Buddhism Provincial Office and the Culture Provincial Office to call on Nakhon Ratchasima chief monk Phra Thepseemaporn.

She apologised to the monk and public for creating the paintings. But the student said she had no intention to ridicule or look down on Lord Buddha and the religion.

"I just wanted to show that Lord Buddha is a hero like Ultraman, who can stay calm among the temptations surrounding him and also protect human beings from evil to keep the world at peace," the student explained in tears.

Phra Thepseemaporn advised her to think thoroughly about religious issues due to their sensitivity and impact on worshippers.

The governor ordered all educational institutions in the province to check all work by students before presenting it to the public.