PRACHUAP KHIRI KHAN: Relatives of a five-month-old baby whose photo appeared on a web page advertising "adoption services" insisted on Wednesday they had not put the child up for sale as some people claimed.

They only wanted someone to adopt the boy, because his mother was a deaf mute unable to care for him alone and his father was in prison.

Images of babies, including the boy in question, were posted on a website page advertising adoption services and drew criticism and condemnation from netizens.

The two relatives - identified only as Mr Hin, 35, and Ms Sai, 31 -  told police they received phone calls from people who scolded them, accusing them of selling the boy on the web site.

Mr Hin, an uncle of the child, insisted his family had not put his five-month-old nephew up for sale as alleged. They merely contacted the page administrator, seeking someone to adopt the boy as they could not afford to raise him.

The boy’s mother was a deaf mute and could not take care of him herself. The boy's father was in prison, Thai media reported.

Ms Sai, the infant’s aunt, had seven children of her own to care for, and she was now pregnant again, Mr Hin said.

He wanted his nephew to have a better future. The website administrator had asked for his contact number and pictures of the baby to put on the website page. Afterwards, several people contacted him expressing an interest in adopting the boy, Mr Hin said.

He and Ms Sai had together cut the list of potential adoptive parents to four, but had not made a final decision.

A police senior sergeant major who was a distant relative had since learned of the problem, and had offered to adopt the baby, Mr Hin said.

The man was kind and could afford to take care of the child, so the family had decided to place the boy under his care. They were preparing the necessary documents to do this, but instead they had been accused of selling the boy, the uncle said. (continues below) 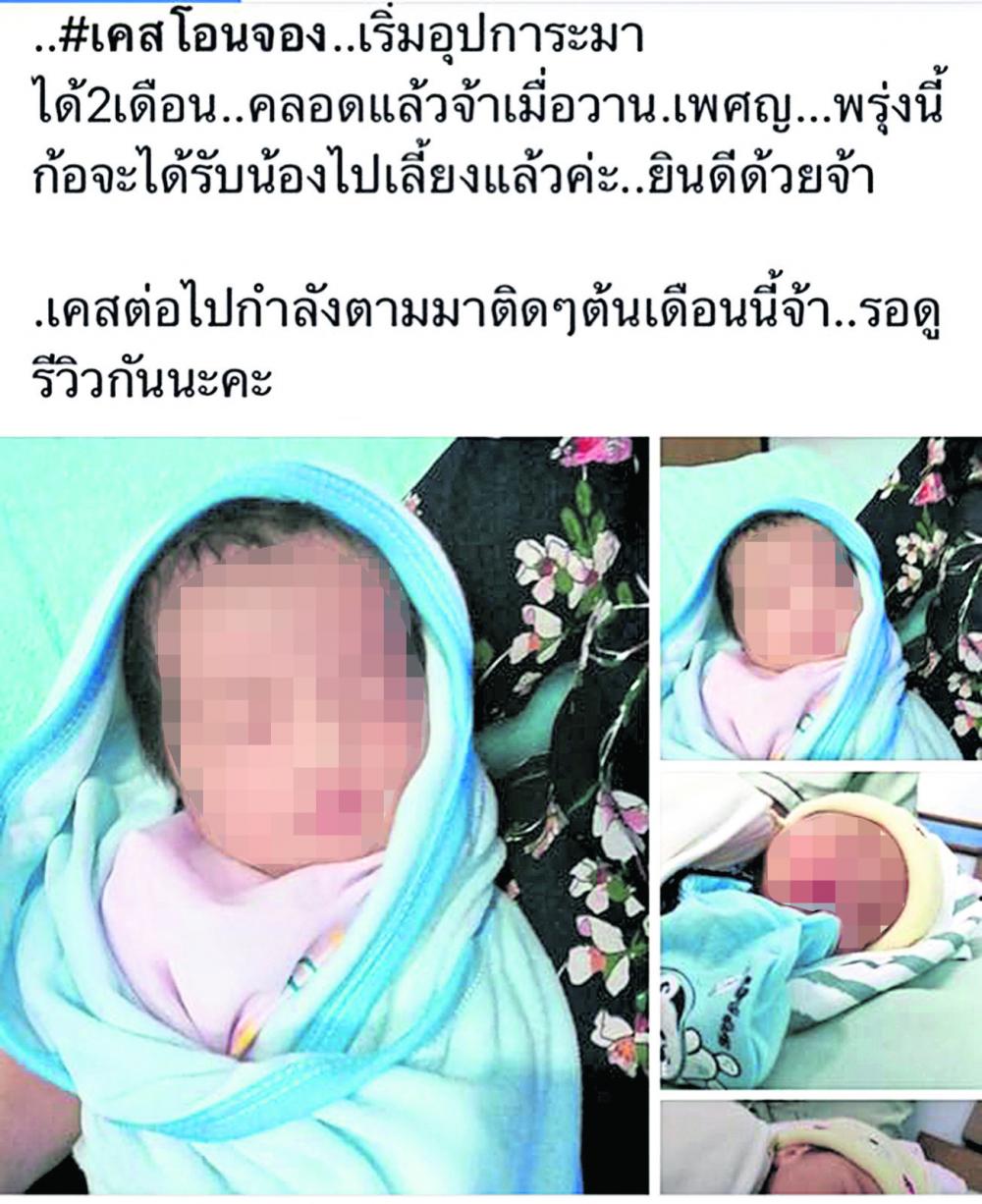 Pictures of babies are taken from a website advertising "adoption services". (Taken from the DOKJIK V.10 Facebook page)

The Anti-Human Trafficking Division has launched an investigation into what is believed to be the sale of newborn babies online, with website administrators suspected of brokering the illegal business.

According to police, some Facebook pages advertised babies to attract people wanting to “adopt’’ them.

Pol Maj Gen Surasak Suksawaeng, the provincial police chief, said he had ordered Hua Hin police to look into the case of the five-month-old boy.

However, he believed it was a misunderstanding and the baby was not put up for sale as widely commented on online.

He warned that people disseminating false information on social media could be in breach of the Computer Crimes Act. Families with infants who were wrongly accused had the right to file police complaints against them.

The sale of babies was treated as human trafficking, she said. The ministry was ready to provide protection for children under the Child Protection Act 2003.