Young environmental activists play dead as they participate in a Global Strike 4 Climate rally at the Natural Resources and Environment Ministry on Friday. (Photo by Chanat Katanyu)

About 200 young people stormed into the Natural Resources and Environment Ministry on Friday and dropped to the ground, feigning death as they demanded government action on climate change along with thousands of strikers around the world.

The young strikers were chanting "Save our Earth" as they marched into the government compound, before lying down on the ground to play dead.

"This is what will happen if we don't act on climate change now," said one of the strike leaders, Nanticha Ocharoenchai, 21.

"Today we are demanding that the Thai government declare a climate emergency and stop using fossil fuel."

Young children were seen carrying placards in one hand and holding a parent's hands in the other.

"I'll take my exams when you take action," another young protester said.

An official at the Ministry of Natural Resource and Environment was supportive of the student action.

"This is how the young people express their concerns, which we deem as a good sign and not at all a nuisance,” Adisorn Noochdumrong, deputy permanent secretary of the ministry, told Reuters.

The young protesters joined children throughout Australia and the Pacific rallying in a Global Strike 4 Climate, demanding government action against human factors bringing about climate change. 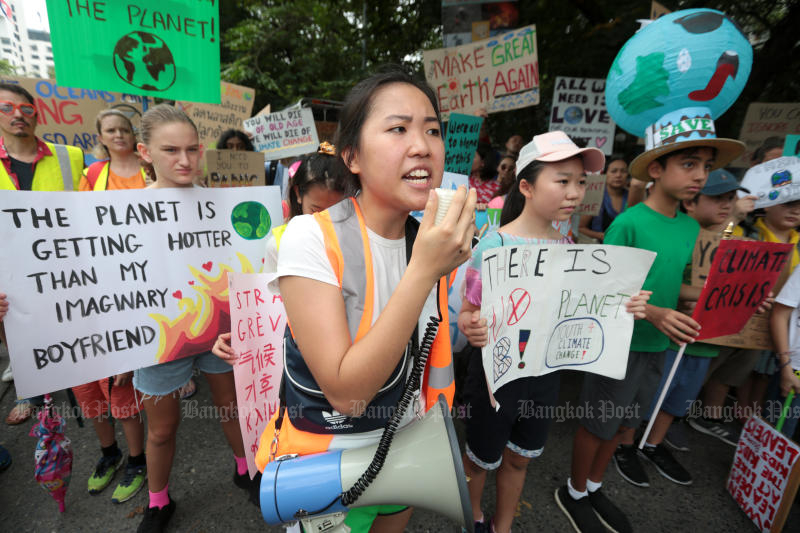 Young activists walk to the Natural Resources and Environment Ministry in a climate rally on Friday. (Photo by Chanat Katanyu)

The Minister of Digital Economy and Society (DES), Chaiwut Thanakhamanusorn, has proposed the setup of an Asean committee focused on fraud prevention from call centre gangs.

Hopes were fading on Thursday for rescuing survivors of the earthquake in Turkey and Syria, which has killed over 17,500 people in one of the deadliest tremors in decades.