Pol Cpl Sanyalak Jandam,24, left, of Kapho police station in Pattani, and Piyapong Ruangchuay, 31, son of a local leader were arrested in possession of drugs at a house in Bang Klam district of Songkhla on Monday night. (Pool photos, via Assawin Pakkawan)

SONGKHLA: A police corporal and a local leader's son were arrested and drugs seized during a police raid on a house in Bang Klam district on Monday evening.

The arrested policeman had earlier accused police from Provincial Police Region 9 of of kidnapping him and friends for a 500,000 baht ransom.

The two men were taken to Bang Klam police station on charges of colluding in possession of illicit drugs with intent to sell, and violating the firearms law.

Pol Col Seksan Churangsarit, deputy chief of Songkhla police, said investigators from Bang Klam police station and drug suppression officers from the Songkhla earlier received information that the house was a centre for selling and using drugs. Acting on the information, they obtained a warrant and raided the premises.

One of the men told the arresting officers that he was a policeman, but failed to produce a police card when asked. Further checks revealed he was Pol Cpl Sanyalak Jandam of Kapho police station in Pattani,  Pol Col Seksan said.

He would face both disciplinary and criminal action that would see him dismissed from the force, Pol Col Seksan said.

In May, Pol Cpl Sanyalak filed a complaint with Hat Yai police alleging that a team of police attached to Provincial Police 9 had kidnapped him and some friends for a 500,000 baht ransom in Hat Yai.

This resulted in three police officers being transferred and investigated for the alleged abduction.

Police handling the case learned that Pol Cpl Sanyalak was involved in illicit drugs, but did not find firm evidence implicating him at the time, a police source said.

Police on Tuesday took Pol Cpl Sanyalak to his house in tambon Khuan Lang of Songkhla, but found nothing illegal there.

The suspect denied all drug charges, but admitted to have carried a pistol. He claimed he made a phone call to Mr Piyapong on Monday after having not seen the man for a long time and they msde an appointment to meet at the house in Bang Klam district.

Upon entering the house, they saw kratom water inside a pot, but there were no other illicit drugs inside, he said. 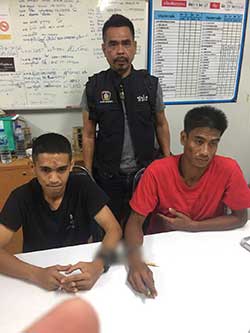 The arrested policeman, left, and the other suspect, at Bang Klam police station in Songkhla onTuesday. (Pool photo) 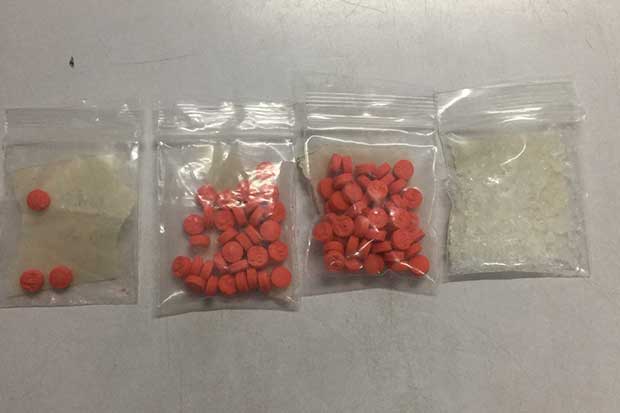 Packets of speed pills and crystal methamphetamine seized from the house. (Pool photo)