Pikulthong Royal Development Study Centre initiated by His Majesty King Bhumibol Adulyadej The Great in Narathiwat was set up to serve as a centre for studying farming and livestock. (Photo by Patipat Janthong)

Though it's been three years since the passing of the country's revered monarch, Pid Thong Lang Phra Foundation, a royally sponsored initiative applying the sufficiency economy philosophy, is still keen to uphold King Rama IX's legacy of caring for rural communities.

MR Disnadda said the sufficiency-economy philosophy of His Majesty King Bhumibol Adulyadej The Great was introduced to Thais five decades ago, but is still a vital solution for problems in society.

The chairman said he now wants to see more Thais adopt that knowledge to solve problems in their own lives.

The Pid Thong Lang Phra Foundation is showing the way by teaching the art of applying King Rama IX's ideas. The results so far are impressive: thousands of households in designated rural areas are using sufficiency-economy "tools" to boost their quality of life.

Those tools are being adopted to tackle problems of severe deforestation, land use and shortage of water sources, in a model development project the foundation has implemented in several provinces.

The key to its success is getting locals to participate in the solutions to their problems.

The tools are passed on through learning activities that show local communities how to apply the late King's development thinking in practical ways. In this way they are able to manage problems and control their own destiny.

The foundation was founded nine years ago with a mission to integrate the public and private sectors as well as civil society in finding development solutions for society, he said.

Under its first strategy, the foundation applied sufficiency philosophy from 2009 to 2015 in eight rural districts of five provinces -- Nan, Udon Thani, Kalasin, Uthai Thani and Phetchaburi.

The strategy was to help the communities build infrastructure for water supply, soil conservation, rehabilitation of their natural resources, and job creation.

As a result, living standards for 7,990 families in the districts have risen significantly, said MR Disnadda.

The families now have access to a clean water supply. Better still, their total annual revenue from farming has increased from 109 million to 1.04 billion baht, he added.

The foundation helped targeted communities set up 70 relief funds with a total of 15.78 million baht to help 1,634 families, he said.

The successful application of King Rama IX's ideas saw the five-year project adopted by the government as a nationwide model. The National Economic and Social Development Council (NESDC) made the project a core of its 2014-2017 management plan, according to MR Disnadda.

Under its second strategy (2016-2020), the foundation has extended its development projects in the same five provinces with a goal of helping communities stand on their own feet and achieve long-term self-reliance, he said.

It has also expanded its projects to other provinces, including Khon Kaen, Yala, Pattani, Narathiwat, Nakhon Nayok, Krabi and Roi Et, as well as northern border provinces hit hard by the drugs trade.

The first two phases of the foundation's strategy are also in tune with the United Nation's Sustainable Development Goals (SDGs), adds MR Disnadda.

First applied in the 1970s, sufficiency economy theory is based on fundamental principles of Thai culture.

At its core lie virtues of moderation, prudence, and self reliance as guidelines for living. Significantly, intelligence and perseverance are also emphasised as prerequisites for genuine contentment in one's life.

It left the country vulnerable to the spectre of communism, while opium cultivation remained a severe problem in northern hilltribe areas.

To address these problems, in 1969 HM King Rama IX set up the first royal project on Doi Pui in Chiang Mai province after visiting an opium-growing hilltribe village on the mountain.

According to MR Disnadda, His Majesty realised the hilltribe could cultivate local peaches instead of opium, an ability which was harnessed by his royally sponsored Doi Pui Development Centre to lift the community out of poverty.

Soon after, the 1973 global oil crisis saw Thai inflation reach 10.3%, leading to a shortage of goods. The crisis was eased with the launch in 1975 of another royally-initiated unit, the Phra Dabos Foundation, to promote education and employment opportunities among young people, he said. 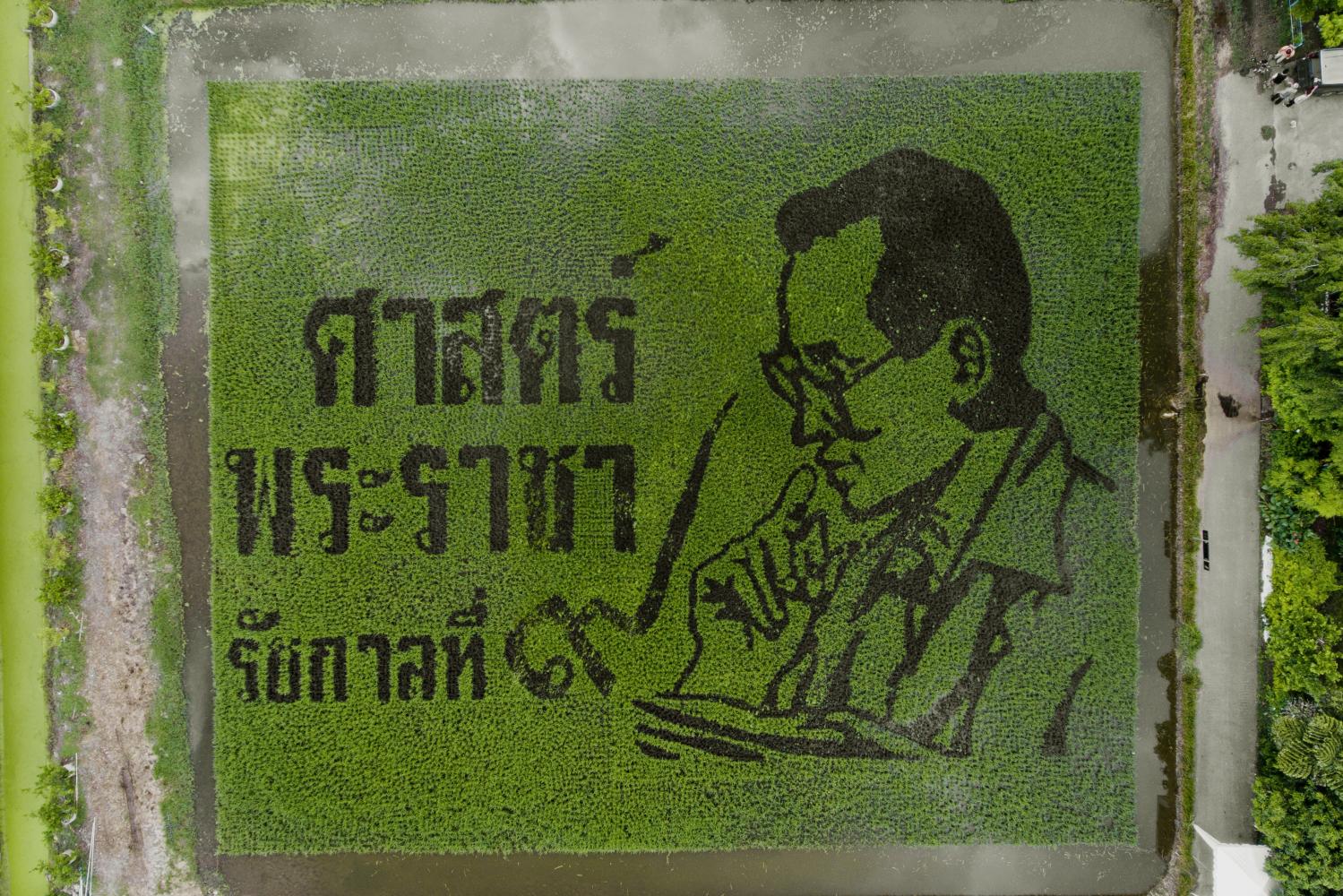 An aerial view of an experimental paddy field where a pattern is created honouring His Majesty King Bhumibol Adulyadej The Great's theory on farm improvements. Krit Promsaka Na Sakolnakorn

The kingdom recovered from the crisis and began industrialising under its 6th NESD plan (1987-1991), but agriculture suffered as a result.

To deal with the impact, His Majesty founded the Huay Mongkol royal development project in Prachuap Khiri Khan's Hua Hin district to boost the agriculture sector.

MR Disnadda notes that the number of royally-initiated projects across the country has since grown to 4,741.

He adds that King Rama IX remains the pioneer and guide for sustainable development work in Thailand. Meanwhile Her Royal Highness Princess Srinagarindra The Princess Mother, who founded the Mae Fah Luang Foundation in Chiang Rai, has applied knowledge in her royal projects on Doi Tung mountain since 1988.