Siriraj Hospital is lightened up on Sunday in remembrance of His Majesty King Bhumibol the Great, who passed away there on Oct 13, 2016. (Photo by Wichan Charoenkiatpakul)

Candles lit up Siriraj Hospital on Sunday night as mourners paid their respects to His Majesty King Bhumibol the Great, who passed away three years ago.

People began gathering on Sunday morning to attend religious ceremonies for the late King, culminating in a moving candle-lighting ceremony that capped a day of mourning across the nation.

Siriraj Hospital holds a special place in people's hearts, since HM King Bhumibol passed away there on Oct 13, 2016.

The Impossible Dream, one of the songs composed by the late King, was played during the candle-lighting ceremony to highlight the determination of the yellow-clad Thais at the hospital to follow the example set by King Bhumibol in doing good deeds for the country.

The song was composed in 1971, with lyrics by Thanpuying Maneerat Bunnag callilng on Thais to do great things for the kingdom.

The playing of the Royal Anthem brought many to tears as they showed their love for the late monarch. 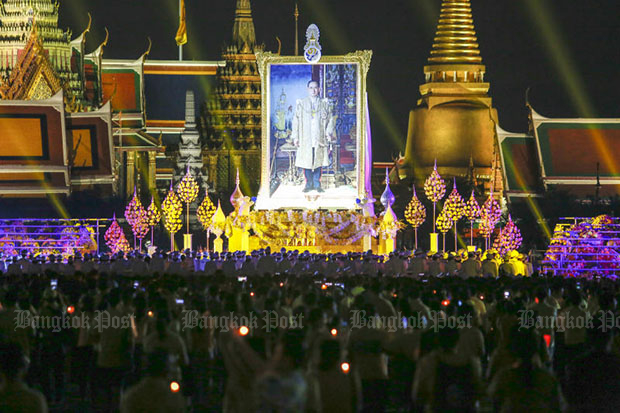 A colourful light show was held at Sanam Luang on Sunday night in remembrance of His Majesty King Bhumibol Adulyadej the Great. (Photo by Pattarapong Chatpattarasill)

The candle-lighting ceremony was held at Sanam Luang and in other provinces in front of a portrait of the late King. Prime Minister Prayut Chan-o-cha led all Thais in lighting the candles at Sanam Luang in memory of his passing.

The events began on Sunday morning, with Thais across the country offering alms to monks in merit-making ceremonies for the late King.