Alexander de Rooij uses a sheet of paper to hide his face from the press during a media briefing after he was arrested for overstaying his visa, on Koh Samui on Monday. (Photo by Sitthipong Charoenjai)

SURAT THANI: Police have arrested a Dutchman and a Nigerian in two separate operations to clamp down on foreigners overstaying their visas.

Alexander de Rooij, 46, was arrested while walking on a road outside Big Trees Village, a resort on Koh Samui, on Monday. Immigration police checked his passport and found that his immigration stamp had expired on July 21 this year.

Surat Thani immigration police chief Pol Col Supparuek Phankosol said Mr de Rooij entered Thailand through Tak Bai district of Narathiwat province and was given a stamp allowing him to stay until July 20. He was sent to Bor Phut police station to be charged with overstaying his visa and will be banned from entering the kingdom for five years, he added.

Ezihe Collins, 35, was captured on Sunday as he was driving a motorcycle from his house on Koh Phangan. 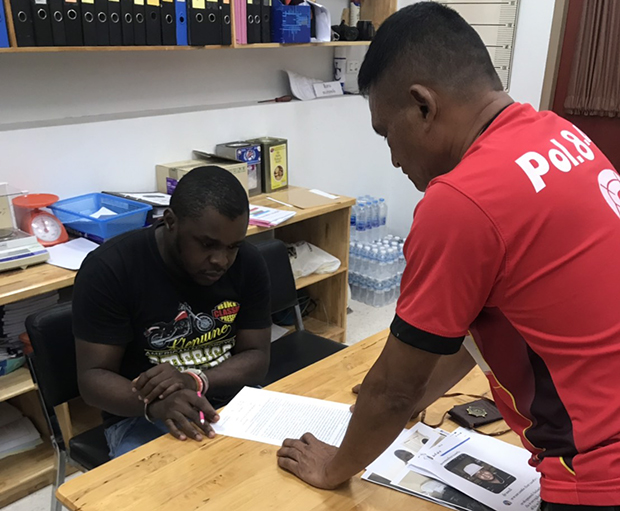 Pol Col Sathit said a search of his house on Sunday uncovered six bags of cocaine weighing almost 10 grammes. In a further inspection on Monday, authorities seized two books containing lists of names, believed to be his customers, and 34,000 baht in cash.

The Nigerian was sent to Koh Phangan police station to be charged with staying in the country illegally and possessing illicit narcotics.

The Immigration Bureau has ordered police to crack down on foreign overstayers on the provincial islands of Koh Samui, Koh Phangan and Koh Tao.