Kasetsart University students take their first ride on the BTS Green Line extension, which began operating services to the university on Wednesday. (Photo by Patipat Janthong)

Operators of both the skytrain and MRT began services to several new stations on Wednesday, offering free trips until normal operations start next year.

The line will be extended to Khu Khot station next year.

The skytrain operator expects ridership on the line to grow to 100,000 a day now it connects to the  university, and to double to 200,000 when it reaches Khu Khot.

Prime Minister Prayut Chan-o-cha presided over the opening of the new stations, and promised the route will be completed next year.

They will operate from 10am to 4pm until March 30, when the line from Tao Poon to Tha Phra station is scheduled for completion. 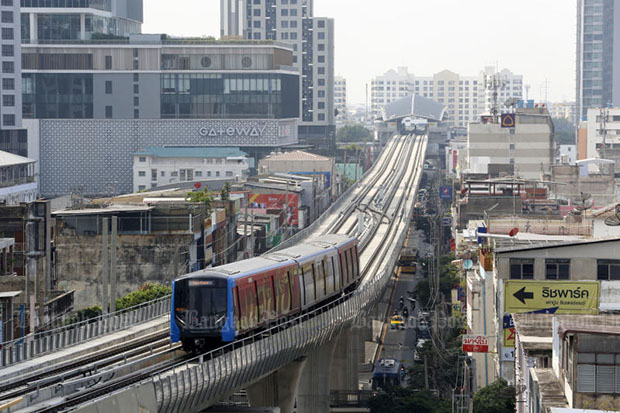 An MRT train travels between Tao Poon station and Bang Pho, one of the new stations on the Blue Line, on Wednesday. (Photo by Pornprom Satrabhaya)

Thailand's exports in April rose at a much slower pace than the previous month and less than expected, commerce ministry data showed on Friday, coming under the pressure of Russia's invasion of Ukraine and China's lockdown measures.