Poor rating for Prayut after 6 months in office: Poll

Prime Minister Prayut Chan-o-cha has received a poor rating after six months as head of an elected government, according to the result of an opinion survey by the National Institute for Development Administration, or Nida Poll.

The poll was conducted on Nov 29-Dec 3 on 1,278 people aged 18 and over of various levels of education and occupations throughout the country to gauge their satisfaction with the performance of Gen Prayut and members of his cabinet since the election.

Asked to rate Gen Prayut's overall performance, 33.72% of respondents said he has fared poorly in handling the country's administration because his government has not been able to solve economic problems, the people have not been well taken care of, justice has been overlooked and actions have been taken only to protect his cronies. A further 25.98% said his performance has not been satisfactory in various fields.

On the positive side, only 8.92% said Gen Prayut has performed very well and his decisiveness, determination to work and honesty are beyond doubt, while 30.13% said he has performed fairly well, especially in the area of maintaining peace and order in the country.

In terms of ideology, 47.73% said he is a man with a strong determination to work for the country and the people; 47.34% said he has only tried to maintain power for himself and his cronies; and 4.93% were not interested or had no comment.

Regarding decisiveness, 48.12% said he is capable of making important polical and administrative decisions; 46.32% said he lacks decisiveness; and 5.56% were not interested or had no comment. 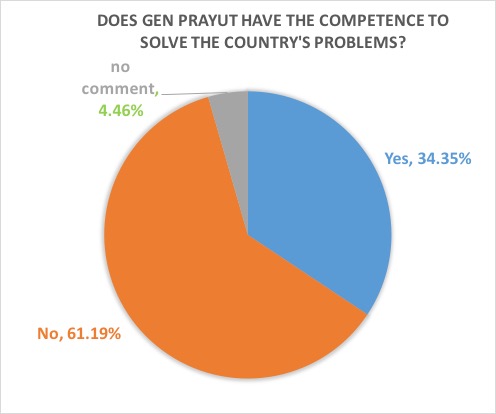