The Royal Thai Navy is preparing to deal with what it calls a "new situation" after learning that Myanmar is going to send its attack submarine to the Andaman Sea for security missions. 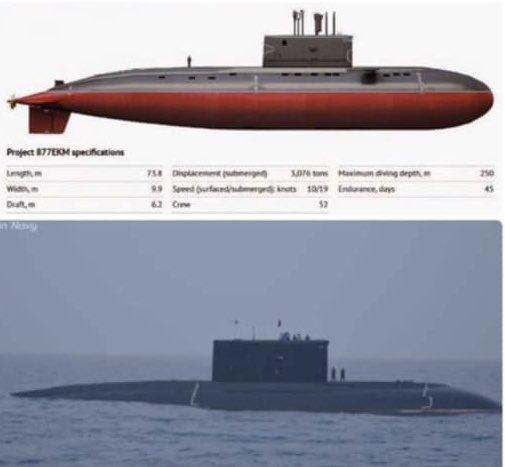 A photo of a Russian-made Kilo Class submarine which Myanmar will use later this month from the Royal Thai Navy's Facebook page.

The 3rd Naval Area Command, which oversees territories in the Andaman Sea, has been told to keep a watch on the submarine, which can operate underwater for up to 45 days.

Myanmar plans to use its submarine for "security and protection of its maritime interests", Vice Adm Prachachart, the director-general of the Naval Acquisition Management Office, said.

The Indian government has been purchasing the Russian-made Kilo Class submarines since 1980 and made further adjustments to improve capacity at its shipyards.

The model -- with a displacement of 3,000 tonnes -- is well known for its quiet operation. The sub can be equipped with various types of weapons and can dive to a depth of 300 metres and accommodate 52 officers.

Thailand is in the process of buying three submarines from China after the previous coup-appointed government approved the 36-billion-baht purchase -- the first in over 60 years.

The navy signed an agreement to buy a Yuan Class S26T submarine worth 13.5 billion baht from China in 2017.

Its construction began on Sept 7 last year in China, and it is expected to be delivered to the navy in 2023.

The navy reportedly has asked the government to allocate 12 billion baht to buy the second submarine, but a final decision will depend on the House of Representatives, which is considering the state's 3.2 trillion baht budget request for the 2020 fiscal year.

"We're scheduled to clarify the purchase plan today," Vice Adm Prachachart said, referring to their meeting with the House special committee, which has been set up to scrutinise budget details.

Vice Adm Prachachart also rejected rumours about a "budget suspension", which surfaced last month that the navy would suspend the submarine plan and instead buy less expensive frigates.

"That is confusion in communication," he said.