A pickup truck rams into a roadside electric pole in Si Satchanalai district, Sukhothai province, on Jan 1, killing a woman and injuring four others. (Photo by Phubes Faites)

The death toll from road accidents during the "seven dangerous days" of the New Year holidays dropped by almost 20% to 373, the lowest level in five years.

Most of the vehicles involved in the crashes were motorcycles, which accounted for 83%, said Deputy Interior Minister Niphon Bunyamanee said on Friday, citing the latest report from the Road Safety Directing Centre.

Drink driving and speeding were major causes of the crashes. A total of 230,603 people were charged with traffic offences, including failing to wear crash helmets (56,447), and driving without licences (51,686).

When comparing to last year’s figures, the number of New Year holiday road accidents was 370 lower. The numbers of deaths and injuries during this New Year holidays were also down from the previous year by 90 and 393, respectively, he said.

Court of Justice spokesman Suriyan Hongwilai said on Friday there were 25,376 traffic offence cases, mostly drink-driving, sent to courts from Dec 27 to Jan 2. Of the total, the courts already ruled on 24,986 cases, or 98.5%.

Drink-driving topped the list of traffic offences sent to courts during the seven-day dangerous New Year period, with 23,723 offenders. The other top two offences were driving without licences (3,879) and driving under the influence of drugs (344), said Mr Suriyan.

Prime Minister Prayut Chan-o-cha said on Thursday despite the improvement, he was not happy with the figures since hundreds of deaths were still considered high. Authorities must remain vigilant and continue to find measures to lower the numbers further for the next long holidays during Songkran, he added.

He also floated the idea of changing the name of the monitoring period from "seven dangerous days" to something more positive. He suggested "seven days of happiness" so people think more of their loved ones and their own safety when driving during long holidays.

While the death toll dropped, it is still a far cry from the international goal adopted by the Land Transport Department at below 10 per 100,000 population this year, or 664 a year based on the population of 66.4 million in the 2018 census. 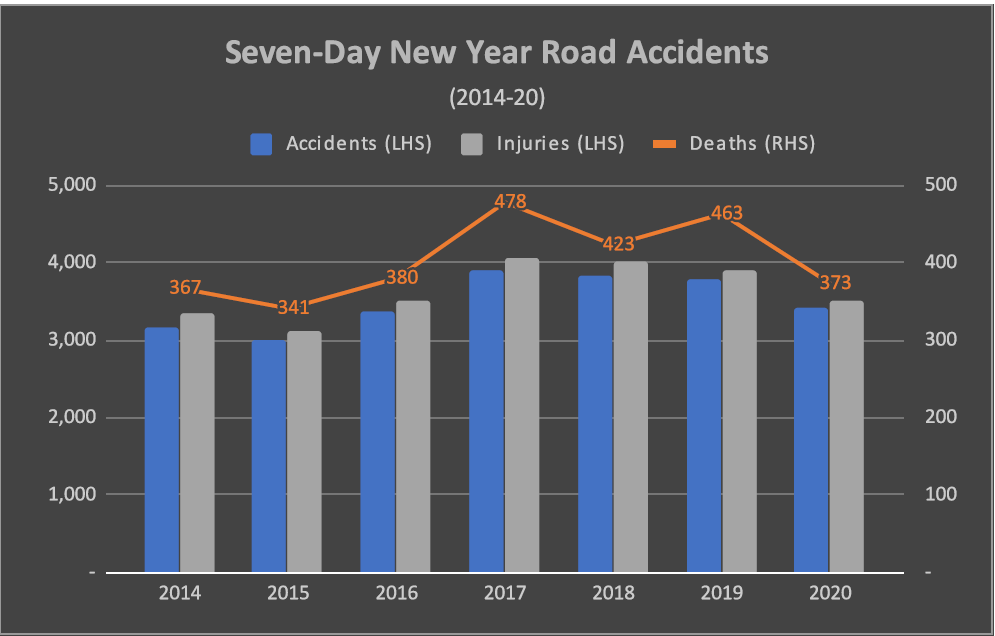