Then, this week, unusually large patches of green algae appeared, clogging up nets and making it almost impossible to fish.

Both the Mekong's strange colour and the algae have heightened worries about the health of the river that more than 60 million people in Southeast Asia depend on for their livelihoods.

"This is unnatural," fisherman Tongchai Kodrak said of the algae and the blue waters, which both signal a lower level of life-bringing sediment in the water.

He says a bit of algae appears every dry season but this year it is more than anyone can remember.

The year 2020 is shaping up to be crucial for the Mekong River, which is under threat from climate change and faces uncertain changes wrought by two new hydropower dams that have come online in Laos in the last three months.

Many fear the new Lao dams — the first on the Lower Mekong that generates most of the vast system's sediment — will impede the nutrient flow.

Scientists say the Mekong’s new blue colour — first seen in November in northern Thailand and now evident down the river into Cambodia — is caused by shallow, slower moving waters.

Normally, sediment flows all through the 2,390km Lower Mekong, nourishing fishing grounds and farmlands as it flows in from China then winds past Myanmar, Laos, Thailand, Cambodia and Vietnam.

It is the sediment that keeps the river a muddy brown, but when the water flow slows, the sediment can settle. (continued below) 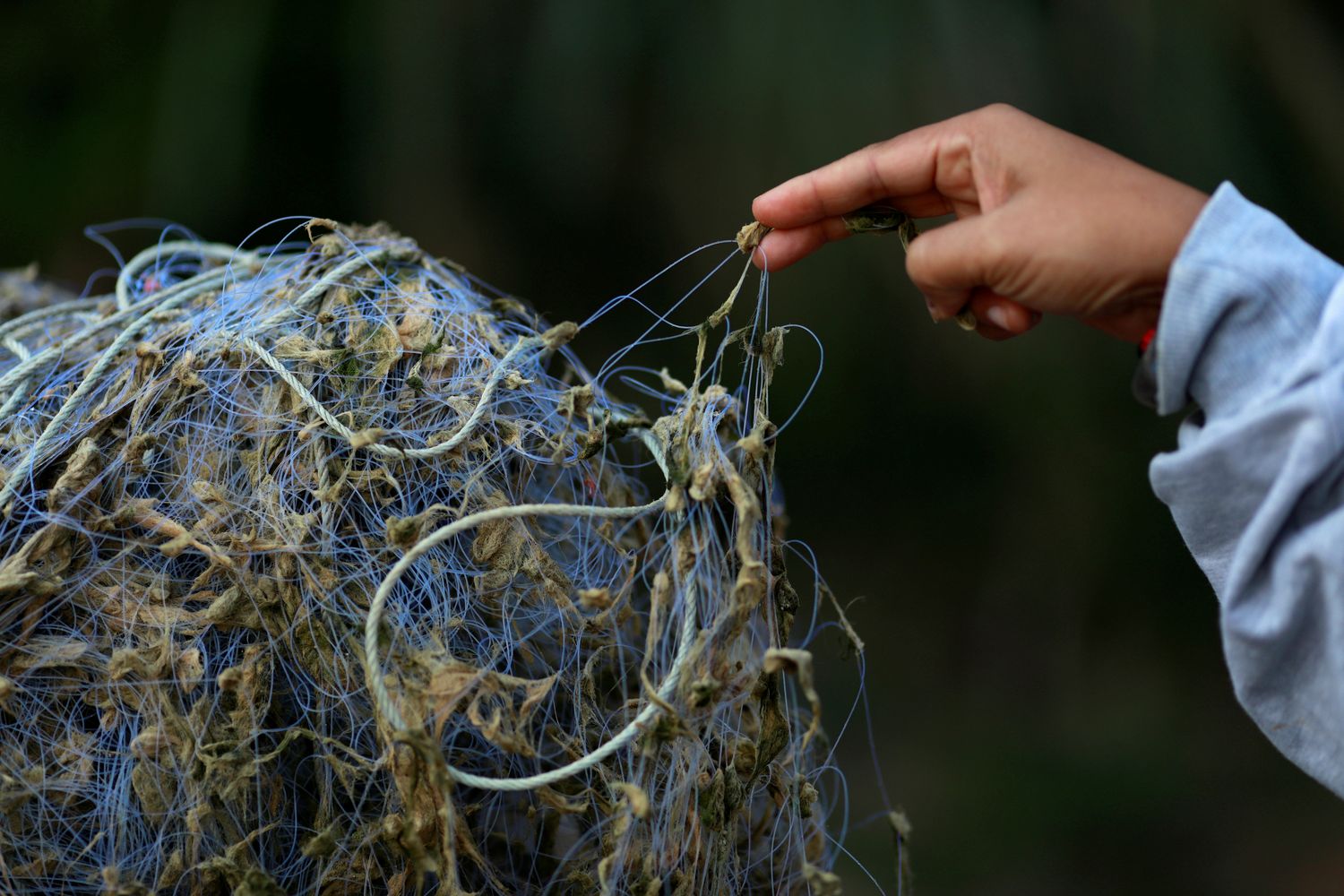 Algae are seen in a fishing net near Mekong river bank outside Nong Khai on Friday. (Reuters photo)

The fishers and farmers of the Thai village of Bungkhla say they have seen the Mekong gradually changing before their eyes in the past decade, with less predictable rainy and dry seasons and fewer, smaller fish.

But in the past year, the change has been more dramatic as a drought during the last rainy season, from May to October, extended into this dry season.

"I've never seen the river this dry," said Tongchai, 52, who has plied the river since he was a teenager.

The drought — which saw the Mekong's levels at lows not seen for 50 years — is fuelled by El Nino, a naturally occurring weather phenomenon related to warming seas that climate scientists predict will become more frequent as average global temperatures rise.

The Mekong’s lower regions are also endangered by rising seas threatening to inundate its delta in southern Vietnam. Ocean levels are already increasing saline levels in parts of the river, rendering the water useless for irrigation and threatening native fish.

Climate change will mean more unpredictable and extreme weather, according to the Mekong River Commission, an intergovernmental organisation. That is bad news for farmers and fishermen who for centuries have relied on the river’s yearly ebb and flow.

Environmental activists argue that while hydropower does not add greenhouse gases to the atmosphere in the way coal-fired plants do, the region’s planned hydro projects nevertheless represent a huge threat to the river.

Advocates of hydropower argue that the fast-growing region needs electricity and dams with reservoirs are useful in controlling floods and storing water during droughts.

How much of the changing Mekong is caused by climate change and how much by damming is at the centre of a controversy surrounding hydropower development as Laos, backed by Thailand’s state electricity company, and now Vietnam’s state power company, moves ahead with plans to build nine new hydropower dams on the Mekong.

While 11 dams upstream in China have affected the water’s flow in the past decade, the new Lao dams are worrisome because the plains of Laos are where the Mekong begins to pick up most of the sediment that feeds the system, said fisheries researcher Tuanthong Jatagate.

A professor of agriculture at Thailand’s Ubon Ratchathani University, Mr Tuanthong says there is no doubt that Xayaburi’s new operations have contributed to the recent changes.

“There are many factors overall, but the main one is that the Xayaburi holds water by blocking the flow for electricity generation,” Mr Tuanthong said.

Satellite photos of Xayaburi from Jan 3 by Planet Labs Inc showed the blue-water phenomenon was visible on both sides of the dam, though the image did not make clear how far upsteam it extended.

In addition, environmentalists say dam-building blocks the migration of dozens of fish species that feed millions of people, especially in Cambodia.

Xayaburi’s main developer, Thailand’s CK Power Plc, has declined requests for interviews from Reuters and did not respond to written questions sent this week.

CK Power, a subsidiary of Thai construction company Ch. Karnchang Plc, has spent 6 billion baht ($200 million) on “fish ladders” and sediment gates that the company has said will ensure the Mekong’s fragile ecosystem will not be harmed.

But activists say those systems are untested.

In the meantime, villagers are keeping a watchful eye on the water and the weather.

In Bungkhla, fishermen like Tongchai don't go out on the water so much any more. They say they mostly catch algae.

"There have been fewer fish in the past few months and some types have disappeared," Tongchai said. 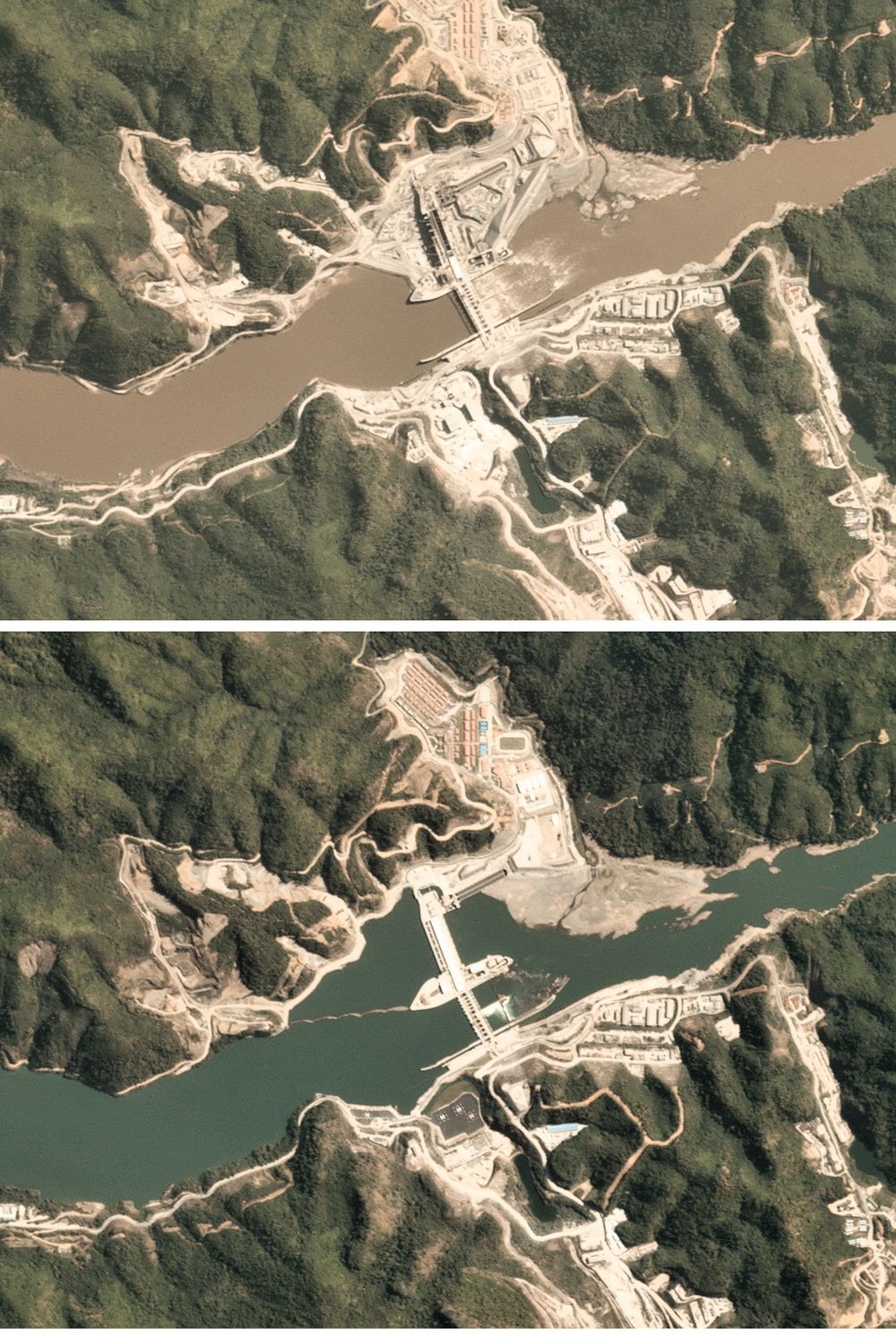 A combination photo of satellite images shows the normally brown Mekong River, with the Xayaburi Dam astride it, near the town of Xayaboury, Laos, on Dec 24, 2017 (top) and the river, which has turned blue due to drought and other factors reducing sediment, on Jan 3, 2020. (Planet Labs Inc/Handout via Reuters)