Air before prayers: Worshippers at the Erawan shrine at Ratchaprasong intersection say their prayers without lighting any incense sticks as requested by the management in a move to help cut air pollution and cope with increasing PM2.5 dust pollution across the capital. (Photo by Nutthawat Wicheanbut)

The government must come up with more practical measures to tackle the ultra-fine PM2.5 dust, especially since its national agenda on haze management appears to have made little progress over the past year, university students said.

"The seasonal dust pollution has returned, it just never goes away," said Omthip Koetphon, a fourth-year communication arts student from Chulalongkorn University, who yesterday led 20 fellow students to file a complaint with authorities at the Government House.

The students also urged the government to adopt better measures such as installing more dust detectors, and take more drastic measures such as banning open-air fires or even closing down polluting factories to curb dust at its source.

"Thailand doesn't have an agency with full authority to order polluting activities. We need an omnipotent agency like the United States Environmental Protection Agency that can order any activities that generating pollution to stop," said Mr Sonthi, who also held a high post at the Environment Ministry.

Neither the Pollution Control Department, nor the Environment Ministry have the authority to order factories to stop polluting or stop trucks from entering the city, he said, as if explaining why the pollution problem exists. 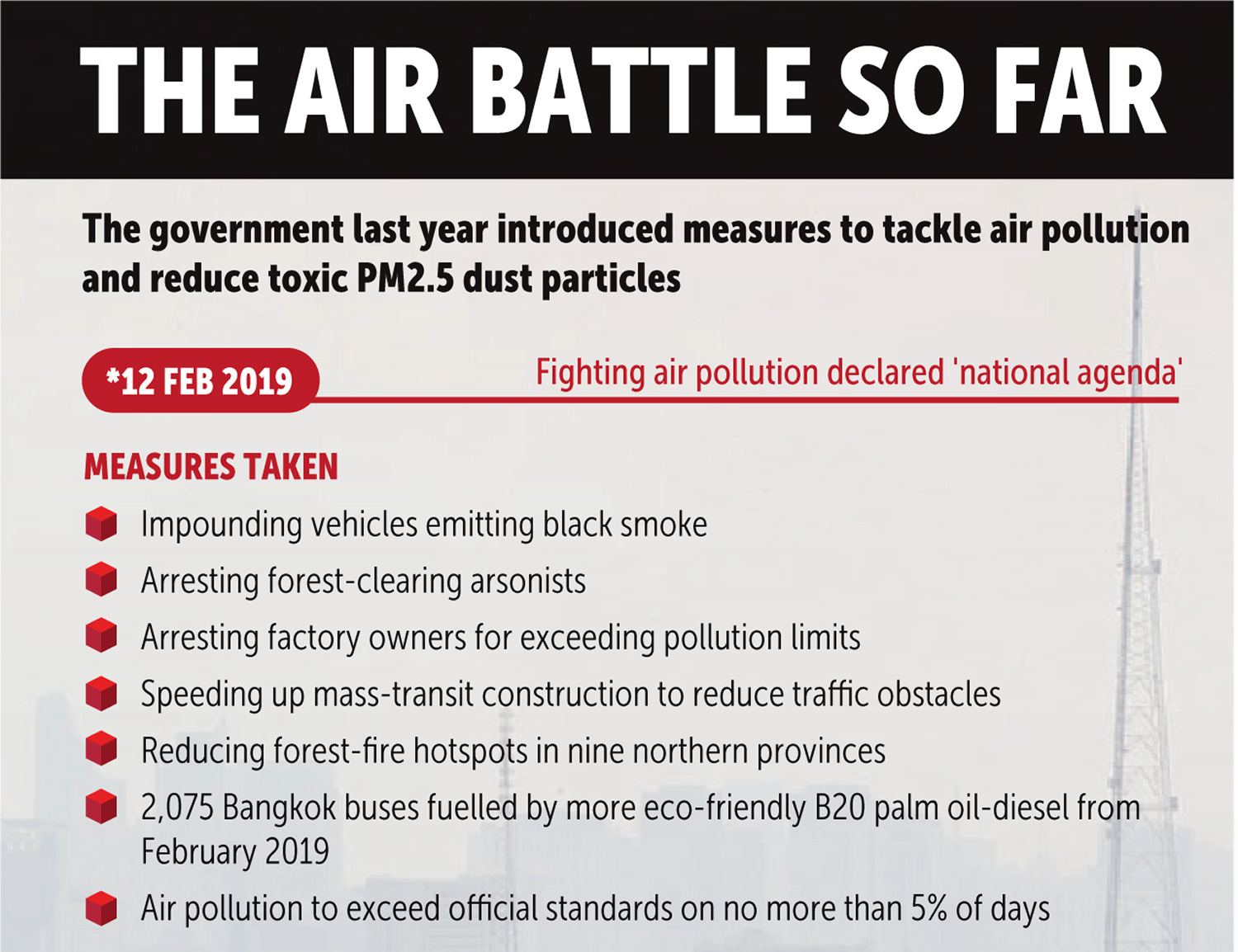 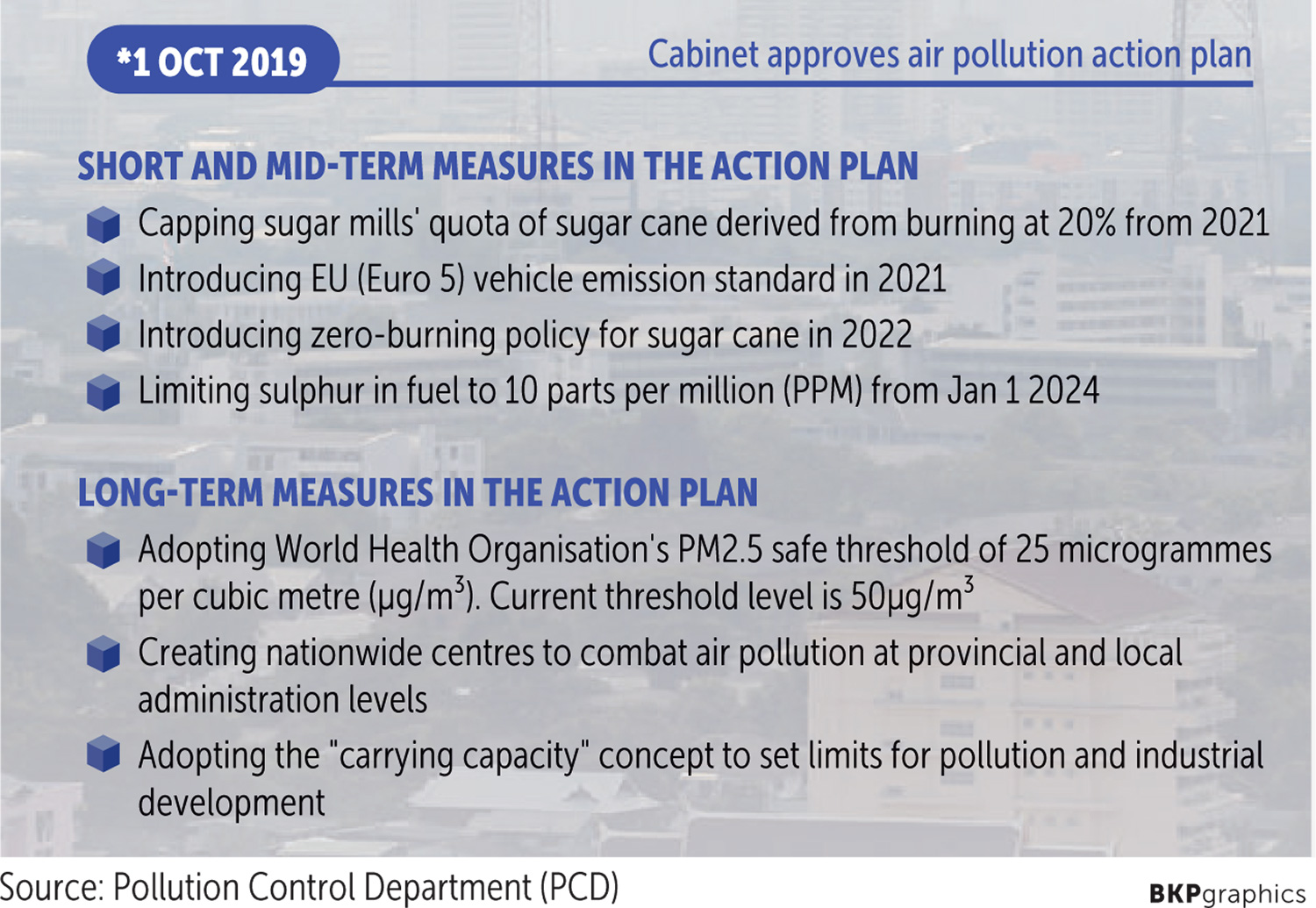 Smog of PM2.5, with particulate matter less than 2.5 micrometres in diameter, has shrouded the capital since last week.

"We want the government to stop activities that emit dust immediately," Ms Omthip said. "Authorities should also consider keeping the price of face masks low, especially at a time when the dust levels are so high and not many can afford them."

The administration put fighting air pollution on the top of its agenda on Feb 12 last year, when Bangkok and many neighbouring provinces were hit by dangerous pollutants. Yet, despite all these promises, the level of air pollution has barely budged.

Pollution was recorded at between 53 and 109 microgrammes per cubic metre (µg/m³) against the so-called safe limit of 50 µg/m³.

Many areas in Lampang province have undergone a similar situation for nine consecutive days while other provinces like Chiang Mai are beginning to bear the brunt, the official said.

Gen Prayut, meanwhile, is pleading with society to understand why the government is unable to take drastic measures. 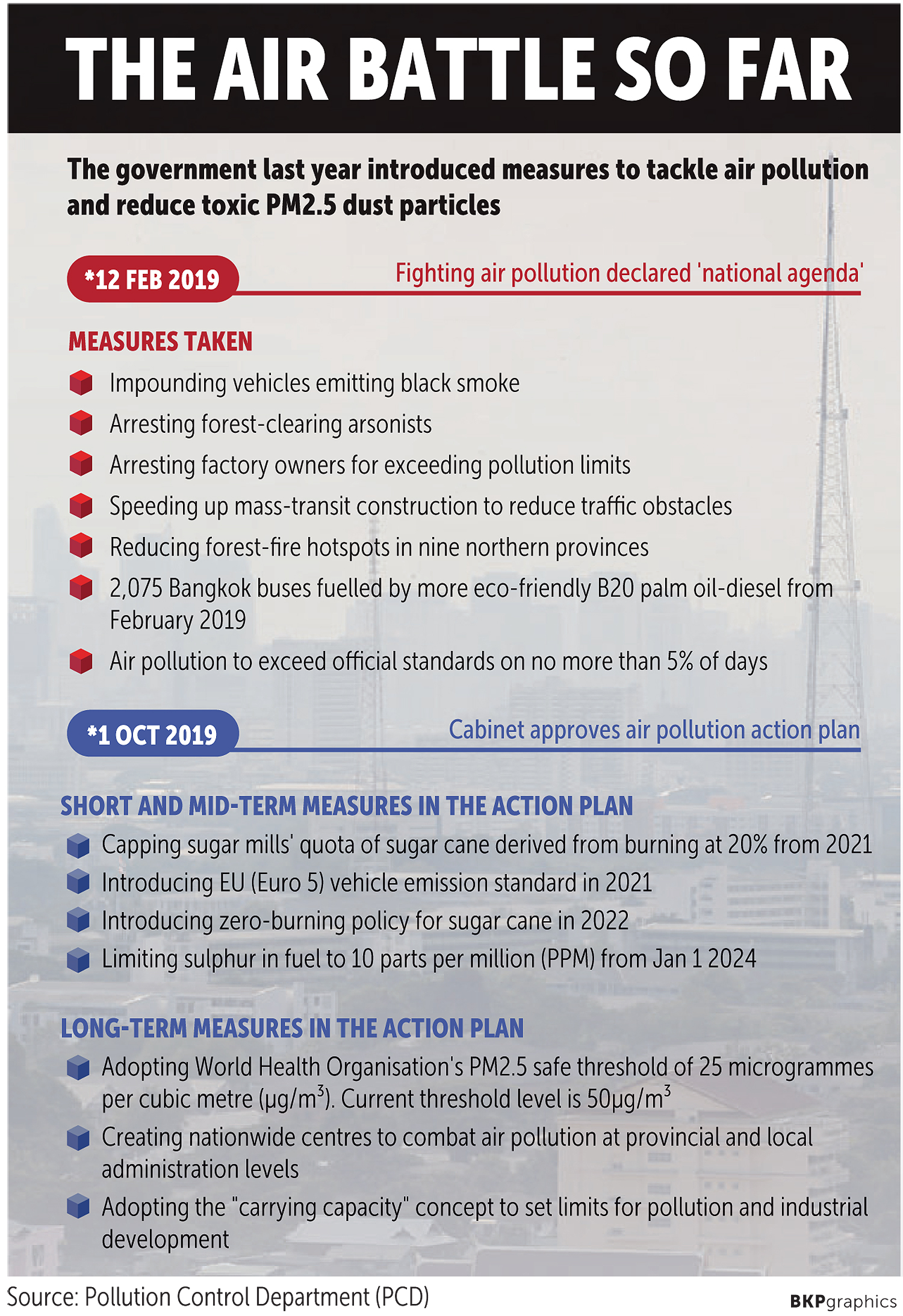 "If the air pollution worsens, the government can order trucks and vehicles not to enter the city. My question is who will be hardest hit by such drastic measures? Instead, we should help each other overcome this problem," he said.

In Bangkok, traffic is the main source of pollution, accounting for 72.5% of the dust, followed by 17% from factories, the premier said. Trucks are believed to be the biggest polluters.

Environment Minister Varawut Silpa-archa said yesterday the Pollution Control Committee is preparing to propose stringent measures to better deal with the pollution, but did not elaborate.

"I'd rather ask whether society can really accept those measures if they come into effect," he said.

Mr Varawut also said the pollution wasn't so bad because the government has launched many measures, notably moves to curb polluting vehicles. He said the level of PM2.5 is less than in the same period last year.

However, the overall air quality in Thailand is getting worse, according to the Pollution Control Department which released its 2019 pollution report yesterday.

The number of hotspots in the North, which indicate heat sources, also soared by 54% from 2018. They were linked to wildfires which increased PM10 levels.

As for other types of pollutants, the report found the amount of garbage increased by 3% from 2018 to 28.7 million tonnes.

PARIS: While the United States and Europe waged a 17-year trade battle over subsidies to Boeing and Airbus, China poured money into its own commercial aircraft to take on the Western aviation duopoly.