The Constitutional Court has acquitted the opposition Future Forward Party of seeking to overthrow the country's constitutional monarchy.

The court found regulations, press interviews and speeches made by senior FFP figures were not deemed to undermine the monarchy as claimed. It ruled to reject the petition.

"The accused have not acted in their rights and liberties to overthrow the constitutional monarchy," said Taweekiat Meenakanit, one of the judges.

A total of 150 police officers were deployed to beef up security at the Constitutional Court before the ruling, Thai media reported, but Mr Thanathorn and other party members were at the party’s head office on the eight floor of the Thai Summit Building.

Future Forward secretary-general Piyabutr Saengkanokkul said the case should never have been filed. The FFP never had any intention of undermining the monarchy, he said, but instead was trying to protect the constitutional monarchy with the king as head of state.

He blamed military coups, not political parties, for undermining democracy under the monarchy.

Mr Piyabutr said the party will on Wednesday or Thursday submit a motion to the House of Representatives to set up a House panel to study measures to prevent military coups.

Although the petition to seek the disbandment of the party was thrown out, there is still a movement to destroy the FFP, he said.

Mr Thanathorn said his party pledged to continue its work in parliament constructively. 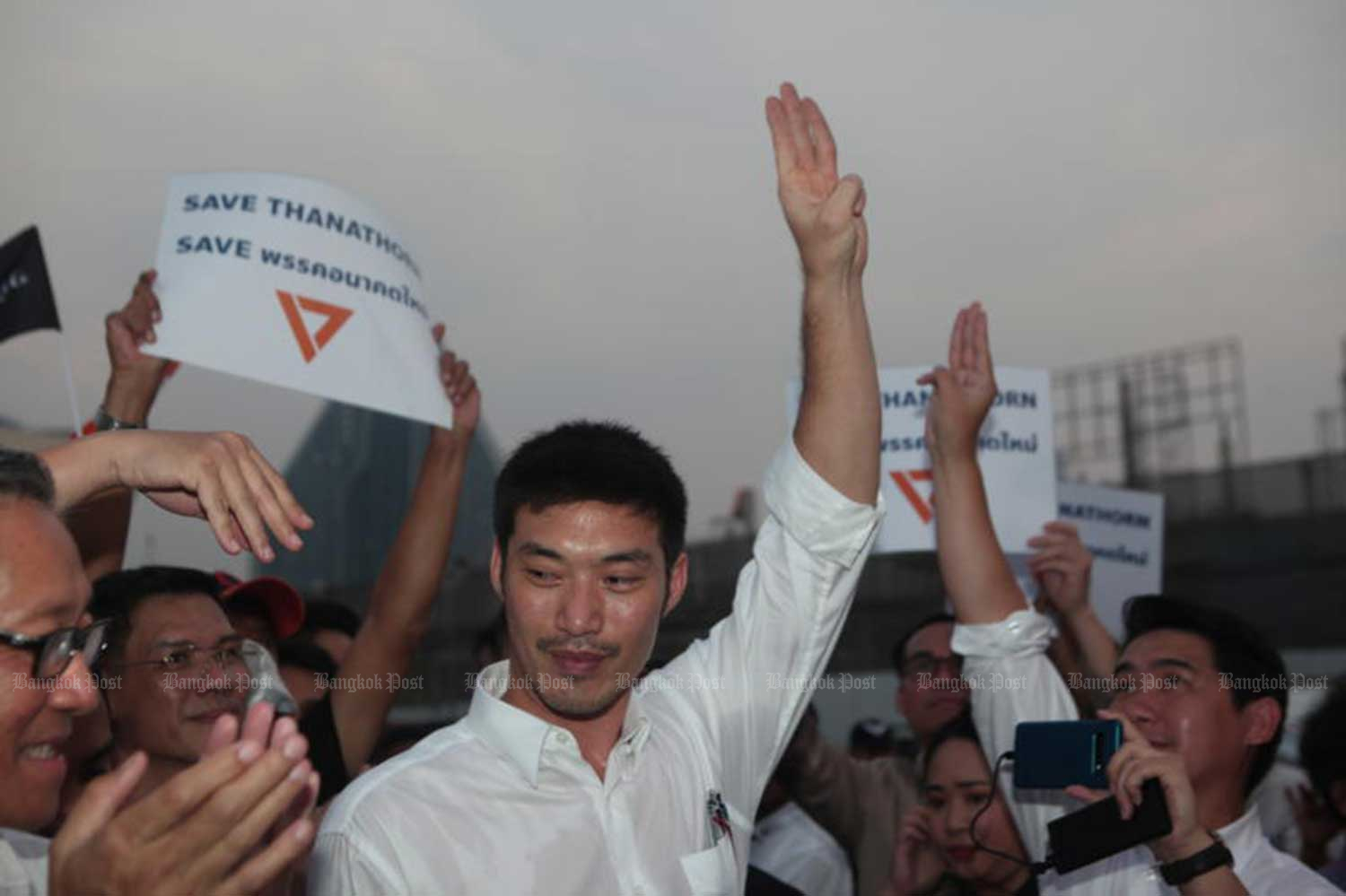 Future Forward had denied the allegations, describing them as part of a crackdown on dissent by the royalist establishment after a disputed March election that ended five years of direct military rule.

His Majesty King Maha Vajiralongkorn, 67, is a constitutional monarch, but in traditional Thai culture, the monarch is revered as the country's protector and insulting the king is a criminal offence punishable by up to 15 years in prison. Seeking to abolish the monarchy is considered a grave offence.

Founded almost two years ago, the FFP came third in last year's general election, which the opposition says was manipulated in favour of the pro-military Palang Pracharat Party.

Its leader Thanathorn Juangroongruangkit, 41, has emerged as the most prominent opponent to the government that last year reinstalled former junta leader Prayut Chan-o-cha, 65, as a civilian prime minister five years after he staged a military coup.

One of the claims in the petition before the court was that Future Forward’s logo evoked the secret Illuminati sect “believed to be behind the unseating of monarchies in Europe.” The term “Illuminati” traces back hundreds of years and has become a watchword for discredited conspiracy theories about secretive groups trying to control world affairs.

The Illuminati case was filed against the Future Forward Party, leader Thanathorn Juangroongruangkit, secretary-general Piyabutr Saengkanokkul and party executives in July 2019 by Nathaporn Toprayoon, a former adviser to the Ombudsman.

Section 49 of the constitution allows an individual to file a petition with the Constitutional Court if he or she believes rights and freedoms have been misused to topple democracy with the king as head of state. The court can then order a stop to such actions. However, the court is not empowered to dissolve a party based on a petition by an individual - such a request can come only from the Election Commission (EC).Among the key evidence Mr Nathaporn submitted to the court was a party regulation that does not use the standard phrase "democracy with the king as head of state", but instead uses the words "democracy according to the constitution".

Another piece of evidence was a party policy that would have Thailand ratify the jurisdiction of the International Criminal Court, a body that does not grant immunity to the head of state, which is against the Thai constitution.

The evidence also included the party's logo, which he claimed resembled that of the Illuminati, a mythical organisation that conspiracy theorists believe pulls strings on behalf of shadowy forces all over the world.

Other evidence comprised speeches, academic work and articles by Mr Thanathorn and Mr Piyabutr in separate instances over several years, which he used to support his claim about their intentions.

After the case was filed, FFP asked the court in writing for an examination of witnesses and the right to submit its own evidence. The court denied the request, saying it already had enough for a ruling.

Section 92 of the Political Parties Act provides that when the Constitutional Court dissolves a party, the right of its executives to run as candidates in an election shall be revoked, but it does not set the timeframe.

In the latest case involving the disbandment of the Thai Raksa Chart Party early in 2019, the Constitutional Court banned its executives from politics for 10 years.

The banned executives also cannot register to set up new parties, become executives of another party, or take part in setting one up for 10 years. The penalty is a jail term of 7-15 years and/or a fine of 140,000-300,000 baht.

Since MPs are required to be members of parties under Section 101(10) of the Constitution, an MP of a disbanded party must join another within 60 days - or lose his or her MP status.

If FFP were dissolved, its MPs would have two options. They could join other parties, whether or not they are already represented in parliament. They could also join a new party yet to be set up, which might take time and carries some risk.

According to regulations, a new party must be formed by at least 500 people and have seed funding of at least 1 million baht. They must hold a meeting to set regulations and elect executives before applying to the EC.

Since no time limit is set for the EC to approve a party's registration, it has sole discretion in deciding when the new party can become operational. And if it takes a longer than 60 days, the stranded MPs would all lose their parliamentary status - or be forced to join an existing party before the deadline.

If FFP were disbanded, its 11 executives, including Mr Piyabutr and spokesperson Pannika Wanich - Mr Thanathorn has already been disqualified in a media-shareholding case - would lose their MP status, leaving the party with 69 MPs.

Former election commissioner Somchai Srisutthiyakorn suggested how the party could minimise the damage. Future Forward's executives could resign before the court hands down the ruling, he suggested, so the next candidates on its party list could move up to replace them.

But if the court then did not dissolve the party, these key people would be surrendering their MP roles -- and the party would end up with fewer seats.

As of Jan 20, there were no signs the 11 FFP executives would quit voluntarily.

FFP's possible disbandment would take a toll on the opposition ahead of the crucial no-confidence debate in the prime minister and several other ministers because the bloc would lose the support of at least 11 MPs of the FFP.

By-elections would be held to replace the FFP's executives who are constituency MPs. But it remains unclear whether the next candidates on the FFP's list will be allowed to move up to replace the banned party-list executives, since the party would already have been disbanded.

Under this scenario, the opposition bloc would lose at least 10 seats.

There would also be a risk that some FFP MPs might cross the aisle to join the coalition even though Mr Piyabutr encouraged them all to go to "a new home".