Armed police escort Prasittichai Khaokaew, who admits shooting and killing people during a gold shop robbery on Jan 9, at the Crime Suppression Division in Bangkok on Thursday. (Police photo)

The school headmaster who admits robbing a gold shop in Lop Buri province and shooting seven people said he did not mean to kill the two-year-old boy or a woman employee, but police will press charges of premeditated murder.

Prasittichai Khaokaew, 38, answered reporters' questions via an audio link to a press conference at the Royal Thai Police headquarters in Bangkok.

He said he intended to shoot a security guard at the Robinson department store in Lop Buri province where he robbed gold shop, and the bullet hit the boy by accident.

"I ...(pause)... did not see the child. I shot the security guard to clear the way. I didn't mean to shoot the child. I regret that," Mr Prasittichai said from Crime Suppression Division head office. 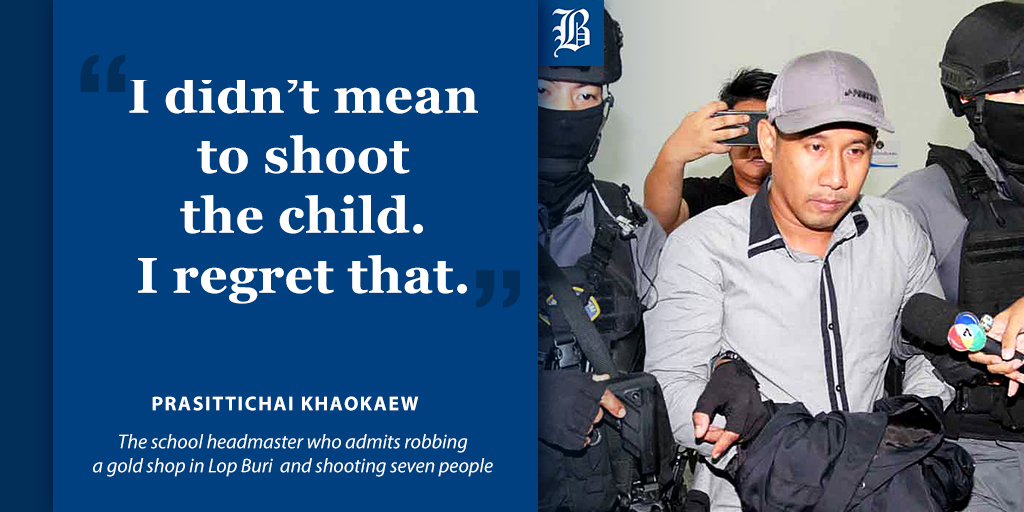 Two-year-old Titan was killed as he walked past the Aurora gold shop with his mother when the robber stormed up to the display counter about 8.44pm on Jan 9.

Security camera footage shows the robber shooting at gold shop staff and customers. A woman employee was also killed and he shot dead a security guard as he escaped .

He claimed that his gloved finger stuck on the trigger of his gun, and caused him to accidentally shoot dead the gold shop employee.

After he shot the woman his instinct told him to continue shooting at the customers, and he regretted that,  the headmaster of Wat Pho Chai School in Sing Buri province said.

The suspect also said that he bought the sound suppressor attached to his pistol from a young friend he knew on the net.

"I wanted to soften the noise because I did not want to frighten people," Mr Prasittichai said.

Although he used his father's gun and his father-in-law's motorcycle during the crime, he was adamant that he acted alone. He had intended to surrender on Friday, after finishing some work he had to do for his pupils, the suspect said. Instead, police arrested him in Lop Buri as he drove to work on Wednesday morning.

Repeatedly asked about the motive for the crime, Mr Prasittichai said he had personal and financial problems. He refused to elaborate, and asked national police chief Pol Gen Chakthip Chaijinda to end the question and answer session. The line was then disconnected.

Deputy national police chief Pol Gen Suwat Chaengyodsuk told reporters during the press conference  that the suspect could say anything he wanted to, and change his story at any stage. Police, however,  would base their charges firmly on the suspect's actions and the evidence against him.

"I assure you that it is premeditated murder aimed at obtaining valuables. He carried a gun there, shot people, got the gold and hid it... The suspect can always change his story. Don't believe everything he says," Pol Gen Suwat said.

The deputy national police chief also said that a lead from an informant led to the suspect's arrest. Police had not found any evidence there was any other person involved.

Charges against the suspect included murder, robbery and using a weapon in public, and the suspect admitted to all charges, according to Pol Gen Suwat.

Police had earlier planned to take the suspect to the press conference and he was taken out of the CSD offices, as if on the way, and then returned inside for the phone call instead.

Police said the suspect would be flown back to Lop Buri for a crime re-enactment at the Robinson department store.

However, the re-enactment was cancelled and Mr Prasittichai was instead taken to the Criminal Court, where police applied for court approval to detain him for another 12 days. There was no suggestion of bail.

DUBAI: Iran has asked Indonesia to provide details about the seizure of an Iranian-flagged vessel, Iranian Foreign Ministry spokesman Saeed Khatibzadeh said on Monday, a day after Jakarta said it had seized Iran and Panama-flagged tankers in its waters.