An official uses a thermal camera at the arrivals hall of Suvarnabhumi airport on Friday as a measure to prevent the spread of coronavirus in Bangkok. (Reuters photo)

The Public Health Ministry on Friday confirmed the fifth case of a Sars-like coronavirus in Thailand but assured that all necessary precautionary measures had been taken to prevent the disease from spreading.

Speaking after visiting the female patient at Rajavithi Hospital in Bangkok, Deputy Public Health Minister Sathit Pitutecha said the latest case is a 33-year-old Chinese woman who travelled from Wuhan, the source of the outbreak.

According to Mr Sathit, she arrived in Thailand on Jan 21, just before Wuhan was locked down, and checked herself in at Rajavithi Hospital on Jan 23 after developing a fever and cough. Doctors suspected coronavirus and two lab tests confirmed she had contracted the virus, officially known as 2019-nCoV.

He said the patient's condition was improving but doctors were also monitoring the health of her seven-year-old daughter who accompanied her to Thailand.

Mr Sathit said the discovery of the latest case indicated that measures, including checking incoming passengers at airports and handing out health guidelines, were effective.

"She came to the hospital after reading a health advisory given to passengers from at-risk areas," he said.

Of the country's five confirmed cases, four are Chinese nationals and one is Thai. All five had either visited and/or lived in Wuhan recently. 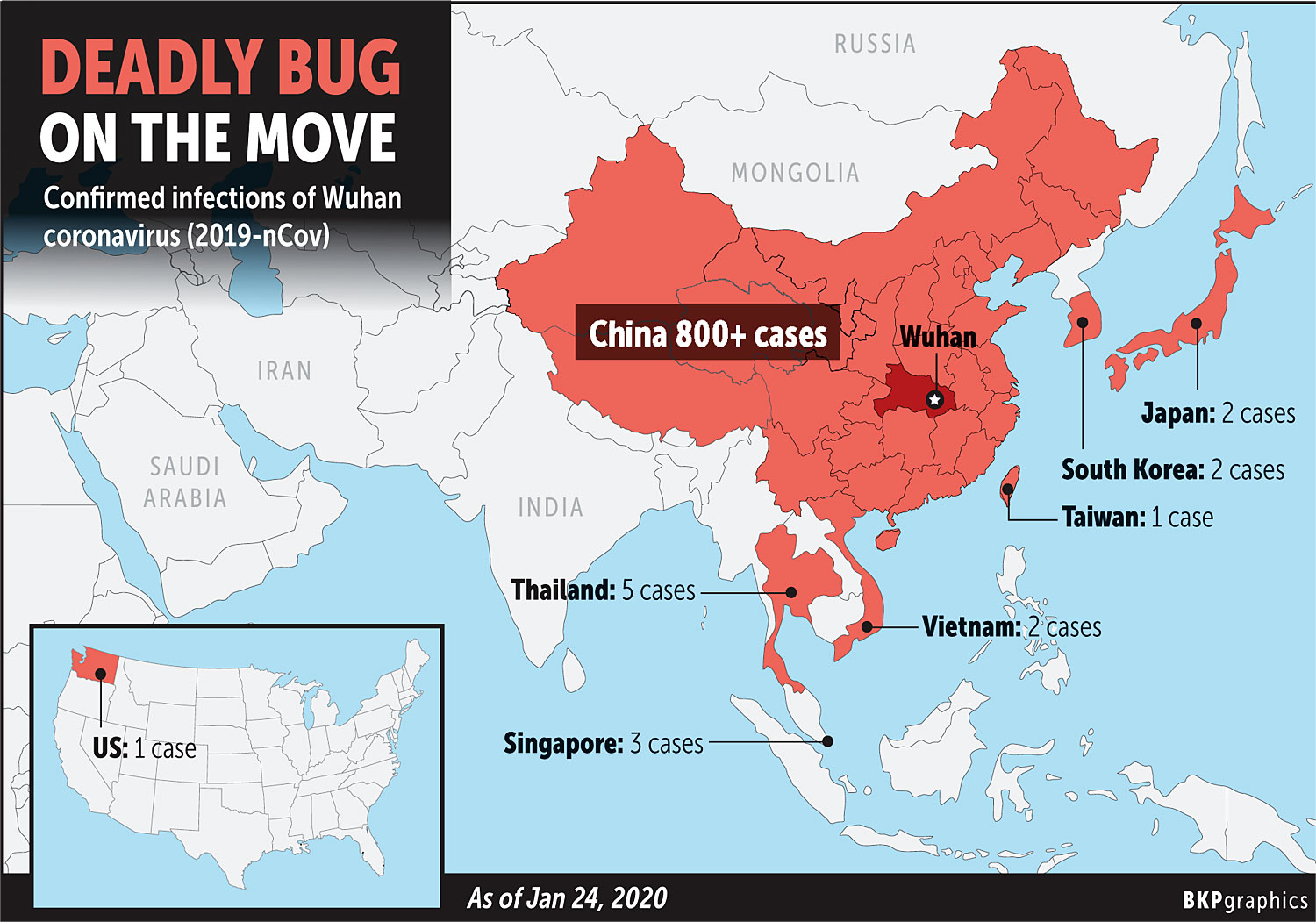 The first case, a 61-year-old female tourist from China, was confirmed on Jan 13. On Jan 17, a 74-year-old Chinese woman also tested positive for the virus. On Jan 22 test results for a 68-year-old Chinese man who displayed symptoms also came back positive.

The fourth case is a 73-year-old Thai woman who is being treated at a hospital in Nakhon Pathom.

Dr Thana Khawcharoenporn, an infectious disease specialist, stressed the need to monitor the outbreak closely since it was not yet clear how infectious the virus is. However, Thailand is well-prepared to cope with the outbreak, saying a good indication was that patients discovered so far had all travelled from Wuhan.

The Kasikorn Research Centre (KRC) said the lockdown of Wuhan shortly ahead of Chinese New Year would only slightly affect the number of Chinese tourists in Thailand, with the forecast clipped from 366,000 to 355,000-358,000.

Meanwhile, Vichit Prakobgosol, president of the Association of Thai Travel Agents, assessed the consequences after the Chinese government told local tour operators to stop leading tour groups abroad, saying that Thailand will lose around 50 billion baht from the 1.2-1.3 million Chinese travellers who will not visit the country over the next two months.

"Among the 900,000 Chinese travellers who visit Thailand each month, 50% come with tour groups which are directly affected by the recent order from the government. Although independent travellers are excluded from the prohibition, some of them must be worried and may decide not to travel as well," he said.

Tourism Authority of Thailand governor Yuthasak Supasorn admitted any marketing campaigns targeting Chinese tourists now would be fruitless given the Chinese government's severe restrictions on travellers to prevent the deadly coronavirus from spreading.