Army to cede schemes to professionals

Army chief Gen Apirat Kongsompong said the army will sign a memorandum of understanding with the Finance Ministry to ensure sound management of its commercial and welfare schemes. (Bangkok Post file photo)

Following his promise to bring transparency to the barracks, army commander Apirat Kongsompong said on Wednesday the army will sign a memorandum of understanding with the Finance Ministry to ensure sound management of its commercial and welfare schemes.

He said the implementation will be divided into phases with army-run golf courses, boxing stadiums and the Suan Son Pradipat Army Rehabilitation and Recreation Centre in Prachuap Khiri Khan being the first to come under the Finance Ministry's oversight.

According to the army chief, these businesses -- which were originally introduced as part of a welfare scheme for army personnel -- will be managed by professionals from the private sector.

"We will use professionals rather than our own people [to run the businesses] -- but our personnel will work alongside them," he said.

The signing of the MoU is expected to take place on Feb 17. The management of Suan Son Pradipat Army Rehabilitation and Recreation Centre will be handled by a private firm starting in April.

Gen Apirat insisted he would make good on his promises to bring transparency and accountability to the barracks in the wake of a mass shooting at the weekend in which a personal conflict between the soldier-shooter and his superior was blamed.

"When there is something bad going on, I admit and deal with it. I don't just talk, I walk the walk," he said.

According to an army source, the planned MoU is expected to cover internal welfare and commercial schemes, as well as the use of army land, which is leased to it by the Treasury Department. The source said the army has more than 30 golf courses nationwide, but not a single one of them makes any profit.

The golf courses were originally part of a recreational and welfare scheme for army personnel only, but the scheme has become partly commercialised after the public was allowed to use them. 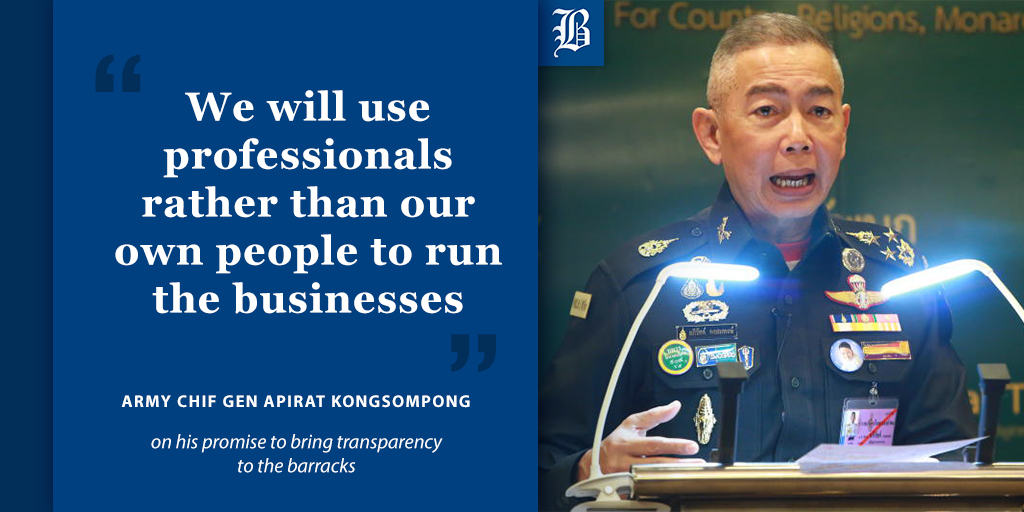 Since convenience stores and coffee shops located at the army's headquarters and Region 1 are managed under the Finance Ministry's regulations on use of state-owned land, rent paid by the stores and shops will in future be split between the army and the department, instead of going only to the army as is now the practice.

Meanwhile, Future Forward Party leader Thanathorn Juangroongruangkit yesterday called on the army to stop engaging in any commercial operations if it wanted to truly reform itself.

Mr Thanathorn, a vocal critic of the military, said the army's income from private business operations, known as off-budget funds, is not returned to the state's coffers so its spending is not scrutinised or regulated. "I want Gen Apirat's reforms to succeed. He should start by improving transparency," he said.