3,400 rai of forest destroyed by blaze

A firefighter walks in a damaged forest on Phu Kradueng National Park on Monday. (Photo from Phu Kradueng Facebook account)

A bushfire in Loei's famous Phu Kradueng National Park was finally brought under control on Monday morning, after destroying about 3,400 rai of forest.

The fire was first reported at 8.30am on Sunday and raged for 18 hours before being brought under control at about 2am on Monday, Department of National Parks, Wildlife and Plant Conservation director-general, Thanya Netithammakun, announced.

According to Mr Thanya, the fire began at the foot of a hill and rapidly spread up the mountain, fuelled by latex in the rubber sap.

"Strong winds also helped fan the blaze. The tough terrain made extinguishing the fire especially difficult, as some areas were completely inaccessible," said Mr Thanya, who said the wildfire was "the worst fire in 17 years".

It took 130 people — including local officials, villagers and even tourists — to bring it under control, according to Mr Thanya.

"Luckily, the fire was subdued before it spread to ecologically sensitive areas," he said. 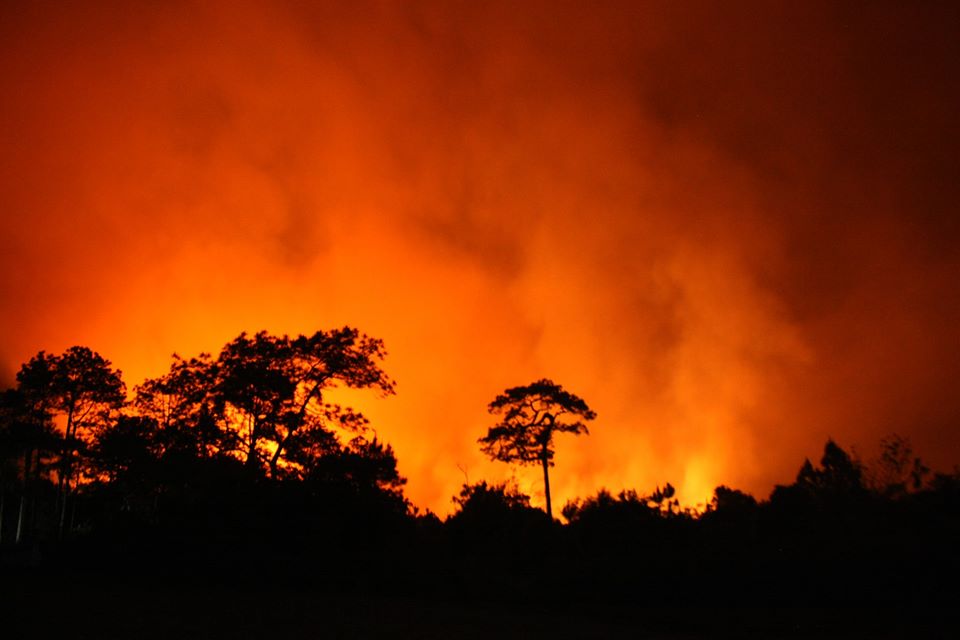 A fire rips through Phu Kradueng from Sunday morning to early hours of Monday. (Photo from Phu Kradueng Facebook account)

Sombat Pimprasit, head of Phu Kradueng National Park, said the forest fire is estimated to have damaged some 3,400 rai of pine forest and prairie grasslands, out of a total park area of 44,325 rai.

"Despite its severity, we were lucky it only damaged the outer rim of the national park," he said.

"Luckily, the inner core of the national park, where wildlife such as chamois, tigers and elephants live and wild plants are concentrated, were not disturbed."

While the fires have been subdued, Mr Sombat said there is a high risk of another blaze breaking out because of the dry weather.

At present, local officials, along with villagers and volunteers are rushing to create a two-kilometre buffer zone around the foothills of the mountains, in order to prevent new fires from spreading to ecologically sensitive areas in the park.

Mr Sombat said that he suspected the fire was started deliberately and accused some villagers of setting fire to the forest to help them collect wild animals and plants in the forest.

The park chief insisted that the park remains open to the public.

Phu Kradueng National Park is one of the most important national parks in the country, because of its unique ecology which encompasses a wide variety of different habitats within a relatively small area, which ranges from pine forests to grasslands.

Acts of arson have damaged numerous ecologically sensitive areas in the country, and Phu Kradueng is not the only victim.

Last week, about 13 rai of forest in Doi Pha Mueang Wildlife Sanctuary in Lampang was damaged by fire in a single day.