B100bn stimulus gets the nod
Business

B100bn stimulus gets the nod

A pack of four sanitary face masks is shown by a buyer from a mobile outlet at Klong Toey market, one of 21 spots in Bangkok where the Internal Trade Department is selling masks to relieve shortages caused by the Covid-19 outbreak. The 10-baht packs are limited to one per customer. (Photo by Arnun Chonmahatrakool)

The government has approved a stimulus package, expected to cost more than 100 billion baht, to ease the impact of Covid-19 on the country's already tepid economy.

The package was approved in a meeting of economic ministers led by Prime Minister Prayut Chan-o-cha yesterday and will be forwarded to the cabinet for endorsement on Tuesday.

After the meeting, Gen Prayut said this package, lasting two months, will be temporary assistance. It includes a wide range of measures such as financial aid for small-and-medium-sized entrepreneurs (SMEs), tax benefits and other financial policies, he said.

This 100-billion-baht plus package comes at a time when the economy is slumping further. It has already been in the doldrums for several years due to weakening exports and low investment, while the Covid-19 outbreak is rubbing more salt in the wound as it is directly hitting the tourism sector, which is considered the only remaining lifeline for the economy.

Deputy Prime Minister Somkid Jatusripitak admitted that the virus has dealt a severe blow to tourism as well as the manufacturing and services sectors.

The Bank of Thailand has been working with other relevant agencies to roll out the first set of measures to different groups, he said. 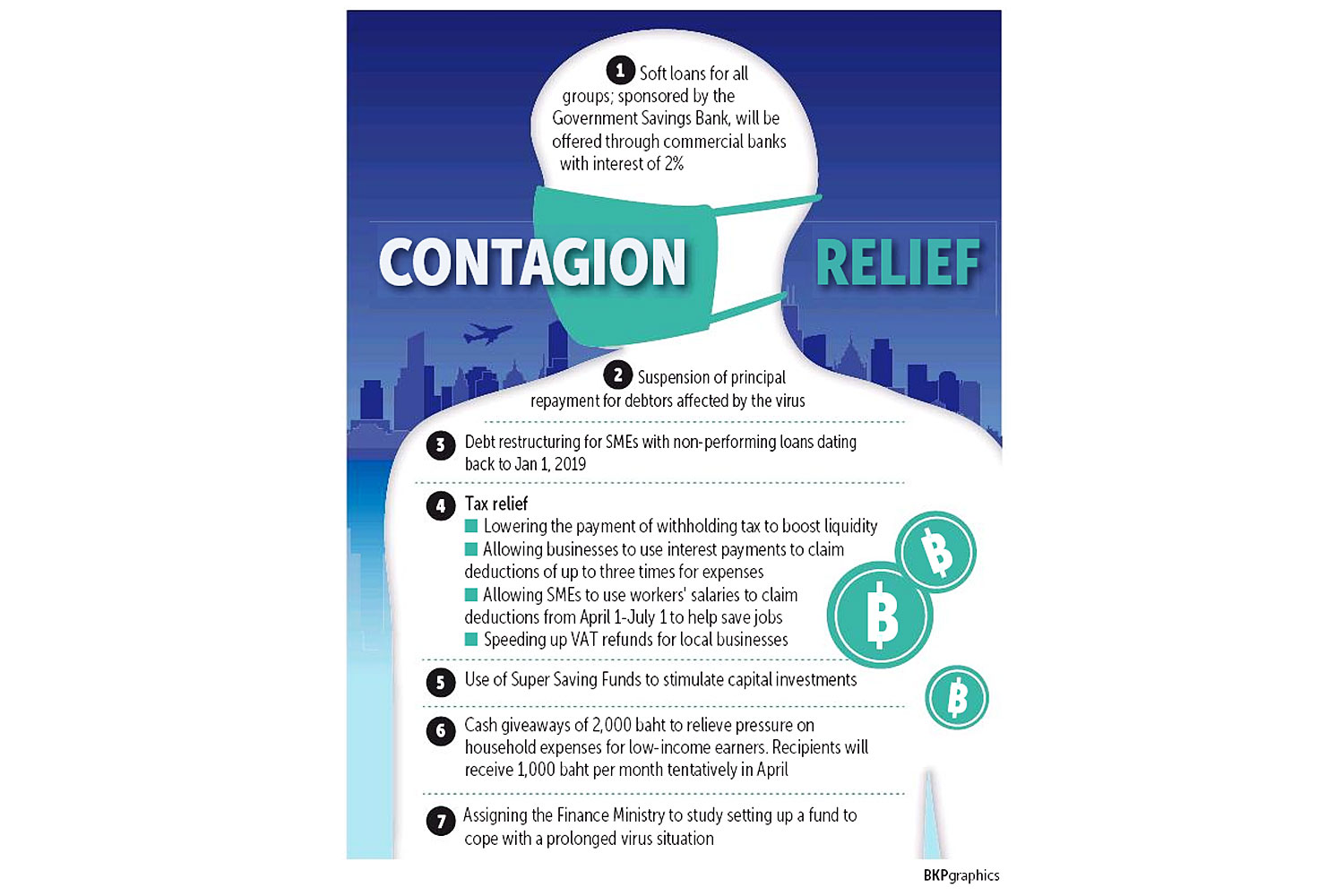 "It is particularly important to help SMEs to prevent further impacts on workers. This is the first set of measures, and there will be more later," Mr Somkid told the media.

Finance Minister Uttama Savanayana said the package includes cash handouts, soft loans and other financial assistance, as well as tax benefits, to help both entrepreneurs and members of the public.

"It's a temporary, broad-based package to help various sectors," he said.

In the business sector, the package will provide soft loans at a 2% interest rate, a debt moratorium and delayed debt repayment, debt restructuring for non-performing loans, lower utility expenses and other costs, Mr Uttama said.

In addition to this, the package will cover a 2,000-baht handout each to low-income earners, farmers and freelance workers at 1,000 baht over two months.

In a move to restore confidence in the capital market, the government will invest more than 65% of the Super Savings Fund (SSF) in companies listed on the Stock Exchange of Thailand, and will offer higher tax benefits to attract more public investments in the SSF.

Bank of Thailand governor, Veerathai Santiprabhob, said the central bank has issued a memo calling on commercial banks to ease debt-restructuring criteria under the relief package.

The central bank has also called on commercial banks to lower the minimum payment limit for credit-card holders to 5% from the 10% ceiling.

Kobsak Pootrakool, secretary to the economic cabinet, said the ministers are also prepared to roll out measures to help airlines and retailers who are renting airport space.

He said the ministers discussed the economic outlook and estimate that the effect of the Covid-19 outbreak will persist for another six months, but an additional three months will be needed to restore public confidence.

He also said that the economy's performance in the first quarter will not be positive because the outbreak has slashed the number of foreign arrivals by 50% so far.

Economy growth stood at just 2.4% last year, the weakest in five years. Growth this year is likely to be much lower, with Kasikorn Research Centre predicting GDP expansion of just 0.5% mainly because of the Covid-19 outbreak.

Yet, despite all these benefits up for the taking, the government's stimulus package has not been well received.

Many social-media users questioned the government's frequent use of financial packages and its choice of priorities.

While some suggest prioritising the procurement of necessary medical supplies for public health staff, others are asking: "What use will 100 billion baht in cash do?"