Widespread transmission will slow down until the number of infected cases per week peaks between January and February next year. At least 400,000 people will be diagnosed with Covid-19 this year and next, with the peak period expected to be during the next cool season, according to Sophon Iamsirithavorn, chief of the Communicable Disease Division. 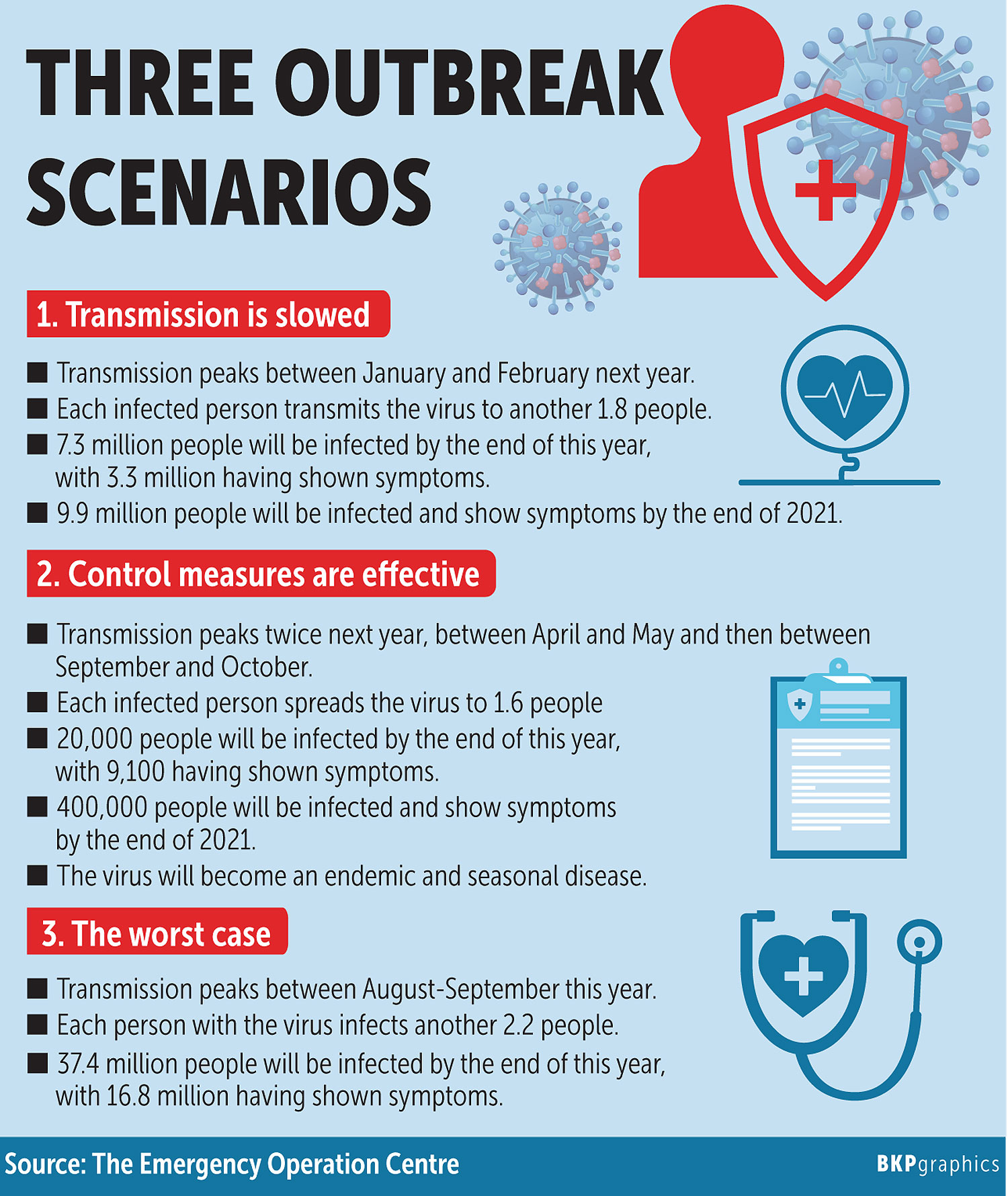 "Going by this forecast, we are confident that the outbreak can be kept under control and medical treatment will be manageable. We don't expect infections to exceed one million as long as we have close cooperation from the public," he said.

The first, and best case, scenario forecast by the division is based on an assumption that one patient will transmit the disease to 1.6 new patients which would result in 400,000 new cases by the end of next year, according to Dr Sophon. In this case, the virus would ultimately settle down to become endemic and a seasonal disease like the flu.

However, Dr Sophon stressed that this assumes that state measures designed to prevent people coming into contact with the virus, such as bans on large gatherings of people and putting those from virus-hit areas in quarantine, prove effective.

A second estimate putting the rate of transmission at 1.8 would see Thailand struck by 9.9 million cases by the end of 2020.

Widespread transmission would slow down until the number of infected cases per week peaks between January and February next year.

A third, unlikely, scenario would see measures to control the spread of the virus prove ineffective resulting in rapid transmission at a rate of 2.2 new cases per infection with 37.4 million cases of Covid-19 in Thailand diagnosed over the same period. Dr Sophon, however, believes the country's efforts to control the spread of the disease make this estimate more of a worst-case scenario than a realistic projection.

In each instance, the expected number of critical cases is 5% with a death rate of less than 2%.

Dr Sophon was referring to a March 8 report by the Emergency Operation Centre, also under the Department of Disease Control using statistics compiled from global data since the beginning of the outbreak.

The study also noted that only 45% of those diagnosed with Covid-19 on the Diamond cruise ship went on to show symptoms and needed treatment.