The seven swimmers, with actor-singer Phakhin "Tono" Khamwilaisak fourth from left, pose for a group photo before beginning their swim for the One Man & the Sea campaign to raise environmental awareness in Surat Thani province. (Photo by Supapong Chaolan)

SURAT THANI: Seven swimmers, including actor and singer Phakhin "Tono" Khamwilaisak, have begun an 82-kilometre ocean swim over 18 days to increase public awareness of the environment and the need to conserve the marine ecosystem.

They are also raising money to buy equipment for hospitals treating rare marine animals. The campaign has a Facebook page, "Kebruk".  Donations can be made via Siam Commercial Bank or by SMS.

Marine and Coastal Resources Department  director-general Sophon Thongdee and Surat Thani governor Witchawut Jinto presided over the launch of the “One Man & the Sea’’ campaign at a pier in Don Sak district of Surat Thani province on Thursday.

The seven swimmers will stroke their way from the pier to Koh Samui, staging at 12 islands, for a distance of 82 kilometres over 18 days, completing the marathon on April 5.

The campaign is aimed at raising public awareness about the significance of the marine ecosystem and the need to stop the dumping of garbage into the seas.

The seven-member team, who are accompanied by a coach, swam to Koh Likan, a distance of 1.6 kilometres, on Thursday morning. It took them about 30 minutes.

In the afternoon they were to swim to Koh Nok Phao, another 6.4 kilometres, and overnight on the island, having completed a total of 8 kilometres.

On the first day of the campaign, donations quickly reached 1.3 million baht.

Before entering the water, 33-year-old "Tono" said he was excited to see pink dolphins swimming near Don Sak pier.

Almost 100 celebrities had earlier shown interest in taking part. The mass swim was cancelled due to the spread of the coronavirus, he said. 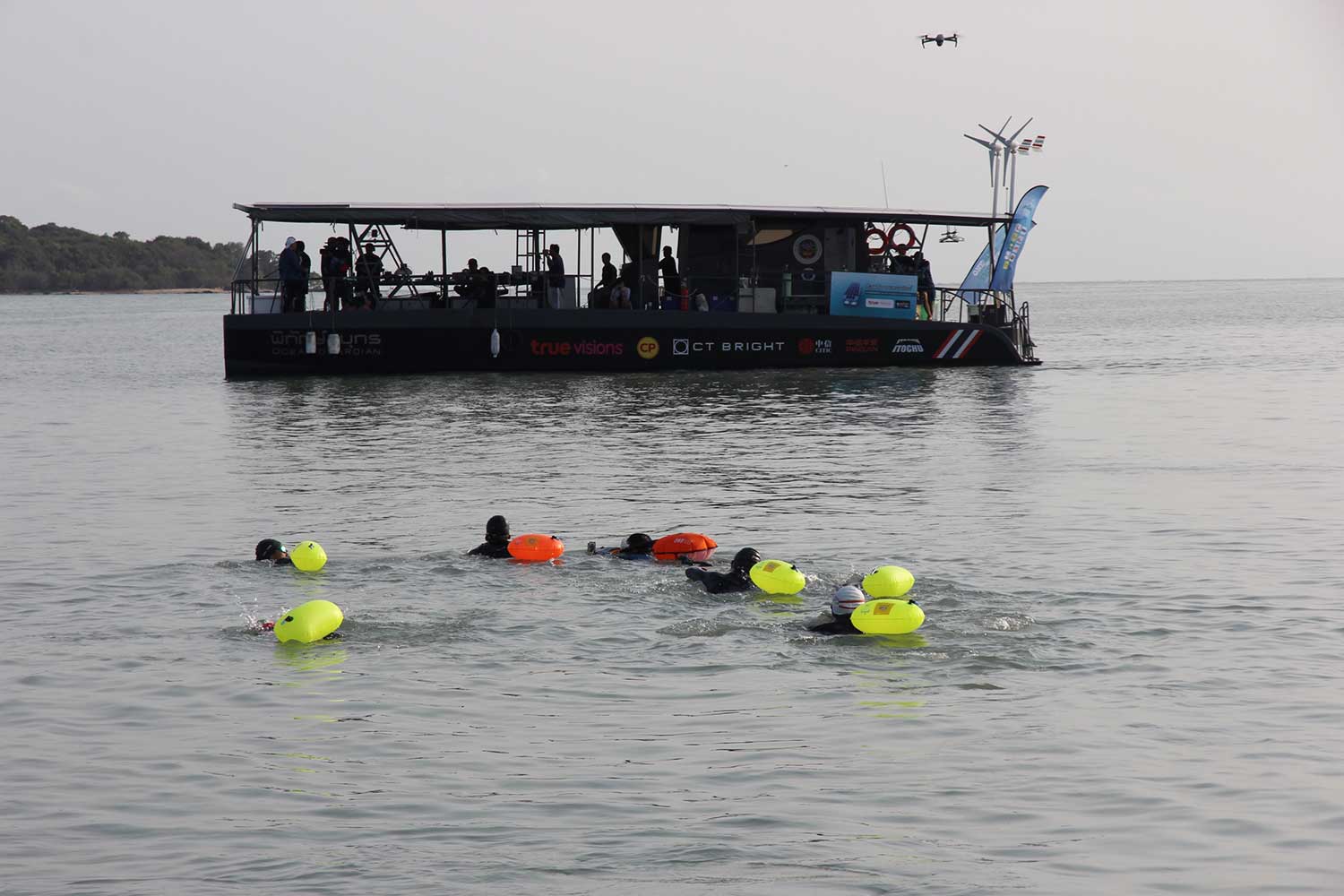 The seven swimmers set out from Don Sak pier in Surat Thani provionce on Thursday, heading to Koh Likan, the first stop on their 18-day swim to Koh Samui to raise public awareness of the need to preserve the marine ecosystem.  (Photo: Supapong Chaolan)