Long lines of vehicles stretch along Vibhavadi Rangsit Road after City Hall set up additional checkpoints to screen people travelling into the city.

Though the partial lockdown has turned people's lives upside down, it is gaining traction with the public as the government scrambles to control the spread of Covid-19.

The Emergency Decree was applied nationwide from March 26, banning the entry of foreigners, prohibiting public gatherings and urging people to stay at home. The decree came after Bangkok was put under partial lockdown on March 22 and 26 types of businesses were closed until April 12.

Kannika Rachjareon, a freelance comic artist, said the Emergency Decree may make things difficult initially, but people have to sacrifice their freedom to bring the outbreak under control.

"I normally meet customers face to face every week, but now I am meeting them online. I've also had to stock up on food, not out of panic but because I worry that leaving the house often can increase the risk of being infected or transmitting the virus to others," she told the Bangkok Post.

Ms Kannika, who launched the "Support Our Heroes" online campaign to give moral support to medical personnel, called on people to see "a window of opportunity" under the partial lockdown.

"For me, working from home saves time and transport cost. I can work on expanding my professional network and can teach art online," she said. 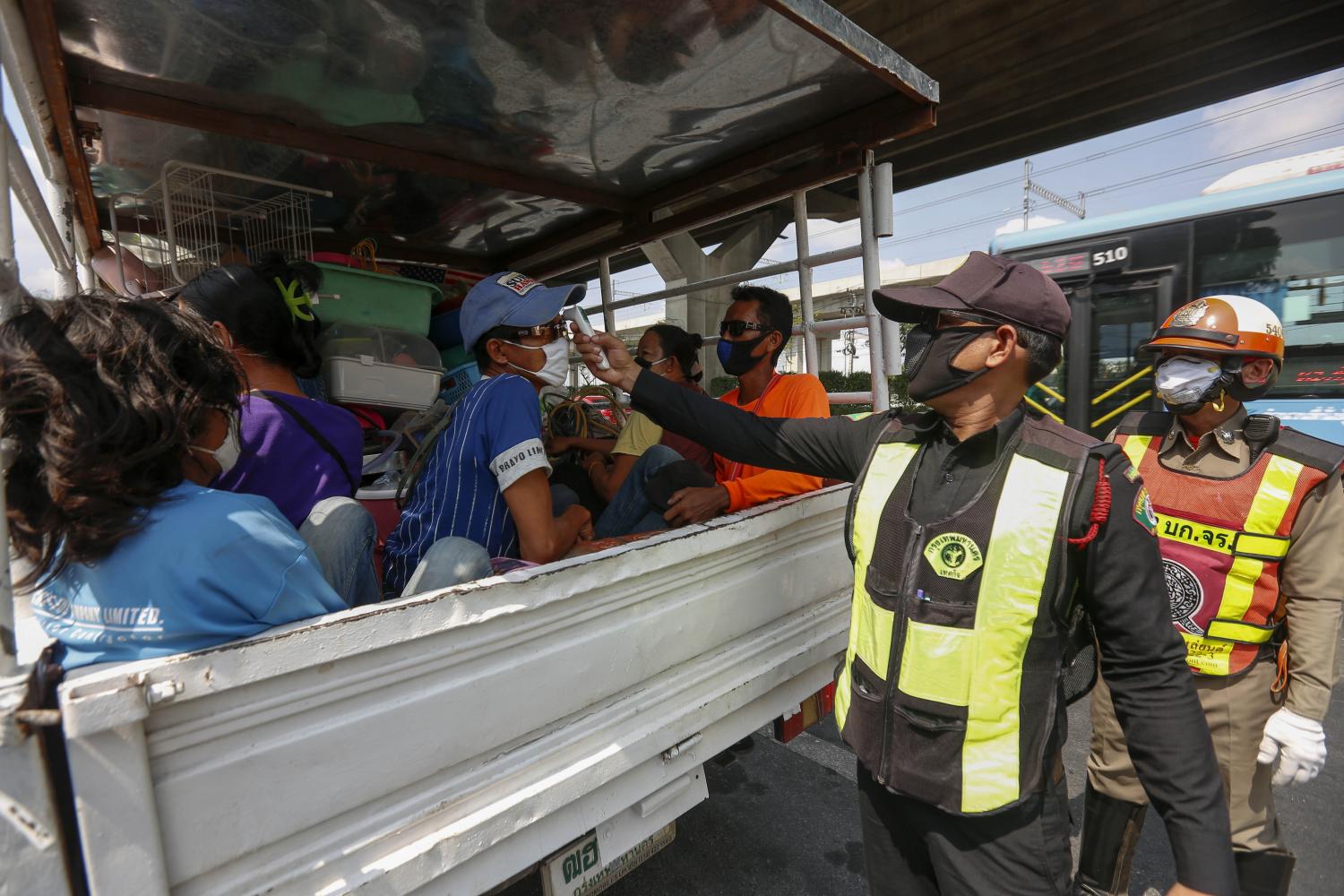 Officials check the temperature of migrant workers at a checkpoint in front of Don Mueang airport's Cargo Terminal on the inbound Vibhavadi Rangsit Road. photos by Pattarapong Chatpattarasill

Similarly, Panod Srisinsuphya, a television reporter, fully supports the Emergency Decree even though it has changed his working style. "Working from home can be distracting because all of my family is at home. It is also daunting to report news and edit videos online [instead of in the field]. Since some of my colleagues are in self-isolation, I have to go to the newsroom and broadcast live on their behalf. It is sad but true that during crises, people consume more news. So, we have to work harder during the outbreak," he said.

Patcharin Dhanakornpipattanakul, an office worker, also urged people to stay at home to avoid increasing the already heavy burden on overworked medical staff. "The only inconvenience is that most restaurants are closed. I only leave home to buy food because my family has not stocked up," she said.

The Emergency Decree has hit lives in other provinces as well. Papon Muangsanit, a biomedical engineering PhD student in the United Kingdom who is now self-isolating at home in Sakon Nakhon, said the Emergency Decree will urge the public to take quarantine and other measures more seriously.

"I fully support the idea even though it will have an adverse impact on my life once I have completed the two-week self-isolation period. I won't be able to hang out with my friends. I will scrap a plan to visit Bangkok [the epicentre of the outbreak] because I don't want to pass a lot of checkpoints and self-isolate again upon returning," he said.

Now that he can't leave home, Mr Papon said he is taking online courses on machine learning and data analysis and is also writing articles. "As soon as the outbreaks in the UK and Thailand improve, I can fly back to take my exams, graduate and return to work here. If not, the university may consider conducting oral exams online," he said.

Kanchana Tungphithakphong, a tour guide in Chiang Rai, said it is not the Emergency Decree, but the outbreak that has left her and her husband temporarily unemployed since late February. "All my group tours from China, Belgium, and Holland have been cancelled. I worry that freelance workers like me don't have social security. I have been looking into learning yoga and making masks, but the Emergency Decree bans gatherings. Now, all I can do is plant vegetables," she said.

Komsant Tumlangka, a car worker in Pathum Thani, said his company has yet to issue a work-from-home order, but has already put in place stringent measures.

"Staff are required to take their temperature, use hand sanitisers, and wear face masks. We have to practise social-distancing at lunch and report our whereabouts before and after work to ensure we are not in high-risk areas," he said.

Patinya Mungkung, an office worker in Nakhon Pathom, said she will comply with the government's measures and only go out to buy food.

"The virus is creeping closer and I don't want to go out and use the coronavirus insurance," she said.