Documents given to police by 15 construction workers as evidence their company had a good reason for them to travel during the curfew are torn. Police later say they were not usable anyway because no officials had approved it. (Photo from Ploichanok Sirowet Facebook)

Three weeks after the state of emergency was declared, the number of controversial cases involving violations has risen, mainly regarding food handouts and curfew violations.

In the latest case, police caught 15 construction workers on a pickup truck at a checkpoint on kilometre 8 of Bang Na-Trat Highway in Samut Prakan at 11.50pm on Monday.

They were workers of a construction company contracted to pave concrete at the car park of a Yellow Line mass transit station in Bang Na.

They claimed to have been working overtime and were heading home to their accommodation in Lum Luk Ka district, Pathum Thani province.

They showed officials a copy of their company’s letter dated on the same day, explaining that they had to work overtime because they had to finish the job.

Police decided their case did not fit any of the curfew’s permitted exceptions and they did not have permission from local authorities to be out of their homes during the curfew. They were therefore brought to a police station and then locked up in cells.

A Facebook user by the name of Ploichanok Sirowet, who claims to be the manager at the construction company, posted that the firm had earlier shown police the letter and was assured it was sufficient to get the workers through checkpoints. But when the time came the opposite was true.

“We travel on this route every day and we know a checkpoint is there. We wouldn’t have tried to go past it unless we were given a confirmation. I sympathise with the tearful workers who are still covered with dirt and dust while being locked up in cells now. Life is hard enough as it is, and yet this came. I’d like to ask for justice for such treatment,” she wrote.

Bang Kaew police later claimed the 15 copies of the document listing the names of the workers had been left on a desk at the police station. The owner of the desk, thinking they were not important, tore them to pieces and threw them into a bin.

“The fact is the workers do not have a document approved by officials. It’s just a letter from a company to officials, but authorities have not yet approved it so it’s unusable anyway,” said Pol Col Prasartporn Srisukkho, superintendent of the police station.

In another case, the เฟิร์น ปันน้ำใจ Facebook user handed out 250 servings of minced pork congee, or joke in Thai, and 50 boxes of rice with toppings near Phra Pathom Jedi in Nakhon Pathom province on Monday evening.

While people wearing masks and observing social distance queued up to receive the food, municipal officials came and seized the food. They later gave it to people in a crowded community in another place.

The officials explained to the woman about the risks and that the state of emergency decree prohibited activities that drew crowds. Besides, she did not ask authorities for approval first.

She was not prosecuted and continued to hand out free food, according to her Facebook page.

In Surat Thani, a group of foreigners led by a German man, 67, and an Austrian man, 55, were invited to the Koh Samui police station on Tuesday for talks.

They earlier handed out food and essential items to migrant workers at a construction camp on the resort island.

According to police, they uploaded a video of the activity on social media, showing people who were not wearing masks queuing to get the donations without practising social distancing. This might have misled people worldwide to think Thailand did not have in place proper Covid-19 preventive measures, tarnishing the country’s reputation.

They were also told district authorities already had measures to hand out food and items to needy people and anyone who wants to help must submit a request so that the Samui district chief can approve it and facilitate the activity.

The foreigners apologised, deleted the video clip and said they would continue with the handouts based on the guidelines.

No home to leave

In Chiang Mai, at least two homeless men were arrested and prosecuted for leaving “home” during the curfew, according to the Thai Lawyers for Human Rights (TLHR).

A man known as Tui was arrested on April 5 for breaking the curfew when he crossed Sai Vichayanon Road to use a bathroom.

He was sentenced to 15 days in jail and a 1,500-baht fine. The sentence was suspended for one year and he was ordered to stay “home” for seven days.

Another homeless man, Chart, was arrested on April 6 while walking from Tha Pae Gate to sleep in a market. He was given a suspended jail term of one month and a fine of 3,000 baht and told not to leave “home” for seven days.

Chiang Mai volunteers claimed there are 10 more cases like this involving homeless people and some were reportedly jailed, according to the TLHR.

The government declared the state of emergency, including a nationwide curfew from 10pm to 4am, on April 3. Officials acting under the decree are given immunity from prosecution or administrative action by the Administrative Court. 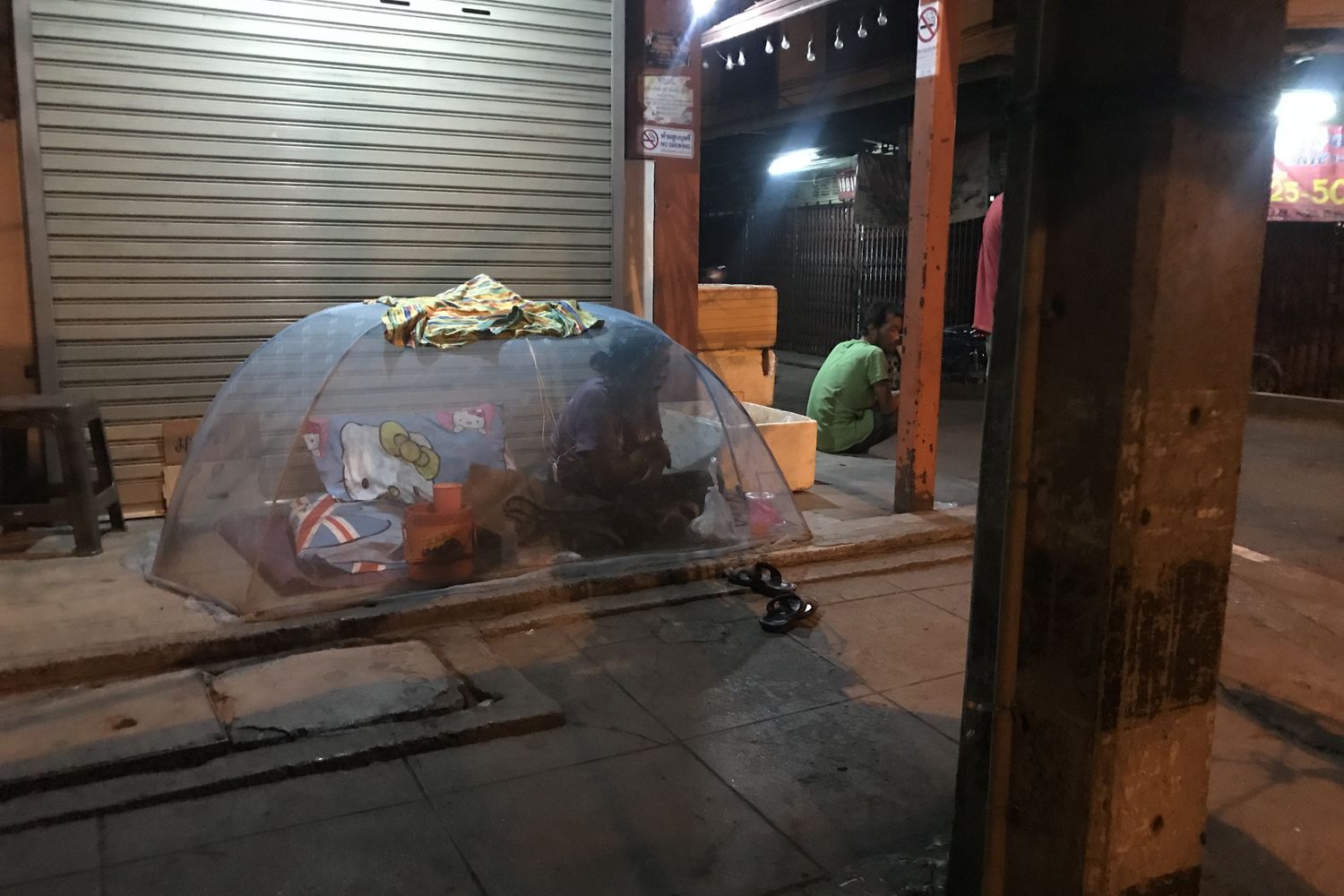 Homeless people in Chiang Mai are a vulnerable group, says the Thai Lawyers for Human Rights. (Photo by TLHR)