Pongsakorn Nurueang, right, is interrogated at Tha Sala police station on Thursday, accused of driving off in his car with a policeman clinging to the bonnet. (Photo: Nujaree Raekrun)

NAKHON SI THAMMARAT: A motorist who drove off with a traffic policeman sprawled on his car bonnet has been charged with attempted murder.

Tha Sala police on Friday pressed the charge against Pongsakorn Nurueang, 29, who was arrested at his girlfriend's parents' home in Nop Phi Tham district on Thursday.

He was also charged withj reckless driving and obstructing an officer in the execution of his duty. The chargeof attempted murder carries a maximum penalty of the death sentence. (continues below)

Mr Pongsakorn allegedly drove off from a stop with Pol Snr Sgt Maj  Montri Nitichai sprawled across the bonnet of his yellow Mitsubishi in Tha Sala town of Tha Sala district on Wednesday.

The officer had approached the car after it bumped into the rear of his stopped motorcycle.

The car carried the policeman, from Tha Sala police station,  for about two kilometres, allegedly at speeds of up to 100 kilometres per hour, before stopping to allow him to get off.

Mr Pongsakorn said the bump his car gave Pol Snr Sgt Maj Montri's motorcycle occurred as he bent down from the driver's seat to pick up his fallen mobile phone, according to Pol Maj Gen Sonthichai.

He then panicked for fear of being arrested, because he also had a bottle of illicit krathom cocktail in  his possession.

Police found the man's car parked in a mangosteen orchard at his girlfriend's parents' home when they traced and apprehended him on Thursday. 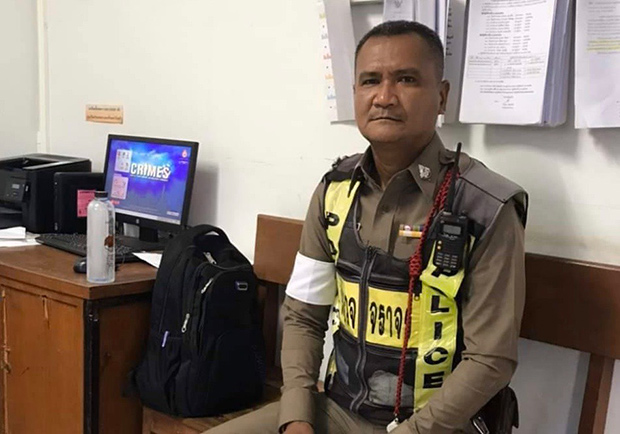 Consumer advocates submitted a petition to the Norwegian embassy in Bangkok, expressing opposition to the planned merger of True Corporation and Total Access Communication.

The House committee examining the budget bill for fiscal 2023 approved a revised spending plan in which 7.64 billion baht has been cut and reallocated, says a committee spokesman.