Motorists wait their turn to cross the bridge at Tha Chatchai and leave Phuket island for the southern mainland early on May 1, 2020. (Photo by Achadtaya Chuenniran)

The mass exodus of people exiting Phuket has renewed fears of a resurgence of Covid-19 infections after four new infections were found on the island on Sunday, prompting the government to ramp up disease control measures to screen returnees heading to their homes from the island province.

The coronavirus outbreak has forced the closure of all tourism-related businesses in Phuket, putting numerous workers out of work. Those who wanted to return to their home provinces were until recently unable to do so due to restrictions imposed on inter-provincial travel during the lockdown.

However, Phuket remains under close watch because between 10,000-20,000 people have left since the nationwide lockdown was eased on May 3, Taweesilp Visanuyothin, spokesman of the Centre for Covid-19 Situation Administration (CCSA), said on Sunday.

Phuket has the second-highest number of confirmed cases in the country, after Bangkok. On Saturday, a 28-year-old woman who worked at a shopping mall in Phuket tested positive for the virus after she returned to her home province of Prachin Buri. Four new Covid-19 cases were also reported in this southern province on Sunday.

The four new Covid-19 cases reported in Phuket take the island's tally to 224, the provincial communicable disease committee announced on Sunday. Of the 224 confirmed cases there, 191 patients have been discharged from hospital, three people died while 29 others are still receiving treatment. One patient died from injuries sustained in a motorcycle accident.

Chatchai Promlert, permanent secretary for the Interior Ministry, said that he has instructed all provincial governors and Bangkok governor to place returnees from Phuket under quarantine as a precaution.

In a similar move, Suwannachai Wattanayingcharoenchai, director-general of the Department of Disease Control of the Public Health Ministry, sent urgent letters to all provincial governors in their capacities as chairmen of provincial communicable disease committees to keep an eye out for Phuket returnees and take proper disease control measures to prevent Covid-19 transmission.

Dr Suwannachai said that more than 30,000 people registered for fit-to-travel certificates, which they needed to make the inter-provincial journey to their homes.

Dr Taweesilp also referred to fears of a possible new wave of infections in South Korea, where about 1,500 people are believed to have come into contact with infected patients who went to a pub in Itaewon district in Seoul. Efforts are being made to identify and locate them, Dr Taweesilp said.

Excluding the four cases reported in Phuket -- which will be included in tomorrow's tally -- the CCSA on Sunday reported five new coronavirus cases, bringing the total in Thailand to 3,009. No additional deaths were reported, leaving the accumulated toll at 56.

Two of the new cases reported on Sunday -- a 44-year-old Thai woman in Bangkok and an 80-year-old Thai man in Narathiwat -- are linked to previous cases, Dr Taweesilp said.

The other three cases are Thai nationals who tested positive after showing symptoms while in state quarantine. They recently returned from overseas -- one from the United Arab Emirates, and two from Pakistan. 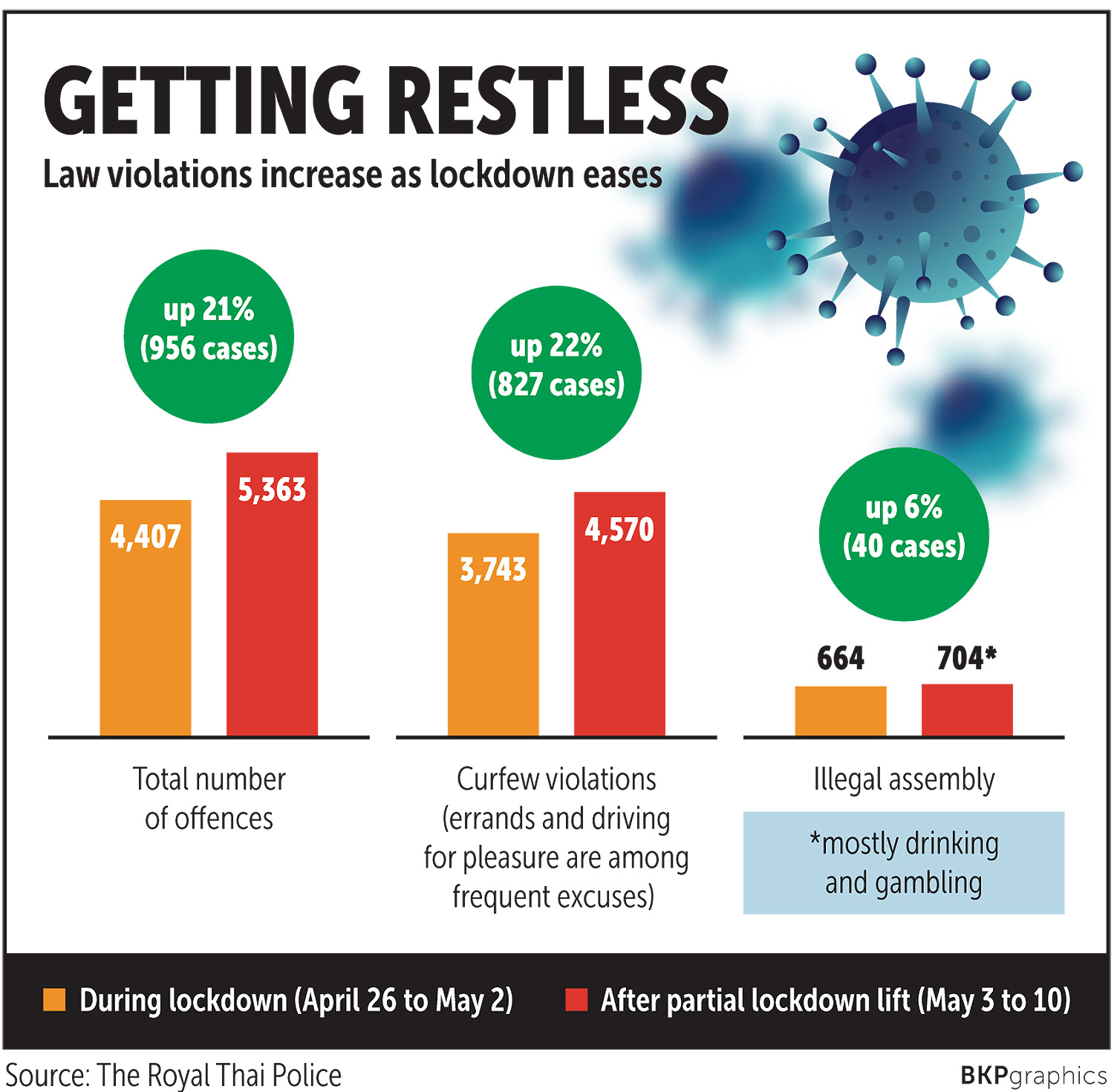 The CCSA spokesman said that despite his statement to the contrary during Saturday's briefing, a shopping mall will not in fact reopen for a two-day trial on Thursday and Friday.

Only the centre's full board has the authority to make that decision, he said, and the issue will be decided by all the board members in a meeting on Friday.

On Saturday, Dr Taweesilp said a mall will reopen for a two-day trial run to assess the effectiveness of safe distancing rules, in preparation for some shopping centres' return to business next Sunday.

In on Sunday's briefing, he stressed the types of places which will be allowed to reopen, as well as the dates they can do so, will be determined on Friday, before adding that health and safety would be prioritised over economic concerns.

The reopening of shopping centres and other larger business premises are slated for the second phase of the plan to ease restrictions imposed in response to the novel coronavirus outbreak.

Meanwhile, a poll by the National Institute of Development Administration found that 83.95% of respondents agreed that Covid-19 control measures should be relaxed now that the situation has improved.