Prime Minister Prayut Chan-o-cha speaks to people at a community centre for distributing food and necessities to people affected by the Covid-19 pandemic at Wat Rakhang Khositaram in Bangkok. The centre was initiated by His Holiness the Supreme Patriarch. (Photo by Chanat Katanyu)

Billionaire Dhanin Chearavanont is urging the government to relax lockdown measures and welcome foreign travellers as soon as possible, and turn the country into a "safe haven" for wealthy visitors.

Mr Dhanin, who is the senior chairman of the kingdom's largest food and agriculture conglomerate Charoen Pokphand (CP) Group, said the move would help revive the tourism sector.

"Thailand's economic losses from the lockdown are estimated to be at 16 billion baht per day or almost 500 billion per month," he told the Bangkok Post. "A longer lockdown will cost us more and more."

Thailand has been under lockdown since March 9 after the government acted to stem an increase in confirmed Covid-19 cases. The government said the coronavirus infection rate is now about 1%. 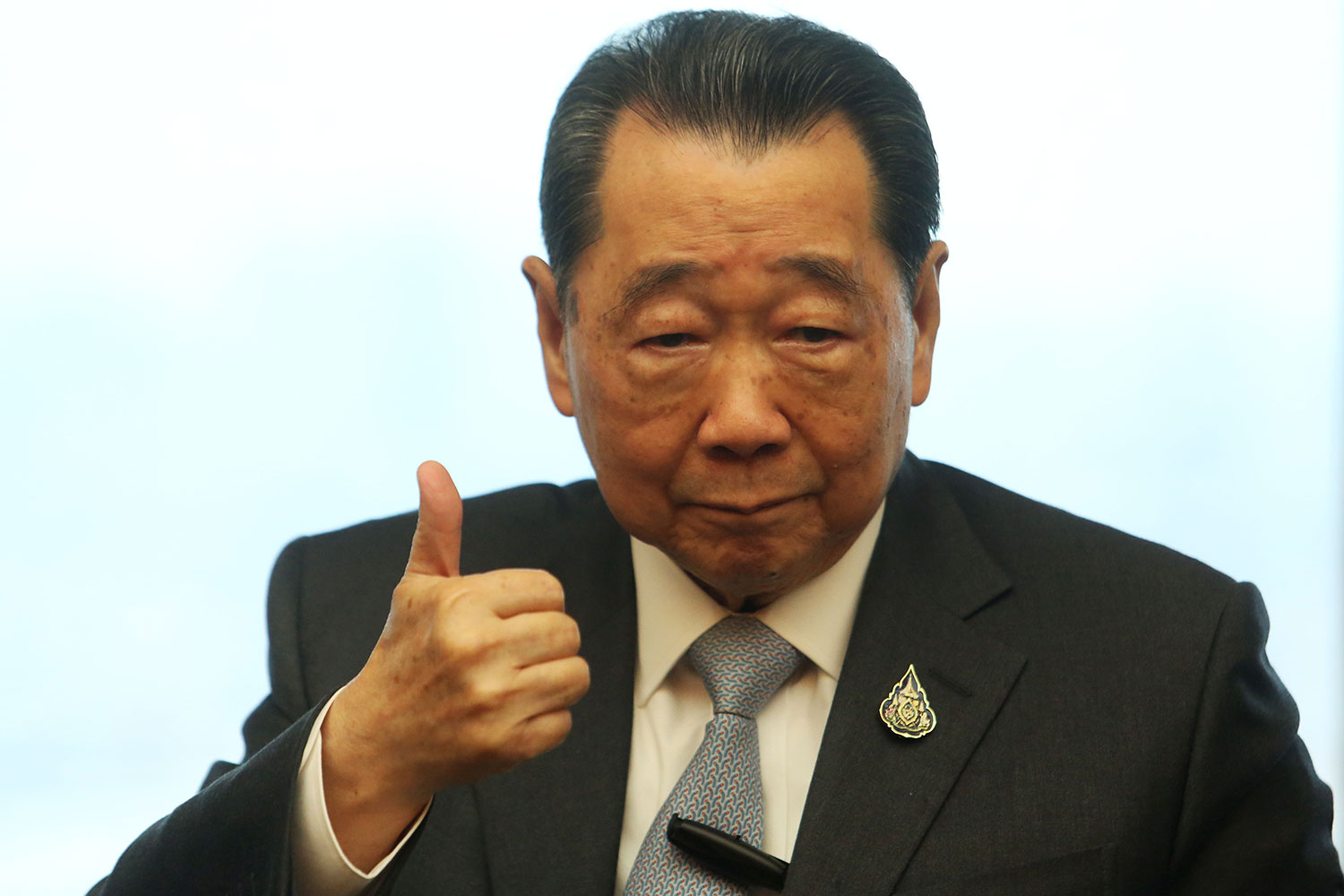 "Thailand’s economic losses from the lockdown are estimated to be at 16 billion baht per day or almost 500 billion per month ... A longer lockdown will cost us more and more." — Dhanin Chearavanont, Senior Chairman of Charoen Pokphand group

The economic impact of the lockdown is apparent as millions of workers applied for unemployment benefits. The tourism sector is also hit hard after the kingdom stopped taking in foreign visitors.

The Centre for Covid-19 Situation Administration (CCSA) did not report any new infections on Wednesday, the first time in 65 days since the lockdown began. The kingdom has recorded 3,017 cases.

"We can't wait until a vaccine is developed and produced in sufficient quantity to roll out to the entire population," Mr Dhanin said. "The economy won't survive that long."

He said the tourism sector accounted for 16-17% percent of GDP and should be revived due to improvements in the virus situation.

Mr Dhanin proposed the government attract high-spending tourists from across the world by highlighting Thailand's success in containing the spread of Covid-19.

"The number of infection and death cases in Thailand is very low compared with other countries, even though our lockdown began later," he said. "There were also a large number of Chinese tourists in the country."

"This reflects the fact that our doctors and hospitals are the best and we need to tell the world about it," he said.

Mr Dhanin topped Forbes magazine's "Thailand's 50 Richest" this year. He is among 20 moguls in the kingdom whom Prime Minister Prayut Chan-o-cha asked to develop relief projects to help people affected by the outbreak.

He said the government should take advantage of Thailand's low Covid-19 figures and turn the kingdom into a "safe haven" for wealthy individuals from around the world.

"We have five-star hotels and resorts; we also have five-star hospitals and the best doctors," Mr Dhanin said. "If we can make rich people feel confident that staying in Thailand is safer than their own countries then they will come."

He said now is the time for Thailand to shift its tourism image from "quantity to quality".

"If we begin today, we can become a leader in this market," Mr Dhanin said. "Thailand is already well-known for its hospitality, warmth, and friendliness."

The tycoon said he is aware some people may disagree with the idea because they don't want foreign tourists entering the country amid the outbreak, but Thailand should take the risk.

"There is always a risk. You walk out of your home to go to work today, you might get hit a by a car. But you still have to go out because you have to work and earn a living," Mr Dhanin said.

"The [tourism] concept is the same," he added. "The challenge is how we can limit and minimise the risk."

Mr Dhanin said he believes the tourism industry will bounce back quickly in the aftermath of Covid-19 during the 'new normal'.

"Many people may never go back into the office because they've learnt they can work [remotely] now," he said. "They may work from the beach, mountain or even overseas. It doesn't matter as long as they can do their job."

Mr Dhanin said CP has realised this new trend and will implement work-from-home policies among its employees in the aftermath of the virus.

"I think office buildings will be smaller in future," he said. "There's no need to build large buildings any more."

"The large buildings we have now may be turned into condominiums or hotels instead," Mr Dhanin added.

When asked what the government should do to help small and medium enterprises to stay afloat during the pandemic, the tycoon said it should issue 30-year bonds to raise money and offer soft loans to them.

"Many businesses are struggling to survive because they don't have the liquidity they need to operate," he added.

"The government needs to step in to ensure they can at least keep employing staff." Mr Dhanin said this can be done because the country's public debt is at 42% of GDP.

He said he has written to Gen Prayut in response to the prime minister's request for help. CP will spend over 700 million baht to fund projects to help vulnerable people.

Mr Dhanin said CP still has more projects in the pipeline, including for water and agriculture development.

Paetongtarn "Ung Ing" Shinawatra of the Pheu Thai party is still the most popular choice for prime minister, according to the National Institute of Development Administration, or Nida Poll. The youngest daughter of former prime minister Thaksin was followed by Pita Limjaroenrat of the Move Forward Party.