Handymen work on a newly installed turnstile at the entrance to Wat Arun Ratchawararam (Temple of Dawn) in Bangkok ahead of a further easing of the lockdown for business on Sunday. (Photo by Pattarapong Chatpattarasill)

Thailand has decided to remove South Korea as well as China and its Hong Kong and Macao territories from its list of Disease Infected Zones for Covid-19 as it further relaxes measures against the outbreak by allowing more businesses, including shopping malls, to reopen on Sunday.

The curfew will also begin one hour later and run from 11pm to 4am.

China and South Korea have been on the Public Health Ministry list since March 6 when the situation was still highly volatile, just before Prime Minister Prayut Chan-o-cha declared a state of emergency. Anyone coming from the countries on the list must undergo 14 days of state quarantine.

Now, with the virus reported to have been well contained in the two countries, "We have agreed to issue a new announcement to de-list them," Public Health Minister Anutin Charnvirakul said on Friday. 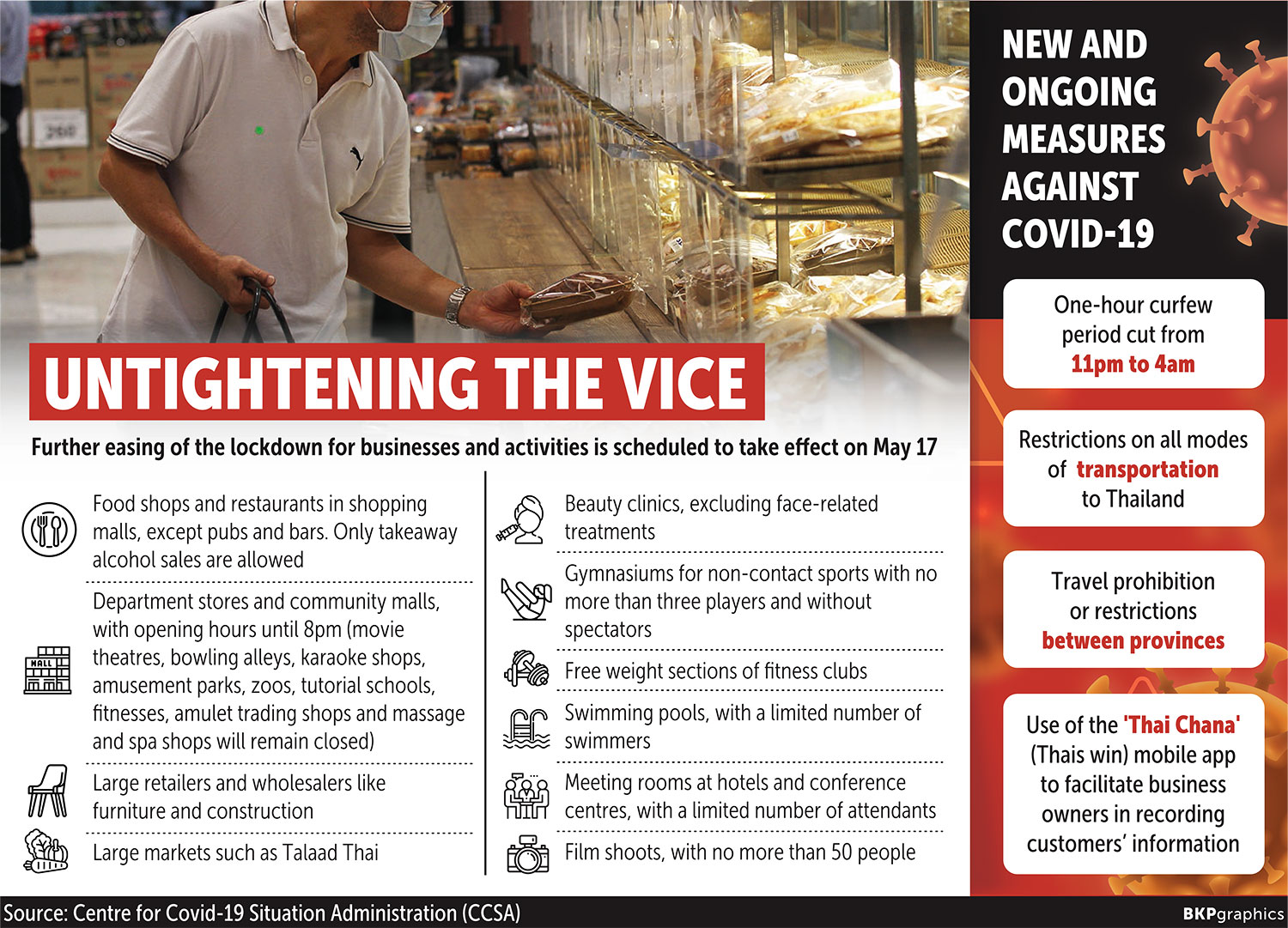 Like Thailand, the daily infection rates in these countries have dropped significantly.

However, commercial international flights into Thailand remain banned until May 31 at least, according to the announcement of the Civil Aviation Authority of Thailand.

"So though they are removed from the list, arrivals will not increase," Disease Control Department chief Suwannachai Wattanayingcharoenchai said.

In fact, he said, more than 200 countries with reports of the virus are still considered risk countries, so Thailand needs to maintain its efforts "not to import more cases", he said.

Taweesilp Visanuyothin, spokesman for the Centre for Covid-19 Situation Administration (CCSA), said on Friday that shopping centres, malls and restaurants inside the buildings will be allowed to resume business nationwide from Sunday.

According to the CCSA, department stores, whose supermarkets have been excluded from the lockdown announced in late March, are among the businesses which have been among the "most cooperative" in following hygiene regulations.

A recent inspection of more than 177,000 venues allowed to reopen on May 3 found 74% have complied with the state's safety precaution guidelines.

In the so-called phase-2 easing of the lockdown, convention centres, wholesale markets and swimming pools will also be allowed to reopen, he said.

Shopping centres will have to close at 8pm, to give people sufficient time to return home in time for the night curfew.

Dr Taweesilp said cinemas, amusement parks, boxing stadiums and gymnasiums will remain closed, while fitness centres will be allowed to resume some activities.

The easing of restrictions comes as numbers of coronavirus cases and deaths have fallen in recent weeks. Seven new cases were reported on Friday, all people already in quarantine who had returned from Pakistan, with no new deaths. On Wednesday, there were no new infections at all.

He said airports remain closed to commercial flights from overseas, and no alcoholic beverages are allowed to be consumed in restaurants.