After nearly two months, the first-ever outbreak of African Horse Sickness (AHS) in Thailand has wiped out 539 horses. Following calls for an investigation, the Department of Livestock Development (DLD) will on Monday launch a probe into the cause of the outbreak. 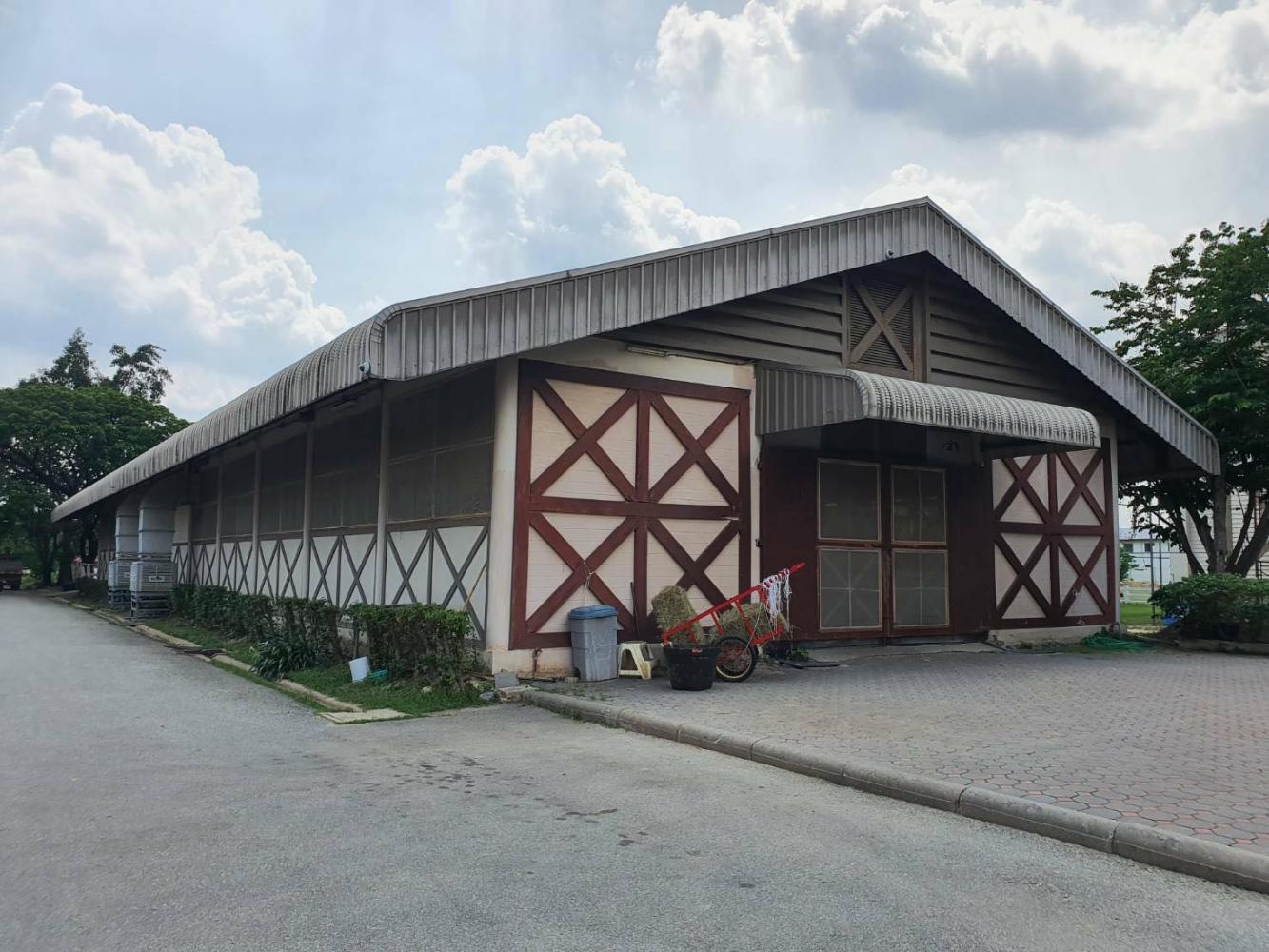 Stables at the Horse Lover's Club in Pathum Thani are now fully covered with net. (Photo by Siangsaw Lertratanachai)

The deadly plague was officially announced in Thailand on March 27, following reports of sudden deaths among horses in Nakhon Ratchasima. Since then, the disease, which is transmitted by mosquitoes, gnats and gadflies, has spread to other parts of the country.

Horse owners in many provinces including Bangkok, Chai Nat and Pathum Thani are now racing to protect their horses.

"I laid my eighteenth bunch of flowers on this mass grave last month. One for each departed soul," Nopadol Saropala, an obstetrician and gynaecologist at Bumrungrad International Hospital and the owner of Farm Mor Por (Dr Por's farm) in Nakhon Ratchasima's Pak Chong district, told the Bangkok Post.

His late Andalusian horse, Espantanio, died of AHS on April 3 and was buried in a mass grave where 17 others were already resting in peace. Phasawi Somchai, chief of Nakhon Ratchasima's livestock development office, said there are 2,036 registered horses in the province.

Dr Nopadol said the spread of AHS has slowed down since he set up mosquito nets and had his horses vaccinated many weeks ago, but the equine plague has dealt a heavy blow to his business amid the coronavirus outbreak.

"I have closed my business and suspended services [temporarily], including horse riding training, renting and breeding. The loss of 18 horses has cost me more than 10 million baht," he said.

Similarly, Sorasak Cheewarattanaporn, the owner of Rattanaporn Farm, said AHS has killed 60 out of his 148 racehorses, costing him over 30 million baht.

"I have recently lost the 10-month-old foal of a thoroughbred and buried it in a grave. It had yet to be given a name when it passed away. The death rate has slowed down since preventive measures were put in place, but I want the authorities to investigate the cause of the disease and bring the culprits to justice," he said. 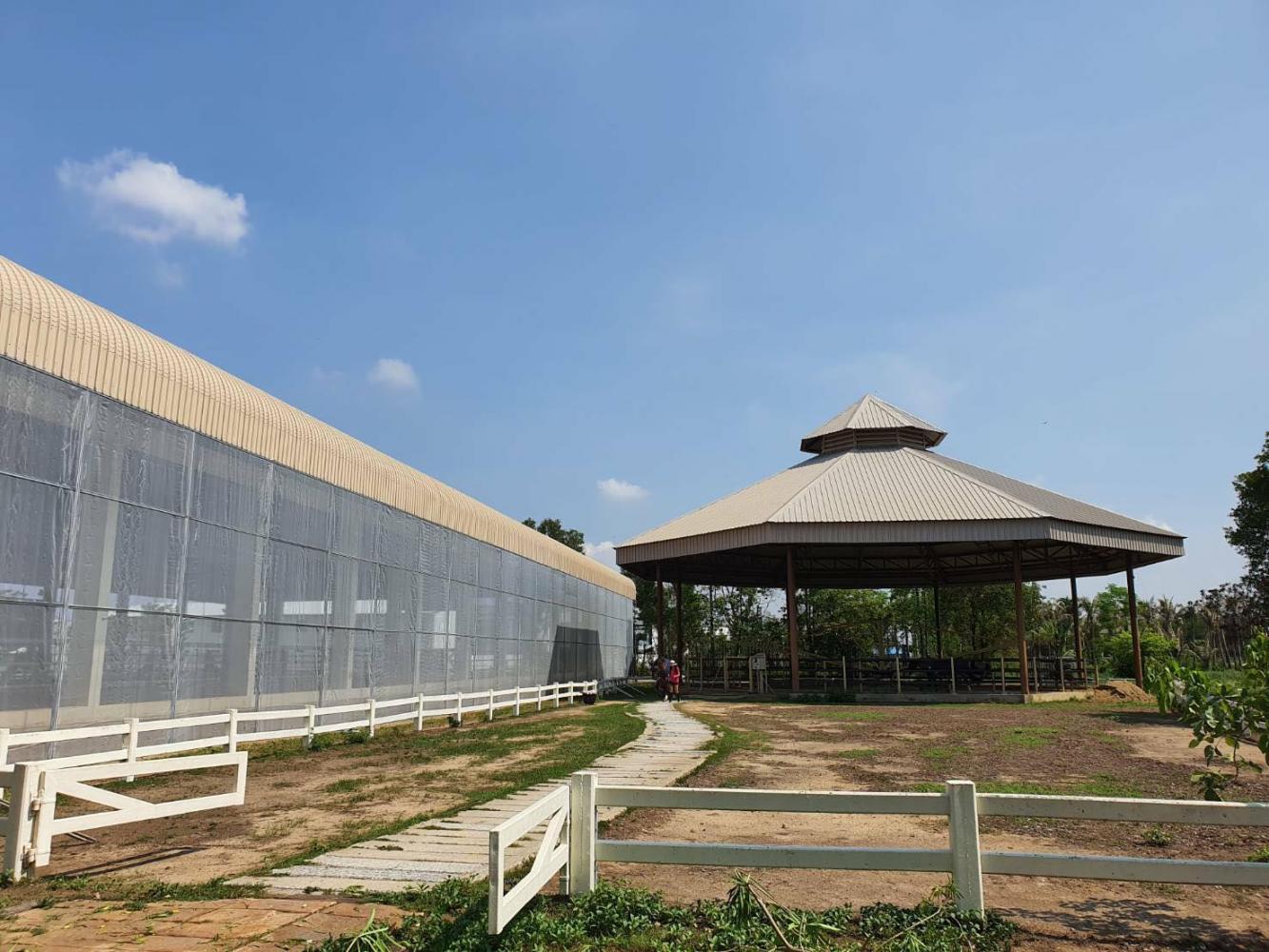 As well as the stables, a riding arena at the Horse Lover's Club is covered with net. (Photo by Siangsaw Lertratanachai)

The outbreak which emerged in Nakhon Ratchasima's Pak Chong district has now spread to neighbouring Saraburi province and killed at least 28 horses.

Horse owners have been trying to find out what led to the outbreak. It is speculated that zebras imported from Africa, which can be natural hosts of the AHS virus, are to blame. Zebras have reportedly been brought into Thailand via Suvarnabhumi Airport for at least two years now.

On April 9, the Daily News reported that officials from the Department of National Parks, Wildlife and Plant Conservation inspected the zebras at a zoo in Chachoengsao, following a Facebook post by a doctor alleging some had been purchased from abroad for 700,00 baht each and 76 out of the 375 animals had died of illness.

Polpoj Polcharoenkiat, owner of the Thongsomboon Club resort said officials would rather take preventive measures to curb the disease than launch a transparent investigation.

"Why aren't you [officials] taking action? Are you hiding anything from us? Your procrastination can reduce the virulence of the AHS virus inside zebras and make it undetectable. You know there are only three groups who own zebras: zoos, collectors and traders who use the country as a transit point for equine stocks," he said. 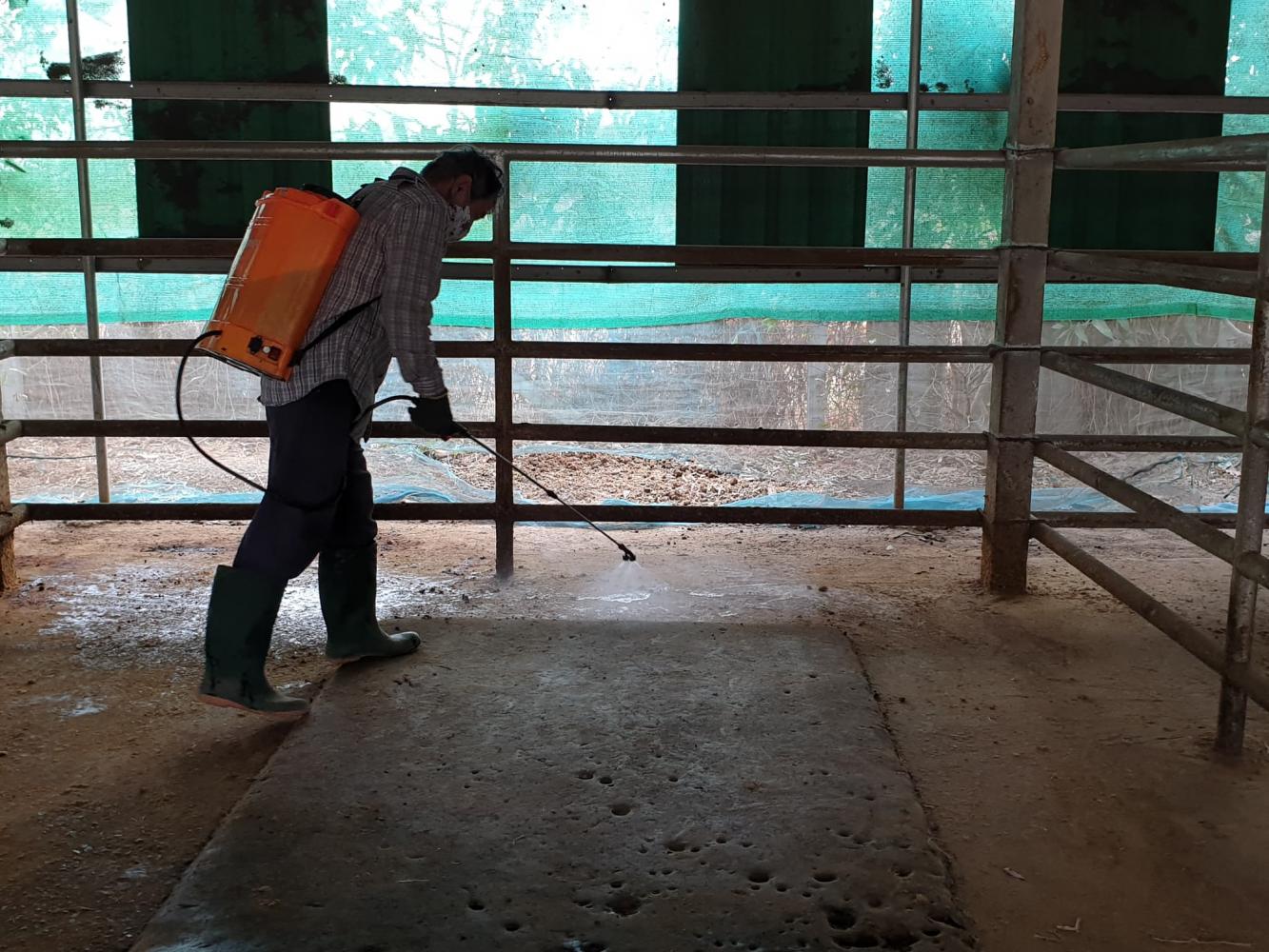 A worker sprays wood vinegar in a private stable in Chai Nat to protect horses from insects. (Photo by Katesuda Meteeviwat)

Chalermcharn Yotviriyapanit, owner of the House of Horse riding club and former Thai national dressage rider, said the ban on the movement of horses affects both local and international horse racing.

"If the livestock department gives the green light, local competitions may resume with stricter control measures. However, we may not be allowed to join international competitions abroad for now. Fortunately, our horses and athletes who are now training in France can still join the Tokyo Olympics next year," Mr Chalermcharn said.

His riding club is located in Bangkok, which is outside the outbreak area, but he said he is stepping up biosecurity measures to protect 20 horses from the AHS.

"If the disease spreads wider, the livestock department may consider expanding vaccinations. I have adapted my schedule to only allow my horses outside the stable during the day when the midges are not so active, otherwise they will have health problems if they are kept in mosquito nets for too long," he said.

Harald Link, president of the Thailand Equestrian Federation (TEF), said the AHS outbreak has brought the horse racing industry to a halt because all programmes will be postponed this year and international matches will be put on hold for at least two years.

"According to the OIE, Thailand is considered an AHS outbreak zone. It is difficult for foreign horses to come here and return to their home countries because they will be at risk of infection," he said when contacted about the issue. 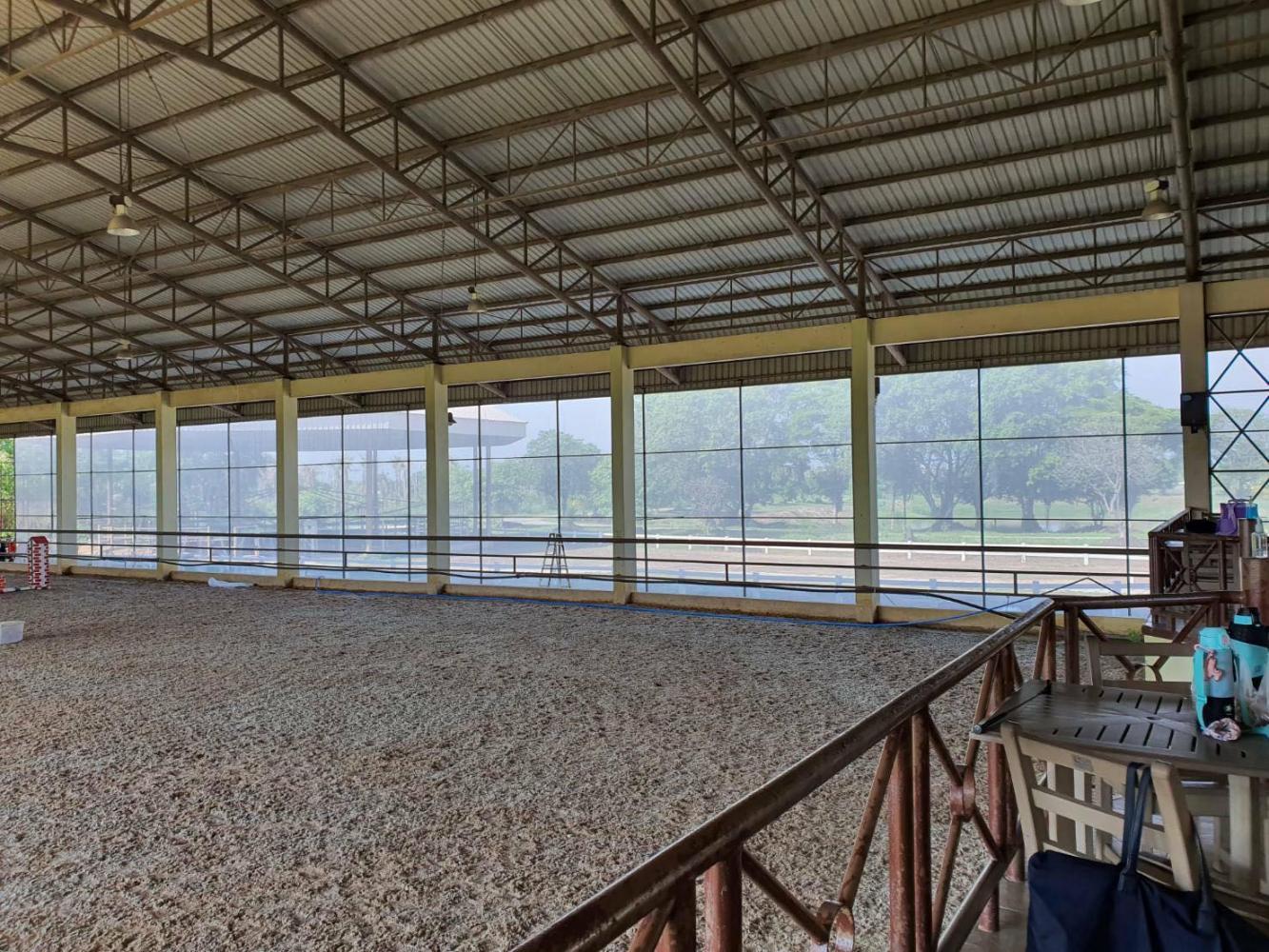 The riding arena at the Horse Lover's Club is covered with net to protect the animals.  (Photo by Siangsaw Lertratanachai)

Search for a cure

Sudarat Amornsak, a freelance veterinarian based in Nakhon Ratchasima and Bangkok, said there are no specific treatments or drugs for AHS.

"At best, we can alleviate symptoms and sustain them, but 90% of the infected horses die. Horse owners must get rid of puddles where the larvae of midges and mosquitos can hatch and use mosquito nets and chemicals to ward off these vectors because they can multiply under favourable climatic conditions, such as heat and light rain," she said during a phone interview.

After Thailand began inoculating some 4,000 horses last month, Dr Sudarat said horse owners will have to wait and see whether the live attenuated vaccine proves effective in rallying the immune system to combat the AHS virus.

"However, it must be done carefully because up to 10 in 1,000 horses can get sick due to immunisation. Accordingly, owners must set up mosquito nets to keep them apart from the uninfected," she added.

Dr Sudarat urged officials to collect blood samples from zebras imported from Africa as soon as possible as the virus is only detectable for 40 days after the animals become infected and the window of opportunity to trace the outbreak is narrowing by the day.

"[However,] the virus will continue to spread to the rest of the herd. When zebras give birth or have new members, they will be infected and become asymptomatic carriers," she said. 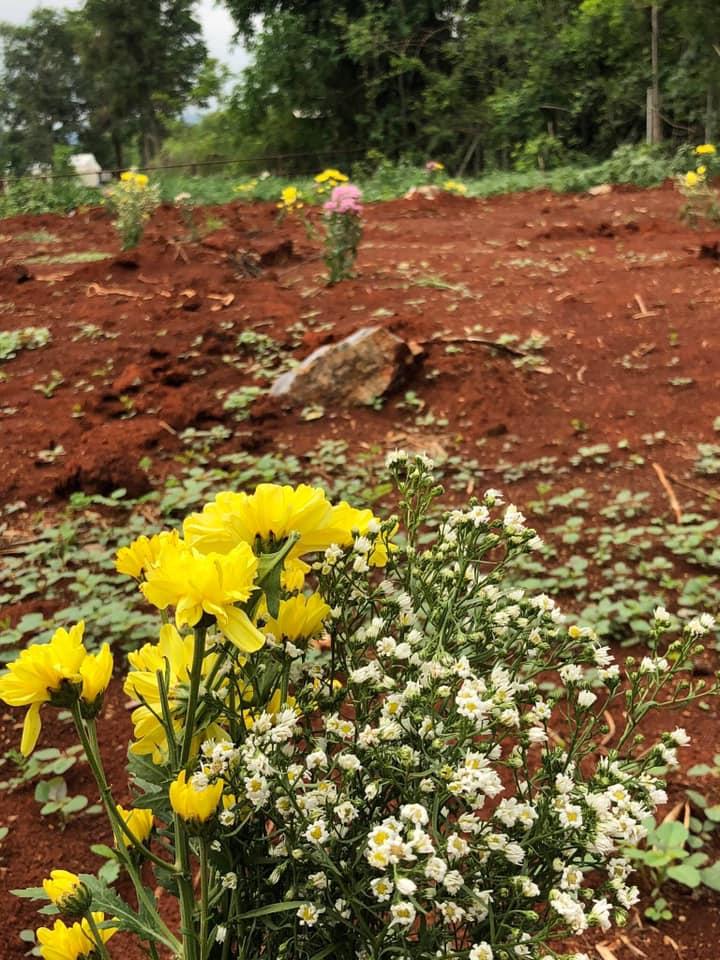 Department director-general Sorravis Thaneto said the first horse death occurred on Feb 24, but horse owners and veterinarians did not report it to the livestock department.

"Once informed, we immediately sent the team to investigate the incident and collect samples on March 26. Then we enforced restrictions on the movement of equine species and introduced biosecurity measures, including vaccination," he told reporters on May 15.

The department's Pak Chong office announced the outbreak on March 27.

Mr Sorravis said the department acquired 4,000 doses of AHS vaccine from Maxwin, an animal feed company, and has recently imported the next batch.

"There are around 13,000 horses nationwide. We have vaccinated nearly 4,000 horses and will inoculate another 4,000 in the epicentre of the disease and its 50-kilometre radius," he said.

Mosquito nets have been set up at 60% of horse farms across the country, he added.

Mr Sorravis said the investigation must be thorough and the department needs more information to determine the cause of the AHS outbreak.

"Starting this Monday, the team, led by Panthep Ratanakorn of Chulabhorn Royal Academy, will collect blood samples from around 500 zebras nationwide. It requires the use of tranquilisers and wildlife veterinarians," he said.

Following questions about the lax safety measures, Mr Sorravis said the livestock department did not have the authority to screen imported zebras until they were included in the Animal Epidemics Act on April 8.

"In the past, they were included in the list of the Convention on International Trade in Endangered Species of Wild Fauna and Flora under the responsibility of the Department of National Parks, Wildlife and Plant Conservation. From now on, we can enforce disease control measures and require quarantines at home and destination countries," he said.

The livestock department has repurposed its fund of 10 million baht to provide AHS vaccine and mosquito nets to affected horse farms.

Meanwhile, local stakeholders in Nakhon Ratchasima have been working closely as a committee which updates information all the time. A source from the committee, who asked not to be named, told the Bangkok Post that there has been a debate on how to collect blood samples and vaccinate zebras.

"Unlike horses, zebras are very difficult to handle. Even though we managed to vaccinate them, we have to keep them in mosquito nets for a month. Some of them are very uncontrollable," the source said. 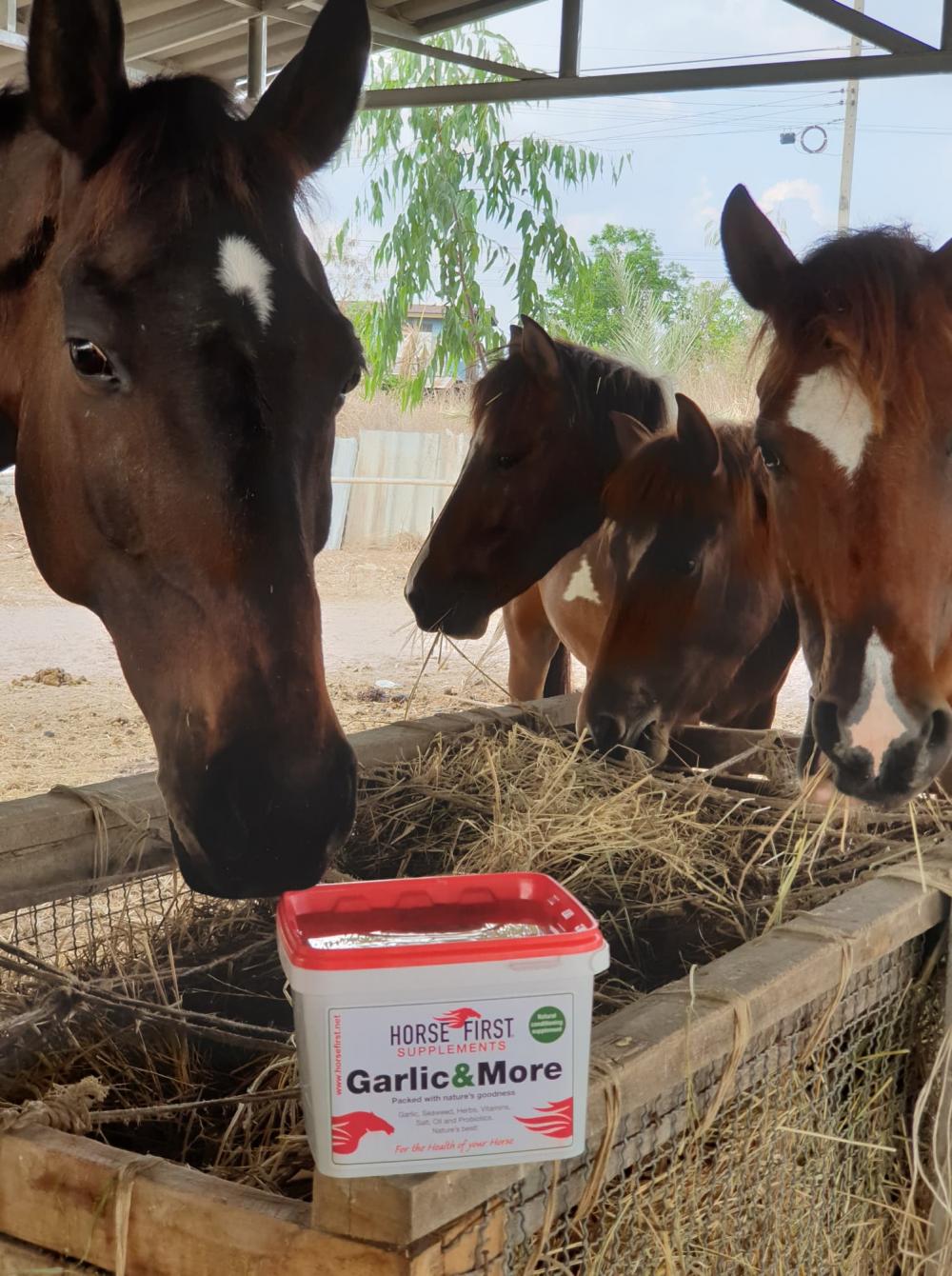 A supplementary diet is given to horses to give them an odour that chases away mosquitos, gnats and gadflies. (Photo by Katesuda Meteeviwat)