Move set to pave way for its restructuring

The Finance Ministry will sell 3.17% of its stake in the financially-troubled Thai Airways International (THAI) to the state-run Vayupak 1 Fund, with the aim of stripping the airline of its state enterprise status.

Transport Minister Saksayam Chidchob held a teleconference to inform THAI executives of the decision on Wednesday.

He has given THAI a free hand in selecting up to 30 professionals to be appointed as rehabilitation planners.

After that list is forwarded to Prime Minister Prayut Chan-o-cha for his consideration on Monday, it will be submitted to the Central Bankruptcy Court.

The share sale will strip the airline of its state enterprise status, which entails legal restrictions, particularly under the the 2000 State Enterprise Labour Relations Act.

Those restrictions currently stand in the way of fulfilling the court-ordered restructuring of the airline.

THAI's labour union on Monday strongly opposed the plan as it will result in the dissolution of the union.

But Finance Minister Uttama Savanayana on Wednesday said the Vayupak 1 Fund will move to buy the shares as soon as possible.

He added the shares could change hands at a below-par price without breaking any regulations.

Once concluded, the matter will be forwarded to the cabinet for its consideration. 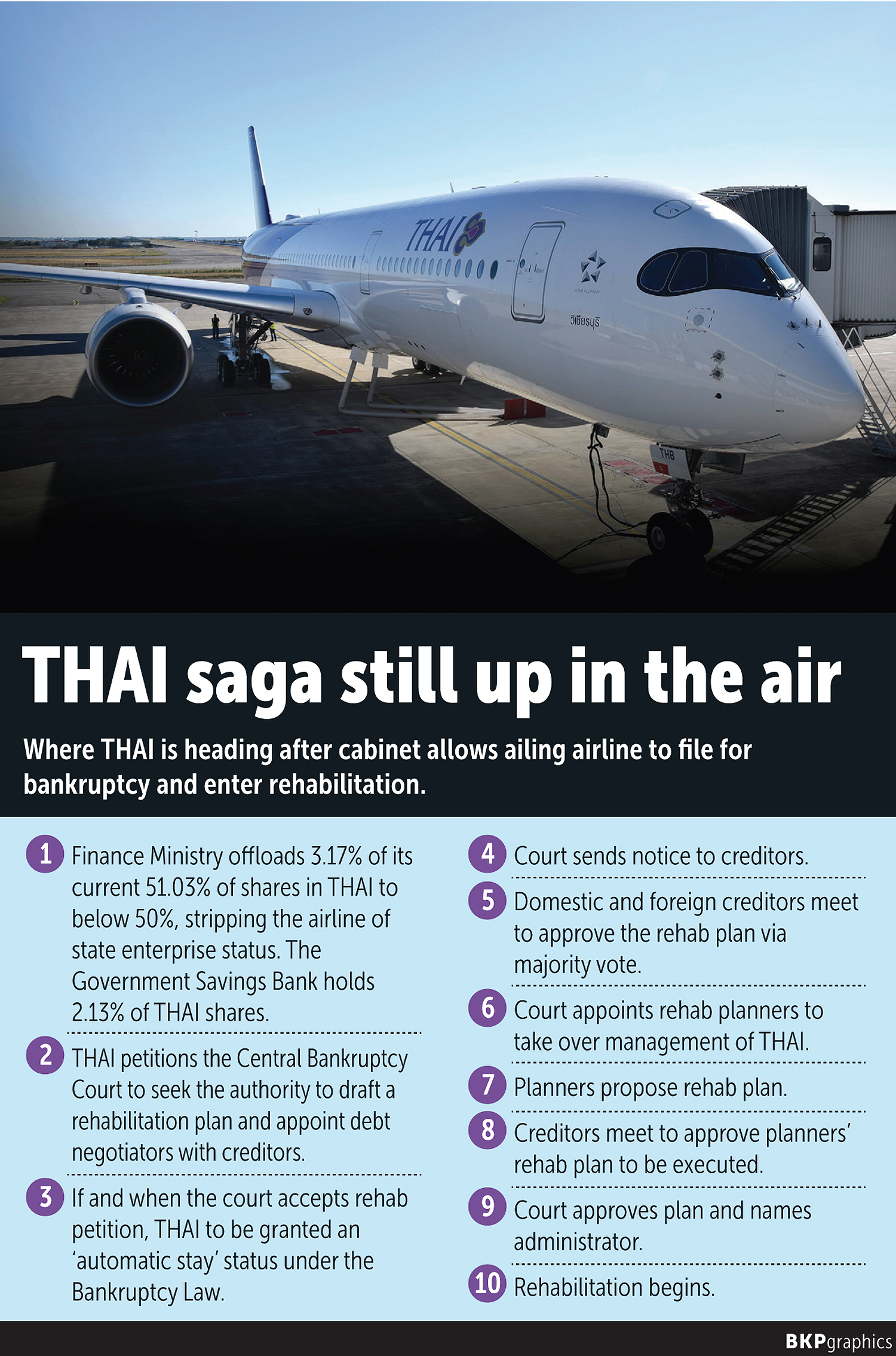 The Finance Ministry holds 51.03% of the shares in THAI, while the Government Savings Bank holds 2.13%. Selling 3.17% of the ministry's shares will reduce the two state entities' stake in the airline to below 50%.

The shares are expected to sell for 600-700 million baht, a source at the ministry said.

A crucial part of the rehabilitation plan is to remove the airline's state enterprise status.

A source in the Transport Ministry said it is estimated that 6,000 of the 21,000 THAI employees will be laid off under the plan and receive compensation equivalent to 10 months' salary.

A meeting of the executive board of the Vayupak 1 Fund chaired by deputy finance permanent secretary Jumpol Rimsakorn is today expected to approve its share purchase from the ministry.

The source said careful consideration will be given to the share purchase price.

THAI's share price on the stock market has gone up in recent days and the share purchase price should be set based on the average prices in the previous seven days of trading, plus a discount of 15-20%.

The agency is attempting to stem panic withdrawals of cash by some members of the cooperatives, who are fearful the national carrier will not be able to service its debts.

Of the 82 cooperatives, the Electricity Generating Authority of Thailand cooperative has the biggest investment valued at 8.2 billion baht.

Mr Pichet said that not all cooperatives' debentures mature at the same time, allowing the airline room to breathe and a wide window of repayment spanning from this year until 2034.

This year, debentures worth 1 billion baht held by 21 cooperatives are due.

However, once the court accepts the airline's bankruptcy petition and sets the process in motion, the debentures will be reflected in the rehabilitation blueprint with revised repayment terms.

He said the cooperative members' investment in THAI is relatively small compared to the savings cooperatives' 3.3 trillion baht nationwide tally.

Meanwhile, the THAI workers union has reversed its stance and now says it will not stand in the way of the government's plan to reduce its stake in the national carrier, the union's president said on Wednesday.