B.Grimm has been a major supporter of WWF Thailand to help save tigers in the country

Harald Link, the chairman of B.Grimm, calls for the protection of wild tigers which are threatened by loss of habitat and poaching.

In the wild, tigers play the role of apex predator. The biggest of the wild cats can roam almost 300 kilometres to find food and mates, and they very rarely come into contact with other tigers or people.

Unfortunately, the number of wild tigers in Thailand is dwarfed by the numbers that now live in captivity.

There are roughly 200 tigers in the wild and the kingdom is committed to increasing that number to 300 in the coming years.

Sadly, many wild animals face extinction due to a breakdown in the ecosystem of their habitat.

Humans are sharing resources with millions of species. The biodiversity in the forest enriches nature endlessly. However, wild animals are facing the threat of poaching and the constant decline in their population every year has driven some species to extinction or near extinction.

The tiger, one of the protected and endangered species, is an indicator of the natural abundance of the forests which provide habitats for the wildlife. The wild cat is an apex predator at the top of the food chain. An increase in the number of the tiger population demands an adequate supply of its prey and plants to satisfy the tigers' needs for food. Such relationship serves to illustrate the abundance of the forests. 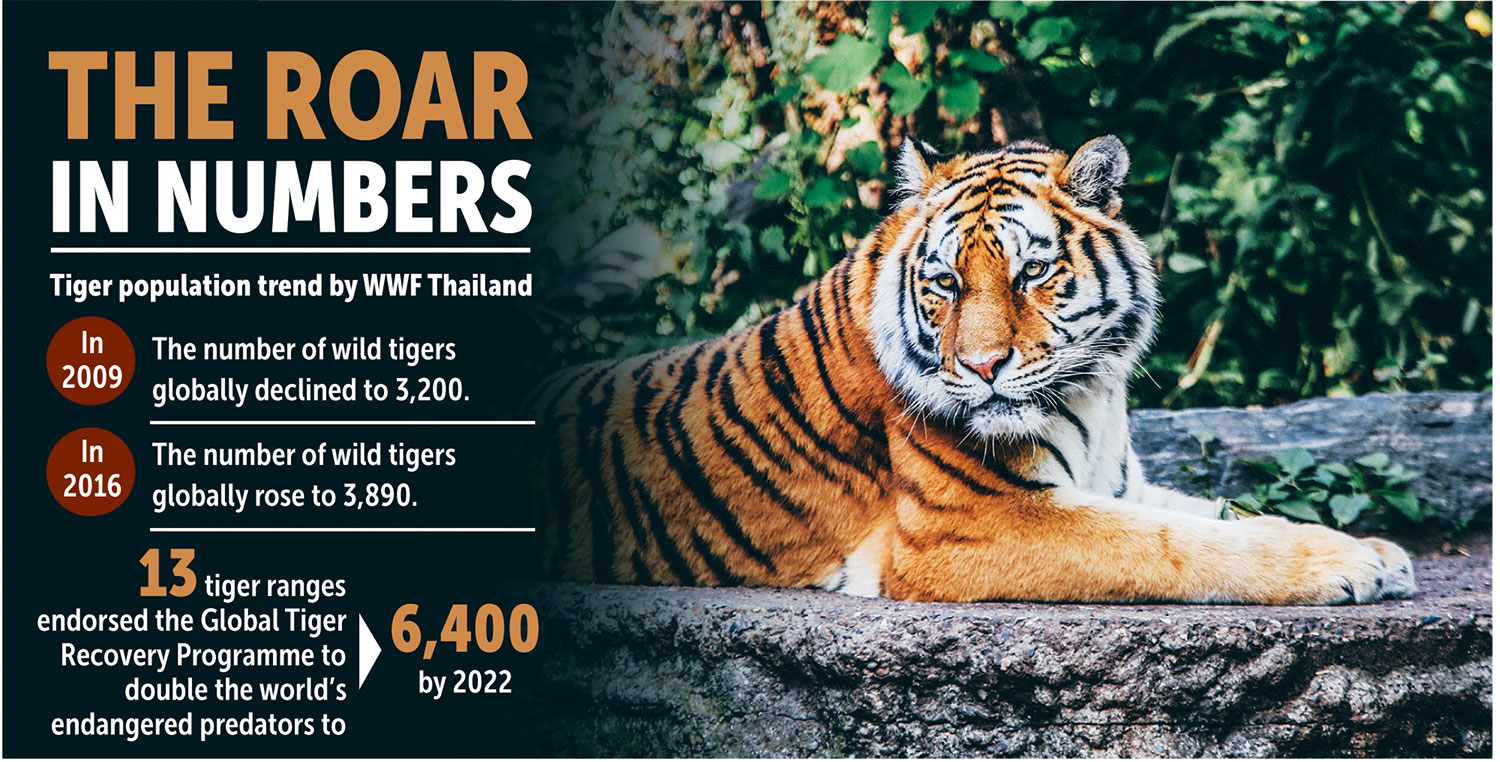 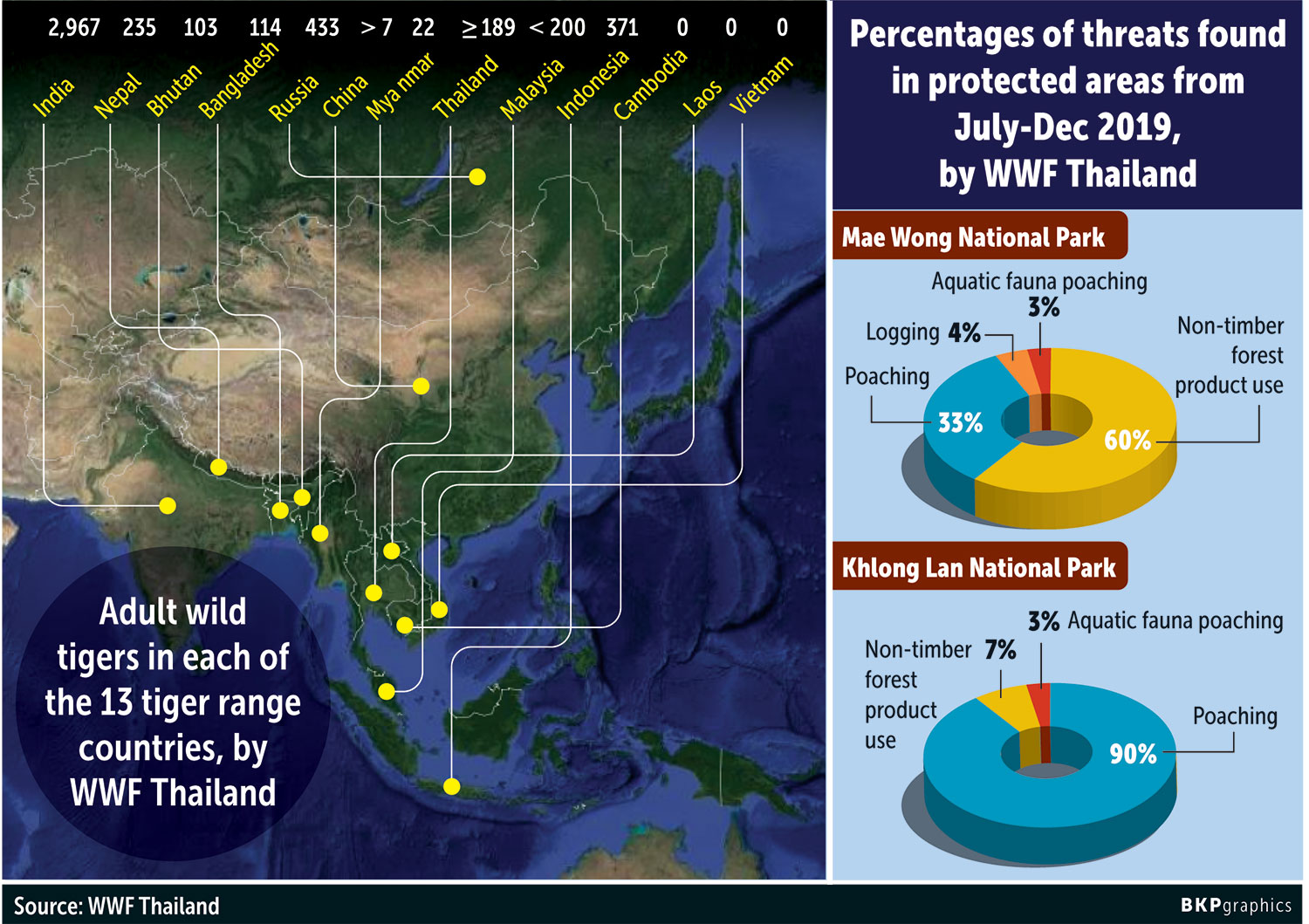 Harald Link, the chairman of B.Grimm, has concerns about the fate of the kingdom's wildlife which are reflected in the years of effort he has put in to saving the local tiger population from the threats of deforestation, poaching and demand for wildlife products.

Speaking in an exclusive interview with Bangkok Post, Mr. Link said that B.Grimm has supported WWF Thailand and the Department of National Parks in their tiger recovery project in Mae Wong and Khlong Lan National Parks for seven years.

"Thailand is one of the very few countries and the only SE Asian country where there are still enough tigers to attempt to increase the population," Mr. Link said. "We know that if you disturb the top of the food chain, the whole environment will be in disarray. It is very difficult to put it back into balance," he added. "In Thailand, we still have one last chance."

The current pandemic has shown us the devastating results of an ecology out of balance. The W.H.O. estimates that 70-75% of new emerging infectious disease are zoonotic (passed from animals to humans). Aggressive wildlife protection efforts will not only protect these magnificent creatures but will also mitigate against the severity of future pandemics and their effects on human welfare and economic stability.

According to WWF Thailand, there were approximately 100,000 wild tigers in the world at the beginning of the 20th century, but that population had declined to about 3,200 in 2010.

Since then, the 13 have endorsed the Global Tiger Recovery Programme to double the world's endangered predator population to 6,400 by 2022.

According to the Department of National Parks, tigers are found in the Western Forest Complex in the northwest, along the Tenasserim Mountain Range, which covers Mae Wong and Khlong Lan National Parks.

The Dawna-Tenasserim Landscape (DTL) straddles the border between Thailand and Myanmar. It is considered one of the most pristine natural landscapes in the Greater Mekong region. The 63,239 square kilometre area is home to several endangered species, including tigers and elephants.

The situation in Thailand is better than in other Southeast Asian countries. While Vietnam, Cambodia and Laos have completely lost tigers, Malaysia, Indonesia, and Myanmar are suffering a sharp decline. No country in the region looks likely to meet its target.

Conservationists require an accurate number of how many tigers are living in the wild. The B.Grimm chairman said he has provided equipment, especially camera traps and field equipment, for rangers in Mae Wong and Khlong Lan, to enable them to establish the population baseline for tigers.

"One thing that was missing is they would like to prove what a great distance the tiger can travel by clearly identifying them," he said. "No two tigers look the same because of stripes, so we donated a lot of cameras.

"Since it is difficult to communicate in the forest and many hunters from foreign countries come in, rangers have to be able to communicate over long distances," Mr Link added. "So we built them a communication station on the high ground." 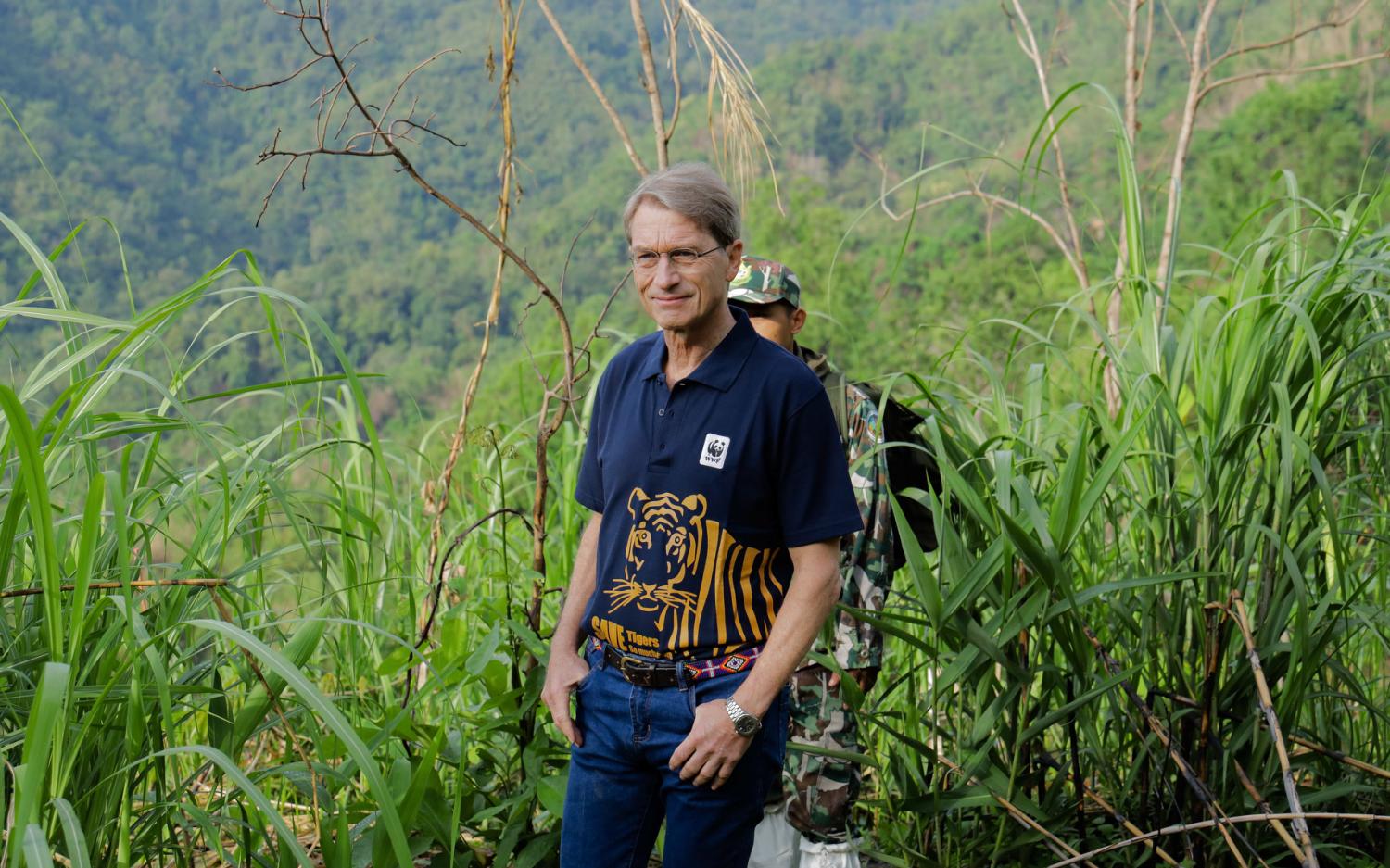 He said the group has improved habitats for tiger prey, adding that its staff put a lot of effort into regenerating grassland and creating saltlicks for herbivores at Khlong Din Khem in the Mae Wong National Park.

Four ungulate species, including muntjacs, sambars, gaurs, and elephants, were reported to have visited the site to eat grass and saltlicks.

The guardian of the wild

B.Grimm has supported rangers in strengthening their patrol efforts and capacity through training courses. According to WWF Thailand, while Mae Wong was at risk from excessive foraging, including the harvesting of mushrooms and bamboo shoots, Khlong Lan was under threat from poachers.

Last year, rangers went to two training courses on the use of smart patrol data and location aids, including GPSs, compasses, and maps. In addition, students at Kasetsart University's Faculty of Forestry took part in two training sessions to prepare for future roles in protecting natural resources and wildlife.

The company has sponsored campaigns in schools, communities and youth camps to raise awareness about tiger conservation, reaching out to around 450 students and 1,500 people.

After endorsing the conservation project for seven years, Mr. Link said the tiger recovery programme has raised some tiger cubs, but the project needs additional funding.

"There are some tiger cubs and hardly any reported losses. Thailand is one of the better countries," he said.

"However, the WWF said it needs a million dollars more per year," Mr. Link added. "You can see a lot of funding is needed."

To boost the tiger population globally, WWF Thailand is calling for urgent investment in protected areas, more rangers to stem the tide of poaching, more tiger habitats, and an end to the belief that tiger body parts have special medicinal properties.

"We are inextricably connected -- if animals suffer, humans suffer. Covid-19 is a painful reminder of what happens when wildlife is not treated properly. Protecting the tiger, an apex predator, and keeping this system in balance is absolutely critical not only for their species but also for human existence," Mr Link said.