The Commerce Ministry, coconut farmers and monkey school owners have dismissed claims by an animal rights group that monkeys trained to pick coconuts were maltreated and announced plans to take foreign diplomats on a visit to see the monkeys at work for themselves. 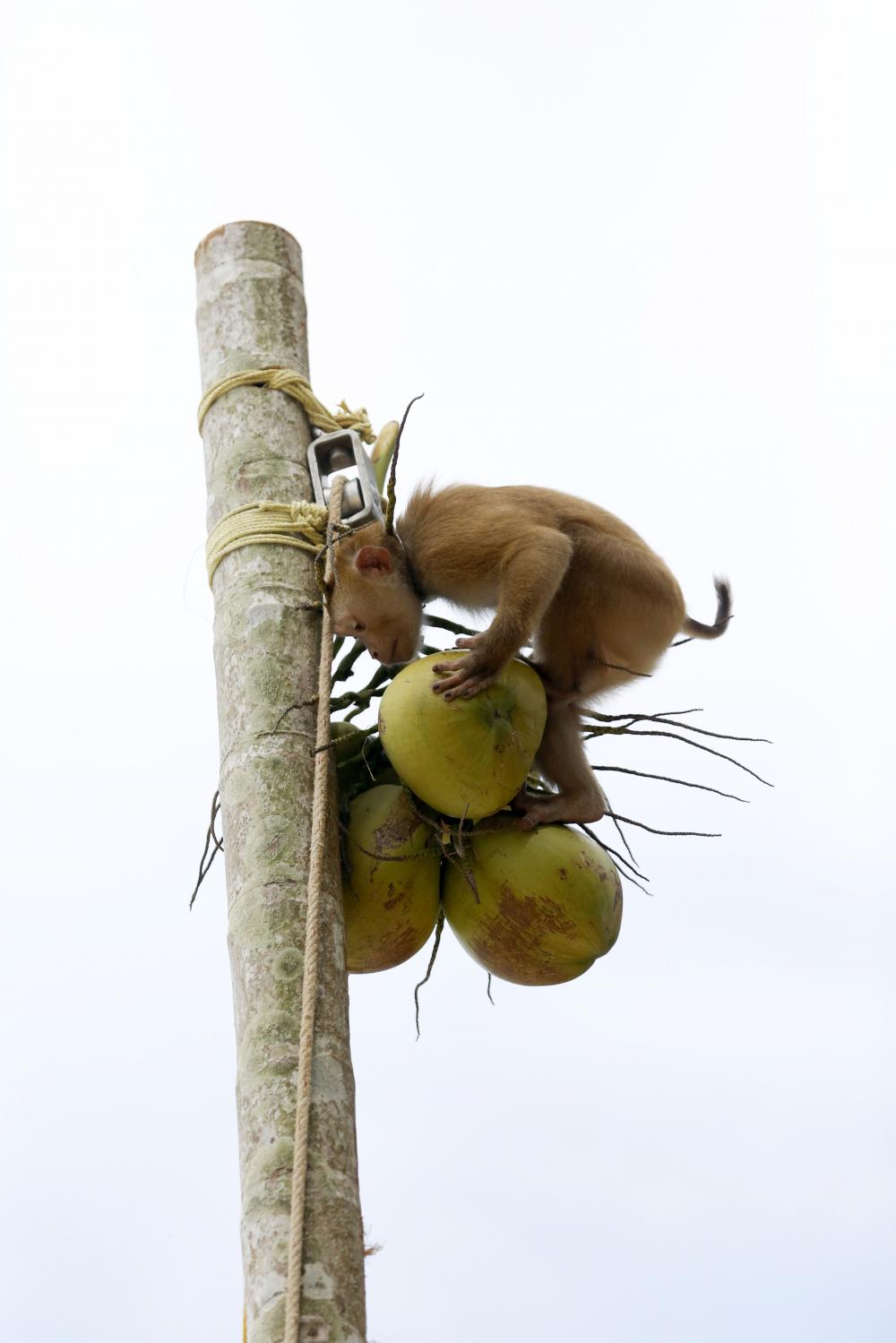 A monkey is taught to pick coconuts at a plantation in Surat Thani province. The coconut milk industry in Thailand is under fire by Western animal rights activists for allegedly allowing the animals to be used as 'slave labour'. (Photo by Karnjana Aryuwat­tanachai)

Boonyarit Kalayanamit, permanent secretary for commerce, said the monkey owners did not abuse or exploit the animals which have been humanely trained to pick coconuts.

"However, the ministry is ready to invite foreign diplomats to visit coconut plantations and see how the monkeys pick coconuts so they will realise this is not animal cruelty [as claimed by People for the Ethical Treatment of Animals (Peta)],'' Mr Boonyarit said.

He also said he has instructed commercial attaches in Thai embassies overseas to provide an explanation to retailers in foreign countries.

He added the ministry will also discuss the issue with the Agriculture and Cooperatives Ministry to find further solutions.

Pramual Pongthawaradej, a Demo­crat Party MP for Prachuap Khiri Khan, who chairs a House subcommittee tackling the falling price of coconuts, said the group has asked operators of coconut milk plants to justify their practices to Peta.

The subcommittee has also asked the Department of Agriculture to give details regarding the use of monkeys to pick coconuts, Mr Pramual said.

Somjai Sae Kow, the owner of a school which trains the monkeys in Surat Thani's Kanchanadit district, said the practice of capturing monkeys from the wild to pick coconuts ceased a long time ago.

Currently, monkeys are bred and raised before being trained, Ms Somjai said. She also denied claims the monkeys are forced to pick up to 1,000 coconuts a day, adding the monkeys do not work every day.

Coconut-picking monkeys are mostly males and their abilities vary, she said, adding the owner of the monkey receives 2 baht per a coconut picked.

"Foreigners may not understand our livelihood. Also, humans are not built to climb up a coconut tree to pick fruit. They will be at risk, compared to monkeys which have the natural ability to do so," she said.

"The current batch of monkeys working for us were bred from previous generations.

"There is no cruelty. Actually, they are looked after well. They are fed well with rice, milk, and fruit three times a day. They are treated like family members,'' Mr Chaowalit said.

Major western retailers have begun to pull Thai coconut products from their shelves amid allegations the coconuts were picked by poorly treated monkeys.

According to Peta, the monkeys are snatched from the wild and trained to pick up to 1,000 coconuts a day.

Peta said monkeys were used by farms that supply some of Thailand's coconut milk brands, which are exported to many countries in Europe and the United States.

"Following Peta Asia's investigation, more than 15,000 stores will no longer purchase these brands' products, with the majority also no longer buying any coconut products sourced from Thailand monkey labour," the group said on its website on Saturday.

In the UK, Waitrose, Ocado, the Co-op and Boots all vowed to stop selling certain Thai coconut products, the BBC reported.

A spokesman for retail giant Tesco told the BBC: "Our own-brand coconut milk and coconut water does not use monkey labour in its production and we don't sell any of the branded products identified by Peta.

"We don't tolerate these practices and would remove any product from sale that is known to have used monkey labour during its production."

The Morrisons chain said it had removed products made with monkey-picked coconuts from its shelves.

Sainsbury's told the BBC: "We are actively reviewing our ranges and investigating this complex issue with our suppliers."

Peta said it had found eight farms in Thailand where monkeys were forced to pick coconuts for export.

Male monkeys are able to pick up to 1,000 coconuts a day, Peta says. It's thought that a human can pick about 80.

The group said it also discovered "monkey schools", where the animals were trained to pick fruit, as well as ride bikes or play basketball for the entertainment of tourists.

"The animals at these facilities -- many of whom are illegally captured as babies -- displayed stereotypic behaviour indicative of extreme stress," Peta said.

"Monkeys were chained to old tyres or confined to cages that were barely large enough for them to turn around in."

"One monkey in a cage on a lorry bed was seen frantically shaking the cage bars in a futile attempt to escape, and a screaming monkey on a rope desperately tried to run away from a handler.

"Peta is calling on decent people never to support the use of monkey labour by shunning coconut products from Thailand."