The Chana Rak Thin Network has renewed its call for the government to scrap a plan to develop a special economic zone (SEZ) in Songkhla's Chana district ahead of a zoning meeting concerning the proposed project. 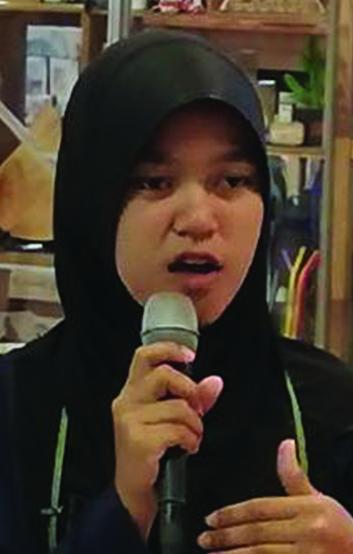 Activist Kaireya Ramanyah, known as "daughter of the sea", renewed the call by inviting Prime Minister Prayut Chan-o-cha to her home where she can see dolphins swimming in the ocean.

Ms Kaireya issued the invitation during a public forum on Tuesday at the Bangkok Arts and Culture Centre (BACC).

"You may realise that real development should be in line with [safeguarding] natural resources," she said. "Your plan might generate huge profits, but it is not for locals."

"I want to grow up in a pristine environment," Ms Kaireya added. "It is clear that the Eastern Economic Corridor [EEC] is not a solution. It is now coming to the South. Where will it go next?"

She said the government is planning to construct an industrial complex that will likely see her home disappear. She said the area has a 6,000-year-old sand dune which will be dug up to make way for deep seaports and wave barriers.

According to the Southern Border Provinces Administration Centre (SBPAC), 80% of people in Chana approve of the project. It said the complex would help eliminate the insurgency as conflicts in some districts of Songkhla are connected to the problems.

Officials will hold a public hearing on Saturday to change the colour coding of Chana from green to purple to allow the construction project to proceed.

Paranee Sawasdirak, an advocate planner at the Civil Society Planning Network, yesterday criticised the SBPAC for submitting its own development plan to designate Chana as an industrial area, designated by the colour purple. In fact, the Department of Public Works and Town & Country Planning is drawing up its draft to designate the district as an agriculture and settlement area, designated by the colour brown.

"It is going beyond its mandate. The SBPAC cannot authorise the SBPAC to be in charge of urban planning," Ms Pranee said. "You can propose the scheme to the Department of Public Works and Town & Country Planning, but not to those in power [cabinet members in the SBPAC] who already agreed in principle."

"Are you working for those who have already bought properties in the soon-to-be purple area?" she added.

Amarin Saichan, a lawyer at the ENLAWTHAI Foundation, urged those involved in the scheme to conduct a thorough environmental impact assessment (EIA) study before proceeding to reassign zoning colours.

"The seven-page document [proposal] does not give any details on what the special economic zone will look like because it covers a large area of over 16,000 rai," Mr Amarin said.

"Do locals understand the impact of deep seaports? The document does not address the project's negative consequences on coastal fishing and marine resources," he added.