Seven permanent tents on Pha Hua Sing on Phu Thap Boek in Lom Kao district of Phetchabun have been removed after a dispute between the landowners and the Natural Resources and Environment Ministry. (Photo by Sunthorn Kongwarakhom)

PHETCHABUN: The owners of land plots leading to the tip of Pha Hua Sing, a famous cliff on Phu Thap Boek, have removed some permanent structures that spoiled the scenery and reopened the path for visitors to the photogenic area.

Kuaneng Thor dismantled seven permanent tents erected near the highest point of the cliff on the mountain on Saturday night. He and other landowners also removed a barrier after a warning by security authorities that the landlords were defying a state order. 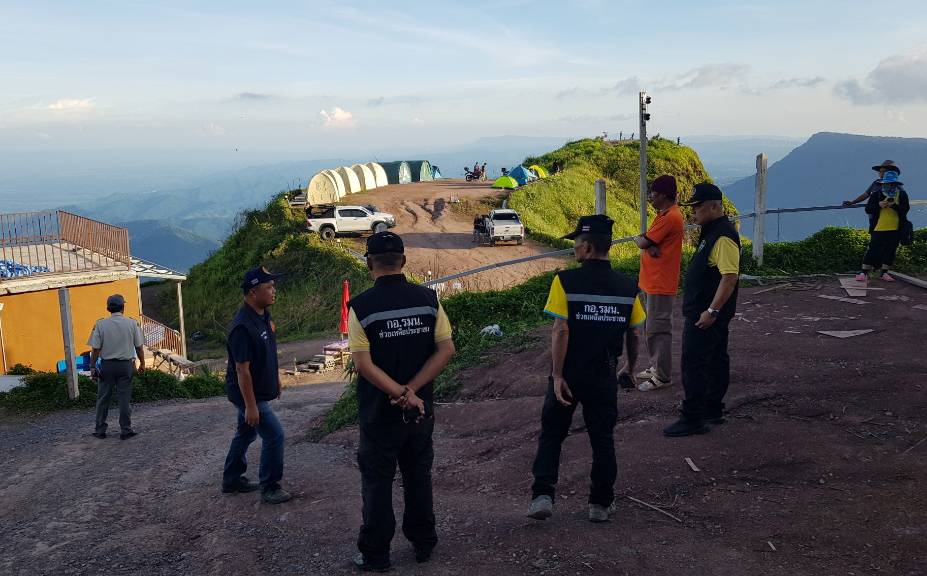 Security and forestry authorities on Thursday inspect seven tents and other structures seen spoiling the scenic Pha Hua Sing on the mountain. (Photo by Sunthorn Kongwarakhom)

Mr Kuaneng, an ethnic Hmong, and at least two other people owning the plots near Pha Hua Sing were ordered to demolish all structures close to the edge of the cliff within 15 days from Friday after they were occupying national forest.

The issue grabbed national attention last week when a tourist posted a video clip showing the tents and other structures on the cliff, asking whether the location was state or private property.

After the clip was widely shared, the Natural Resources and Environment Ministry checked an aerial map and found that the cliff was not part of Phu Hin Rongkla National Park. Days later the ministry changed its position, saying the areas around the cliff belonged to the private owners but a small part of the cliff was a section of another national park, Khao Khor.

The owners said they had believed the area was their property.

At least three landowners must dismantle encroaching structures, including seven tents, a concrete building under construction, one finished cabin and four still being built, toilets, and campgrounds. So far only the seven tents have been removed.

The landowners installed a barrier to block the entrance to the cliff on Friday and removed it on Saturday, claiming the blockade was to prove to authorities that they did not allow tourists to use the structures illegally built by them. 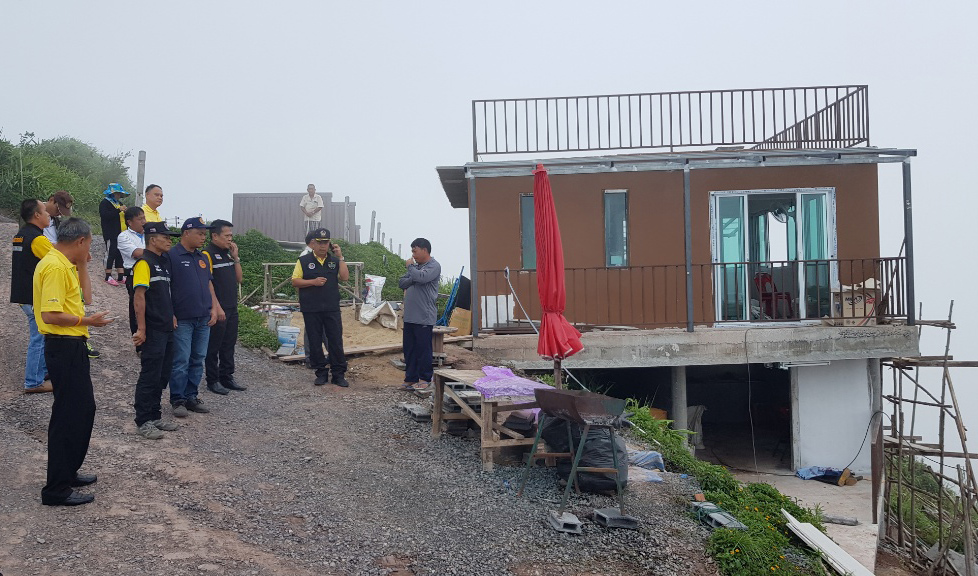 Kuaneng Thor, an ethnic Hmong (right), talks to authorities on Thursday before an official order for him and at least two other owners to remove structures on Pha Hua Sing was posted on Friday. (Photo by Sunthorn Kongwarakhom)

Col Pongphet Ketsupa of the Internal Security Operations Command, who joined other agencies in tackling the problem, said on Sunday the cliff was cleared for all tourists to visit. More action will be taken if the landowners nearby obstruct the entrance, he added.

Phu Thap Boek is not a national park. Located 1,500 metres above sea level, it is the highest peak in Phetchabun. It is a popular attraction but the mountain is tainted by illegal land encroachment and misuse of the plots. The state allocated land to people, most of them Hmong, to preserve their livelihoods after the end of the fight against the now-defunct Communist Party of Thailand. Some, however,  have turned agricultural farmland into resorts or leased the plots to outsiders.

A Great Team is the Secret to Success – Shane Currey