Police have defended their decision to revoke all arrest warrants for billionaire hit-and-run suspect Vorayuth “Boss” Yoovidhya, saying they could face negligence charges if they continued to pursue a case that prosecutors have dropped.

An investigator confirmed on Saturday that all warrants in the systems of Interpol, the Immigration Bureau and the Office of the Royal Thai Police had been revoked.

To withdraw a warrant issued by a court, the officers will have to wait for the court to reopen on Wednesday after the long holiday weekend. After that, they would inform Mr Vorayuth, said Pol Lt Col Thanawut Sa-nguansuk, deputy superintendent for investigation at the Thong Lor police station in Bangkok.

The decision to drop all charges against the 35-year-old scion of the Red Bull energy drink empire has sparked public outrage over the impunity enjoyed by the rich in Thailand.

But police say they are duty-bound to comply with the decision of the Department of Southern Bangkok Criminal Litigation. Prosecutors there decided late last month not to press the remaining outstanding charge of reckless driving causing death against Mr Vorayuth. The statute of limitations on the charge still had seven years to run. The news only emerged this week in a story broken by CNN.

If police continued to seek an arrest, they could face prosecution under Section 157 of the Criminal Code, which covers dereliction of duty by public officials, said Pol Lt Col Thanawut.

Mr Vorayuth was accused of driving his black Ferrari when it hit the rear of a policeman’s motorcycle at high speed, dragging his body along Sukhumvit Road before speeding away in the early morning of Sept 3, 2012. The victim was Pol Sgt Maj Wichian Klanprasert, 47, who was based at the Thong Lor station.

A source familiar with the case said Mr Vorayuth’s lawyer had met a lawyer representing relatives of the dead policeman and they agreed on compensation payments in an out-of-court settlement. The relatives reportedly decided not to file civil and criminal suits against Mr Vorayuth.

However, nobody has seen a document about the agreement regarding the settlement. The Office of the Attorney General has not commented on the case.

According to the source, Pol Sgt Maj Wichian was in a relationship with Nongnut Saengprapas but the couple never registered their marriage and they had no children. They ended their relationship before the officer was killed.

Ms Nongnut reportedly raised the issue of compensation in 2016 with Pol Lt Gen Sanit Mahathavorn, then commissioner of the Metropolitan Police Bureau. However, she has not commented on the matter since.

After CNN broke the news about the dropping of the last remaining charge against Mr Vorayuth, neither the police nor the Office of the Attorney-General gave any details about the factors that led to their decision. They only maintained that everything was done by the book.

But on Saturday, a former senior police officer long known as a crusader for police reform offered some insights into what might have happened in an interview on the Tam Sud Soi TV programme on NationTV22.

Pol Col Wirut Sirisavasdibut, now a member of the House justice subcommittee, said it could be argued that what actually happened and what was alleged in the various cases filed were different stories.

According to news reports at the time, Mr Vorayuth struck the policeman’s motorcycle while driving home at high speed at 5am. He did not stop and went straight home.

Among the charges laid was driving under the influence of alcohol, but Pol Col Wirut said the investigation never established that Mr Vorayuth had been drunk when the crash occurred at 5am.

“There was a possibility that he might have been drunk later, but not during the crash,” he said. “When police surrounded his house demanding to see him at 8am, they did not do an alcohol test on him and we don’t know why. It was only done in the evening.”

The test showed Mr Vorayuth had alcohol in his blood but he maintained he only started drinking at midday because of the pressure. Therefore, prosecutors had no hard evidence against him on this charge, said Pol Col Wirut.

It was also unclear whether they made the effort to question more people who might have known if the suspect had been drinking before the crash since they have the power to do so. The outcome, however, indicated that they might not have done this, and the charge was dropped.

As for the speeding charge, for which the statute of limitations later expired, police claimed there were no closed-circuit cameras on that section of Sukhumvit Road.

“Before the age of cameras, police used braking traces to determine speed but police insisted only that there were no cameras so they had no evidence,” said Pol Col Wirut.

Importantly, the investigation found it was the victim who had cut in front of Mr Vorayuth’s car — the policeman changed lanes from left to right abruptly. “It’s unclear what evidence police had for this. A vendor might have given a statement to that effect,” he said.

On the charge of driving recklessly causing damage to property, he said the statute of limitations was only one year. “By the time the case was finished, it had long passed.”

As well, he said, if Mr Vorayuth was not drunk or speeding and the crash was caused by the victim cutting in front of him at close range, how could he have been charged with driving recklessly?

As for the charge of failing to stop to help a victim, the colonel said Mr Vorayuth did not fight it, but again the five-year statute of limitations expired before the case could go anywhere.

As for the major charge of driving recklessly causing death, since Mr Vorayuth was cleared of driving under the influence of alcohol, whether he was speeding was also questionable.

“Prosecutors told police to find out what speed he was driving using other methods, and it showed he might have exceeded the 80km/h speed limit. However, it was not 100%. Importantly, the statute of imitations for speeding had already expired and his speeding case was not sent to court.” 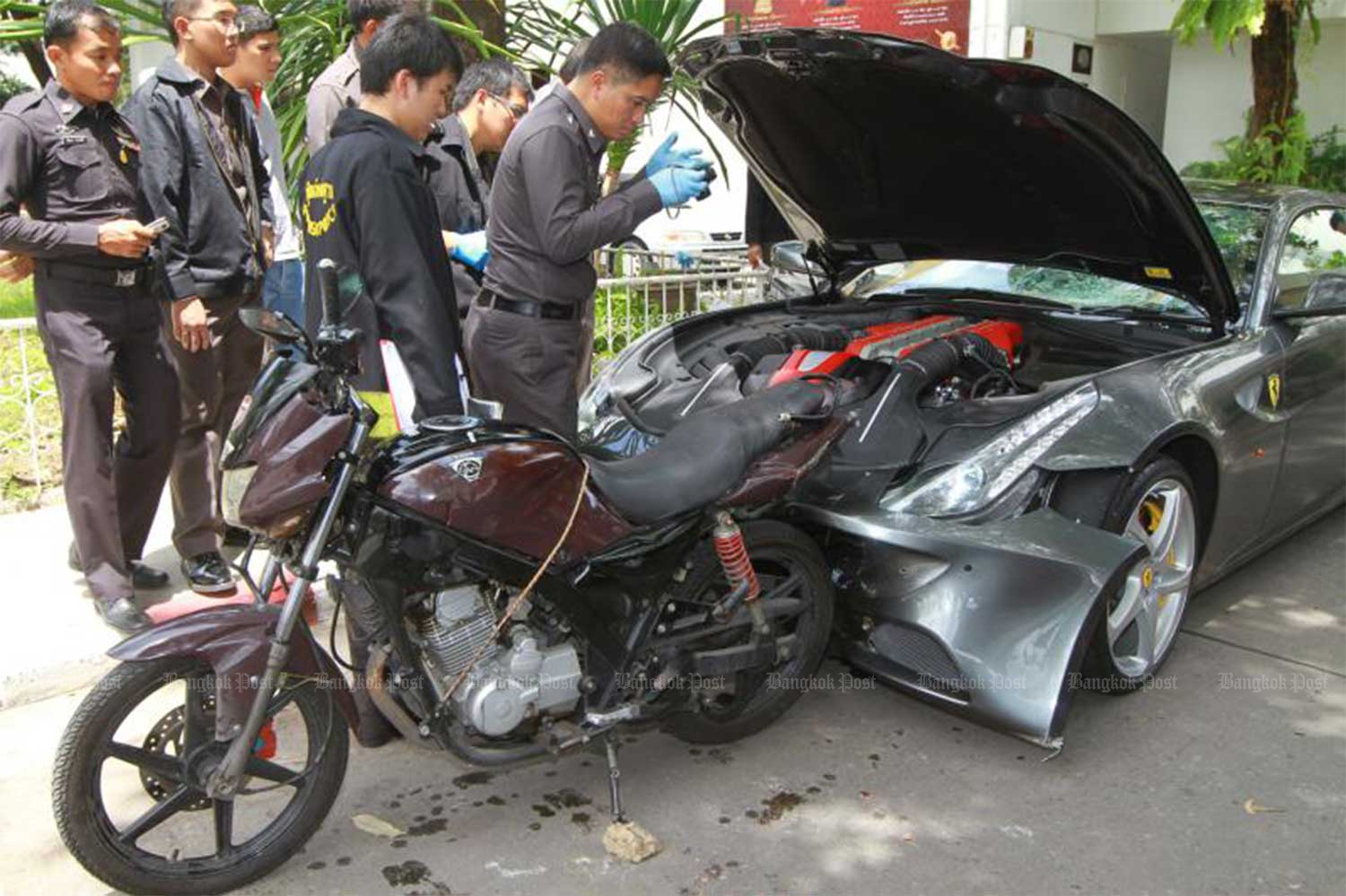 Forensic police inspect the motorcycle belonging to Wichian Klanprasert and the Ferrari driven by Vorayuth Yoovidhya following the accident that killed the police officer in September 2012. (File photo by Somchai Poomlard)