Beheading of Buddha image in Pattani not religious conflict: Isoc

PATTANI: The decapitation of a Buddha image inside Wat Wimonwathanaram, a Buddhist temple in Sai Buri district of this Muslim-dominated southern border province, was the work of a temple boy and not a religious conflict, the Region 4 Internal Security Operation Command (ISOC)'s advance headquarters said in a statement on Saturday.

The head of "Phra Chao Ong Dam", a Buddhist image situated under a bodhi tree inside the temple known locally as Wat Hua Khao in tambon Taluban, was found to have been cut off on the night of July 27. 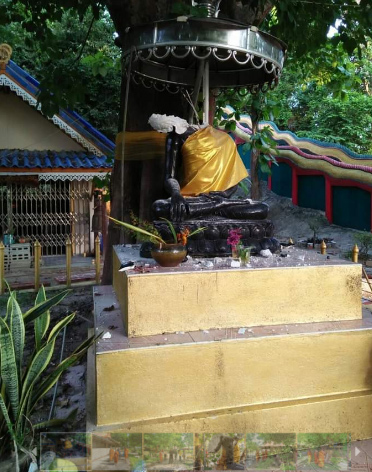 A Buddha image at Wat Wimonwathanaram in Sai Buri district of Pattani is seen decapitated. Police suspect it was the work of a temple boy. (Photo by Adbullah Benjakat)

Police recovered a hammer, an axe, a long-handle knife and a white long-sleeved T-shirt from the area.

From an investigation and examination of security camera footage, police suspected it was the work of Kriangsak Thepracha, a man who had lived in the temple and was called dek wat or temple boy. Mr Kriangsak initially denied it was he who damaged the Buddha image, saying he was outside the temple grounds when it took place.

However, in further investigation the police found solid evidence against Mr Kriangsak and issued a warrant for his arrest for "damaging a Buddhist image or a revered religious object in a temple or a religious place."

The statement from the Region 4 Isoc said that what happened was not a religious conflict but the work of a person who lacked morality and  respect for the law.