Suspect Theeraphol Duangkrathok, 26. Arrested on Thursday and charged with stabbing to death a 29-year-old woman, a wife of a Singaporean businessman, at her house in Nakhon Ratchasima on Tuesday afternoon. (Photo: Prasit Tangprasert)

Police found Theeraphol Duangkrathok, 26, of Chaiyaphum province, hiding in a rough shelter in a paddy field in Nong Bunmak district.

The suspect allegedly confessed to having killed Natrika Shibahara, 29, at her two-storey house in Muang district of this northeastern province on Tuesday afternoon.

The woman was found dead on her bed in the second floor bedroom with a fatal knife wound to her throat. Police said the room had been ransacked.

Police believed she had died at least 3 hours before she was found.

The woman lived in the house with her 6-year-old daughter. Her husband visited sometimes from Singapore and regularly sent money to her. The woman was alone on Tuesday when attacked.

When nobody picked the daughter up from school on Tuesday afternoon, a teacher took her home.

The teacher knocked on the front door and called out. When there was no response the teacher tried the door. It was unlocked and she went inside, and soon after found the murdered woman.

The suspect told police he worked at an air-conditioning repair shop near the victim’s house. He had cleaned her air-conditioner 4-5 times. On Tuesday he went back to her house on the pretext he had left some tools there.

When she opened the door, he threatened her with a knife and demanded cash and other valuables.

He then forced her to go to her bedroom, because he wanted to search it for the cash and valuables he believed were kept there, according to police.

The woman insisted she kept no money in the house.

The suspect allegedly demanded she transfer money to his bank account, and she deposited 10,000 baht as he ordered.

Then she saw a neighbour walking in front of her house and shouted for help. He responded by stabbing her in the throat to silence her, then stole her car keys and her mobile phone and fled.

According to police, Mr Theeraphol said the dwindling number of clients at the air-conditioning shop led him to decide to rob her. He had personal financial problems. He said he had not intended to kill her.

Police pressed an initial charge of murder against him, and were compiling evidence for additional charges, including theft.

Mr Theerapol had a criminal record, having been arrested four times previously - for theft, physical assault and drug taking, Pol Maj Gen Akkharadet said. He was later taken for a crime re-enactment. 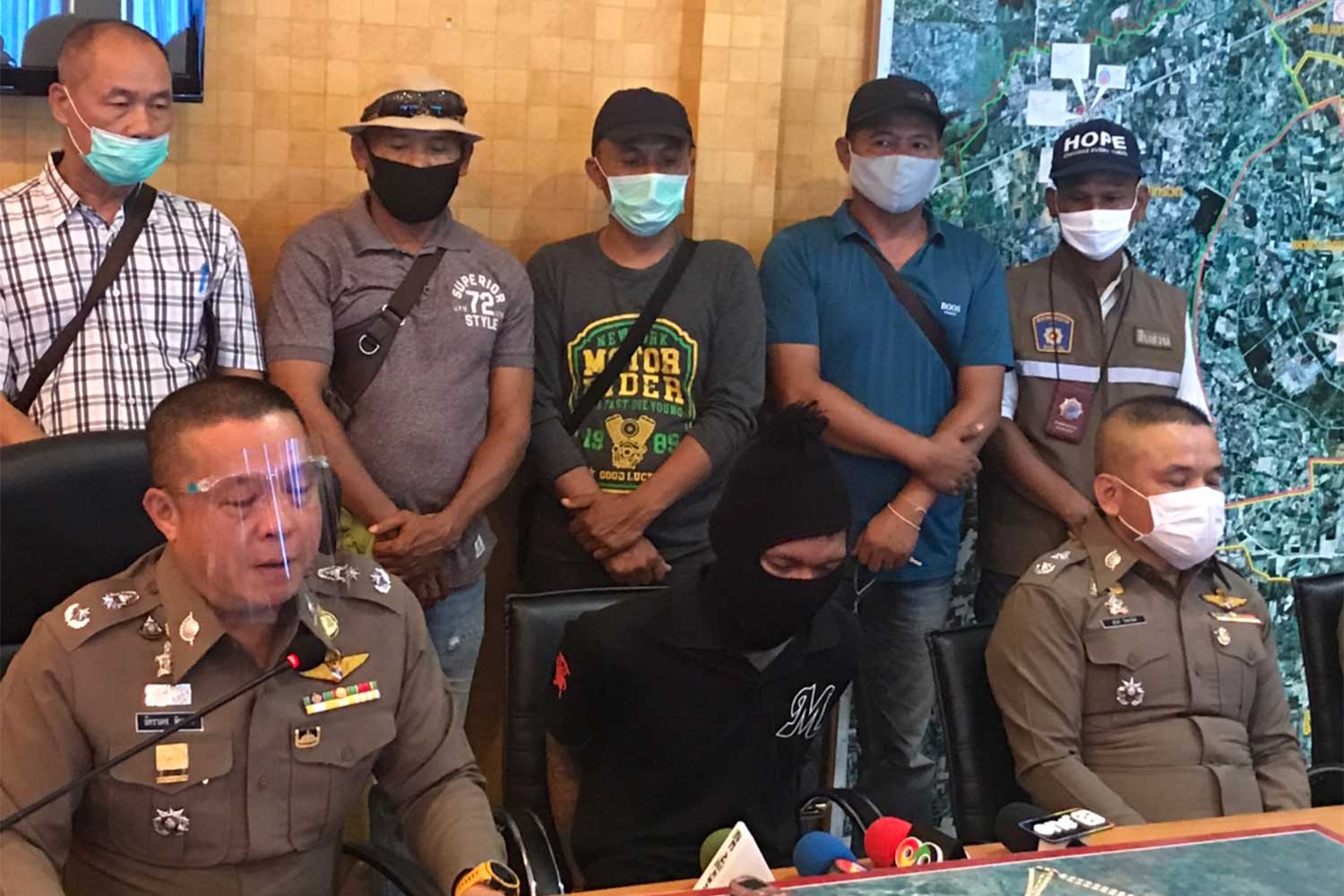 Police hold a media conference to announce the arrest of the murder suspect, wearing a black balaclava, on Thursday.(Photo: Prasit Tangprasert)